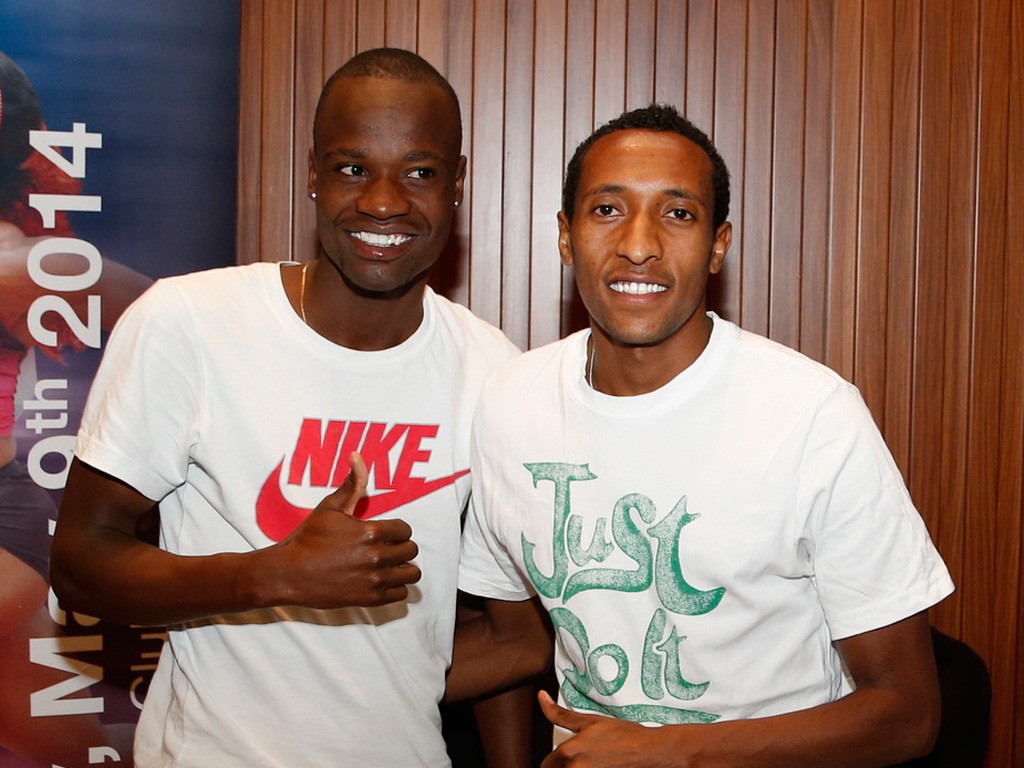 African 800m stars Mohammed Aman of Ethiopia and Nijel Amos of Botswana met the media at the Intercontinental – The City Hotel on the eve of the 2014 IAAF Diamond league meeting in Doha.

The reigning world champion outdoors and indoors [link id=”256″ tax=”post_tag” text=”Mohammed Aman”] just arrived to Doha in early morning and did not have much time for proper sleep. But he looked ready and determined ahead of the meet on Friday.

“I have my special recipe how to stay fresh and relaxed. You have to drink a lot of water to recover fast,” revealed the 20-year-old who returns to Doha after his defeat to [link id=”198″ tax=”post_tag” text=”David Rudisha”] last year.

The world 800m record-holder and London 2012 champion David Rudisha from [link id=”81″ tax=”category” text=”Kenya”] was initially on the Doha slate but was forced to withdraw due to injury.

“I am very sad for him because every injury is bad and hard to recover from on such a high level but I wish him all the best and hope he will come back on the same top level as he used to be before,“ said Aman, who with his 2012 victory in Zurich was the last man to beat Rudisha.

“But I do not train only because of Rudisha. Other runners are also very strong,” he said with a smile.

“We are good friends but we like to push each other. I will have a big support in the crowd as many Ethiopians are coming to the meet. [Mohammed Aman]

The man to beat in the field is the returning star [link id=”424″ tax=”post_tag” text=”Nijel Amos”], silver medallist from 2012 London Olympic Games. The 20-year-old is a friend of Aman and they know each other already from junior competitions.

Amos won gold at the 2013 Universiade in Kazan and 2012 World Junior Championships in Barcelona at 800 metres. But last year he took a break from athletics and returns on the world stage here in Doha for the first time since last July.

“I had to get off the track and recover from track and field last year. So, I worked as a DJ and it was fun. Music helps against stress. But I do not do it at the moment,” revealed the world junior record holder with his best mark of 1:41.73 from London.

“I missed the world championships last year, so I am hungry for new improvement. I will see how it goes in Doha tomorrow,“ added Amos, who like Aman, hasn’t prepared any special tactics.

“We are good friends but we like to push each other. I will have a big support in the crowd as many Ethiopians are coming to the meet. That will give me good energy and motivation to fight, despite the fact that normally you cannot hear them and you just focus on your opponents and on the race,“ added Aman.

The world record is not a utopia for the Ethiopian star. “I will do my best here in Doha but I cannot predict any concrete time. It is my first appearance outdoors this year. Without Rudisha, we take the responsibility for a good result,” smiled Aman who doesn’t avoid answer about possible record assaults.

“I am thinking about it. When I see my progress, this year it is very possible if my training results show it right and if it is a God´s will. I can get very close to it.”

“I fulfilled my dream last year about becoming the world champion. Now, I focus on Olympic gold. It is not easy to find a proper coach to achieve this but I guess I have him now and we train around Addis Ababa most of the time.”

Both runners have one thing in common. They like football and follow it in their free time. And both want to win in the best time in Doha on warm Friday night.

“I used to play when I was a kid but it is a group sport and you never succeed alone. So now I am in athletics,” revealed Amos, who is a real sport celebrity at home, being recognised on the streets and shopping malls.