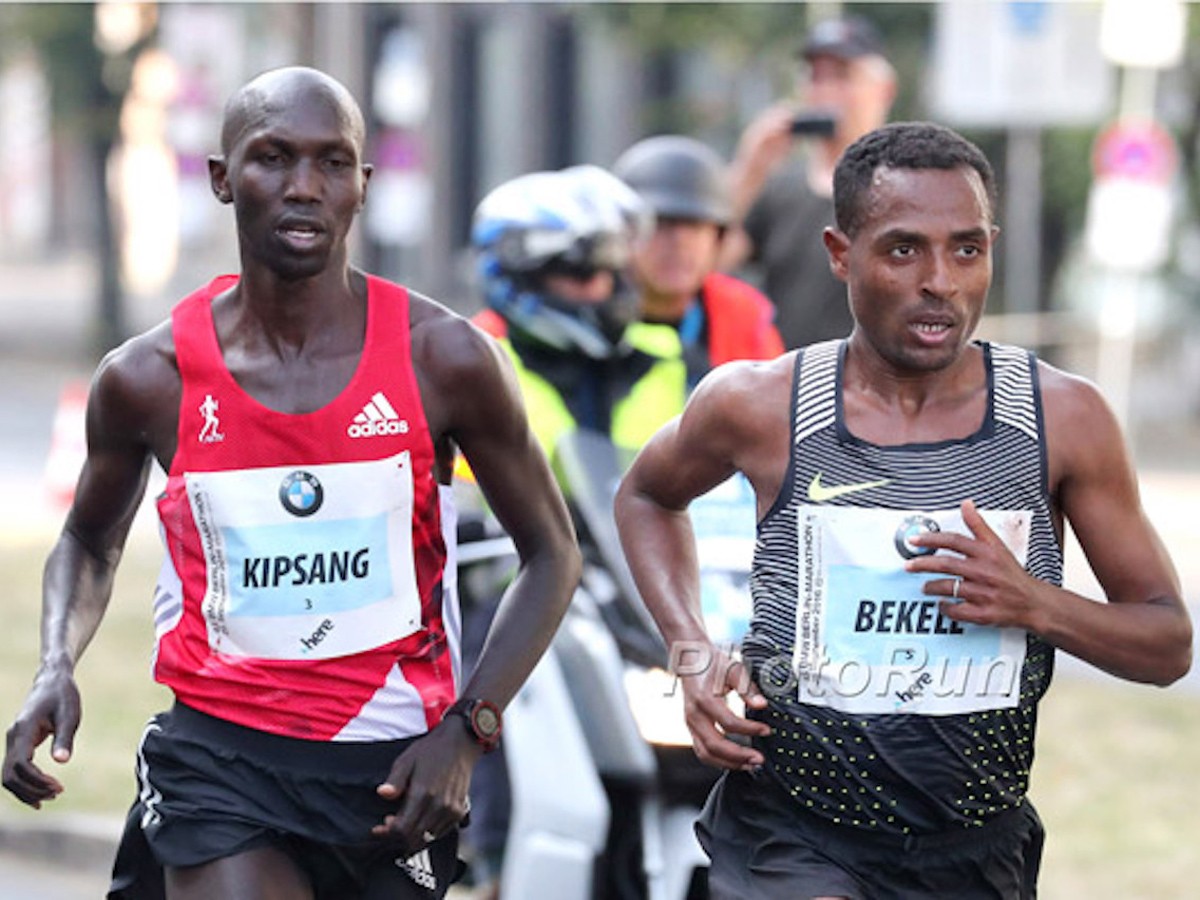 Ethiopia’s Kenenisa Bekele established himself as the second fastest marathon runner ever, winning the BMW BERLIN-MARATHON with a time of 2:03:03 on Sunday.

In a thrilling duel Kenenisa Bekele beat Kenya’s Wilson Kipsang. While he missed the world record of Kenya’s Dennis Kimetto by just six seconds he smashed the Ethiopian record of Haile Gebrselassie, who had won the BMW BERLIN-MARATHON back in 2008 with a then world record of 2:03:59.

Kenya’s Olympic Champion Eliud Kipchoge was the world leader for the year before Berlin with a time of 2:03:05 from London in April.

Kipsang, who ran a world record of 2:03:23 in Berlin three years ago, was second with a personal best of 2:03:13. It was only on the final kilometre that the Kenyan could not match Bekele’s finishing pace.

Evans Chebet of Kenya took third with a fine 2:05:31. Only once has there been a faster marathon as far as the finishing times of the first two men are concerned.

When Dennis Kimetto ran the current world record of 2:02:57 in Berlin two years ago fellow-Kenyan Emmanuel Mutai was second with 2:03:13.

Ethiopia’s Aberu Kebede took the women’s race in a world-class time of 2:20:45, which is the second fastest time in the world this year.

In all, 41,283 runners from 122 countries entered the 43rd edition of the race, which belongs to the Abbott World Marathon Majors and is an IAAF Gold Label Road Race.

The pace by the men in the early stages was incredibly quick. A 5km split of 14:20 was the kind of tempo to take them across the finishing line close to the magical barrier of the sub-two hour marathon.

Not unexpectedly, the pace slowed but, at halfway with the pacemakers having made an early exit several kilometres previously, the lead group was timed at 61:11 which still put them inside the world record of Dennis Kimetto, who had run 2:02:57 in Berlin in 2014.

The man who broke up the five-strong leading group was Wilson Kipsang with his surge shortly before 30 kilometres. The Kenyan’s attack ripped apart the group also comprising Kenenisa Bekele and Kipsang’s compatriots Alfers Lagat and Evans Chebet along with Bekele’s fellow Ethiopian Sisay Lemma.

Kipsang made three attempts to drop Bekele, the world record holder at 5 and 10,000m on the track. He built the lead up to 20 metres but the Ethiopian always had a response, showing that his marathon best of 2:05:4 going into Berlin was on course for a major improvement.

Kenenisa Bekele found something extra to take the lead in the final kilometre, breaking away for the greatest road race victory of his career, achieving a special landmark into the bargain despite going to close to the world record.

“I’m so happy to have broken the Ethiopian record of Haile Gebrselassie,” said the 34-year-old Bekele. “I’m a little disappointed as well, since I didn’t break the world record. But I hope I can come back here again and get a second chance. Towards the end of the race I had a few problems with my hamstrings but otherwise was ok.2

Wilson Kipsang also hoped it would be second time lucky for him. “I was going all out to break the world record but couldn’t quite do it. But there’s always another time.

Overall I ran very well and felt very relaxed. It was a great race with Kenenisa Bekele, even though I finished second,” explained Kipsang, who did most to push the pace throughout and perhaps used more energy than Bekele as a front runner.

The Kipsang family had more than one runner on the start list over the weekend: Wilson brought his eldest son Bethuel to watch him in action for the first time at a major race.

The 12-year-old ran the Mini-Marathon on Saturday for schoolchildren, held over a tenth of the marathon distance. He didn’t have the best of starts, having to pick himself up after a fall and ran on to finish.

His father commented that this was his first chance to gain experience of international competition!

The women were also fast in getting underway. Birhane Dibaba, Ruti Aga and Aberu Kebede soon formed a leading group, going through 10km in 33:12.

After 17km Aberu Kebede, in search of her third Berlin victory, was out in front and led through halfway in 69:27. At 30km the 30-year-old Ethiopian running splits which would take her inside the course record.

That record stood at 2:19:12, set by Japan’s Olympic champion Mizuki Noguchi in 2005. But with 10 kilometres remaining, Aberu Kebede lost some vital energy, finishing in 2:20:45 instead of achieving her ambition of breaking 2:20.

“But I’m very happy to have won her for the third time. It was a big ambition to break 2:20 and it still is. I hope to have another chance to achieve this in Berlin,” said Aberu Kebede.