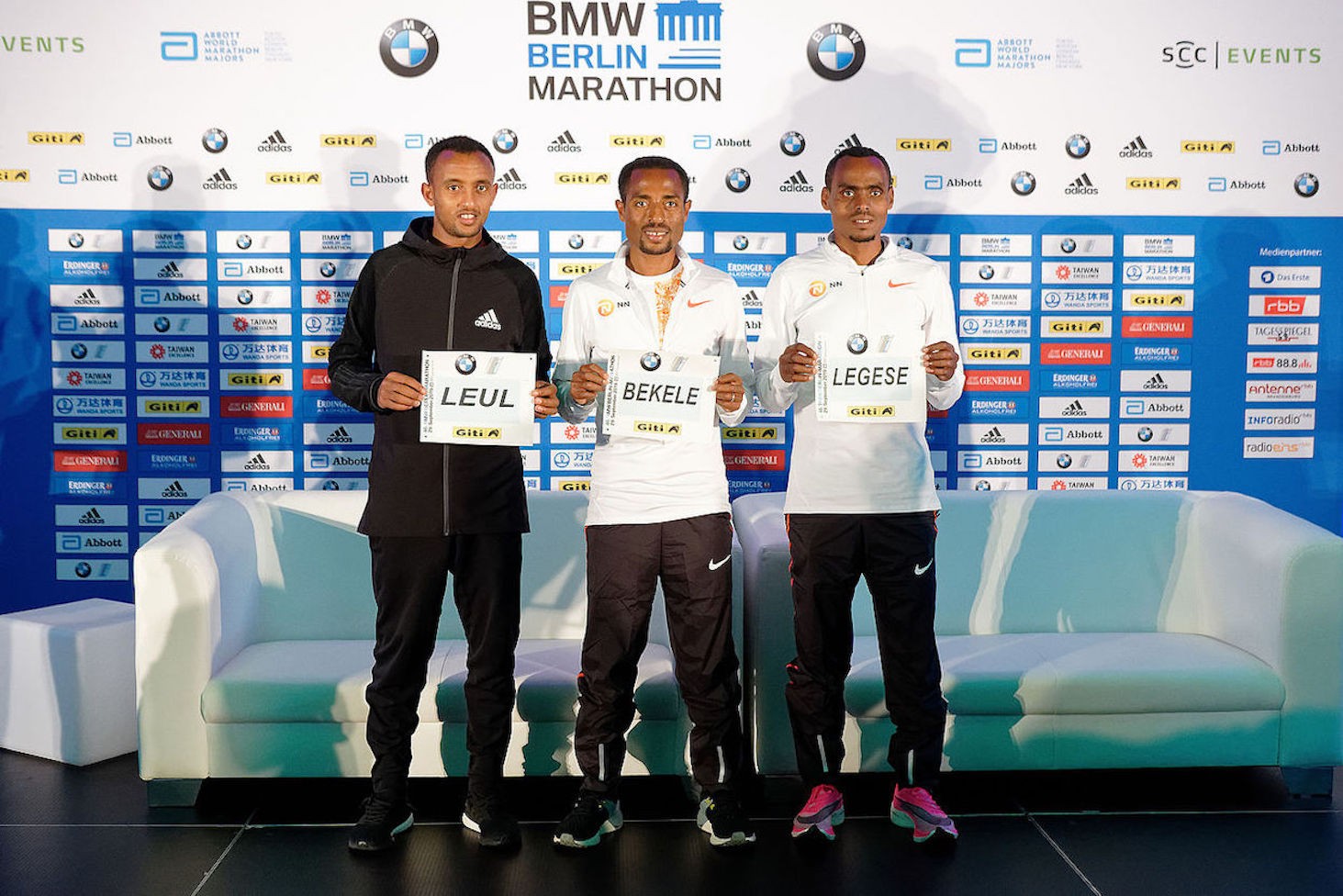 A super fast and exciting men’s race is in prospect at the BMW BERLIN-MARATHON on Sunday. In Year One of Marathon history after Eliud Kipchoge of Kenya’s fabulous world record of 2:01:39 here in 2018, an attack on the world record has not been a subject for discussion.

That isn’t to say that the fastest time in the world this year, Kipchoge’s 2:02:37 in London in April, might not come under threat.

The fastest man in the field is Ethiopia’s superstar on all surfaces, Kenenisa Bekele, who ran his personal best of 2:03:03 to win the BMW BERLIN-MARATHON three years ago.

The likeliest challengers to the triple Olympic champion are his fellow countrymen. As for the home contingent, the leading German runner is Philipp Pflieger. His priority is running the Olympic qualifying time of 2:11:30 for the Games in Tokyo next year.

The BMW BERLIN-MARATHON already has one landmark for its 46th edition and that is a record entry of 46,983.

The marathon runners will set off at 9.15 on Sunday morning on the Avenue of June 17 while the handbikers and wheelchair competitors will be earlier into the action, starting at 8.50am.

The organizers, SCC EVENTS, are expecting their one millionth finisher, calculated to cross the line at around 2pm.

“It is fantastic to have achieved this figure and shows the great tradition of our event,” said
Jürgen Lock, the chief executive of SCC EVENTS.

For the first time the BMW BERLIN-MARATHON will be the final race in an Abbott World Marathon Majors (AWMM) series. In addition to Berlin the series comprises races in Boston, London, Chicago, New York and Tokyo.

The BMW BERLIN-MARATHON is also an IAAF Gold Label road race, the highest category awarded by the International Athletics Federation.

“After the fabulous world record by Eliud it was always going to be hard to beat that,” said race director Mark Milde.

“I think it’s safe to say we are not going to see a world record attack and people running at 2:01 pace. But I expect there to be a compact lead group, running at around 2:03 finishing time.”

With a time of 61:30 for halfway under discussion, a world best for the year would be within reach. For each of the last eight years, the streets of Berlin have been the setting for the fastest men’s marathon time in the world – a record in itself.

The BMW BERLIN-MARATHON is by some way the fastest marathon in the world although the world best for the year has never been as fast: Eliud Kipchoge ran 2:02:37 to break the course record at the London Marathon in April.

Kenenisa Bekele hopes to produce a performance close to that of his Berlin win in 2016.

“Overall I have prepared well although my training period of three months is perhaps rather short for a marathon.

“This was because of an earlier injury. But I am ready for Sunday and want to show what I can do,” said the best long distance track and cross-country runner of all time who recently has struggled to produce convincing performances in the marathon.

Victory in all but one of the last nine BMW BERLIN-MARATHON men’s races has gone to a Kenyan. The only one to break this victorious Kenyan sequence has been Kenenisa Bekele in 2016.

This year there is good reason to expect a transformation with Ethiopians taking the lion’s share of success.

An Ethiopian trio with world class times will be lining up at the start since Leul Gebrselassie has run 2:04:02, Sisay Lemma 2:04:08 and Birhanu Legese has 2:04:15 to his credit.

“I have spent five months preparing for this race and am delighted to be in a race against Kenenisa Bekele – I used to dream about this,” said Leul Gebrselassie while Birhanu Legese, winner of the Tokyo Marathon this year, commented succinctly: “I am ready for a fast time.”

Elite Men with their Personal Bests: