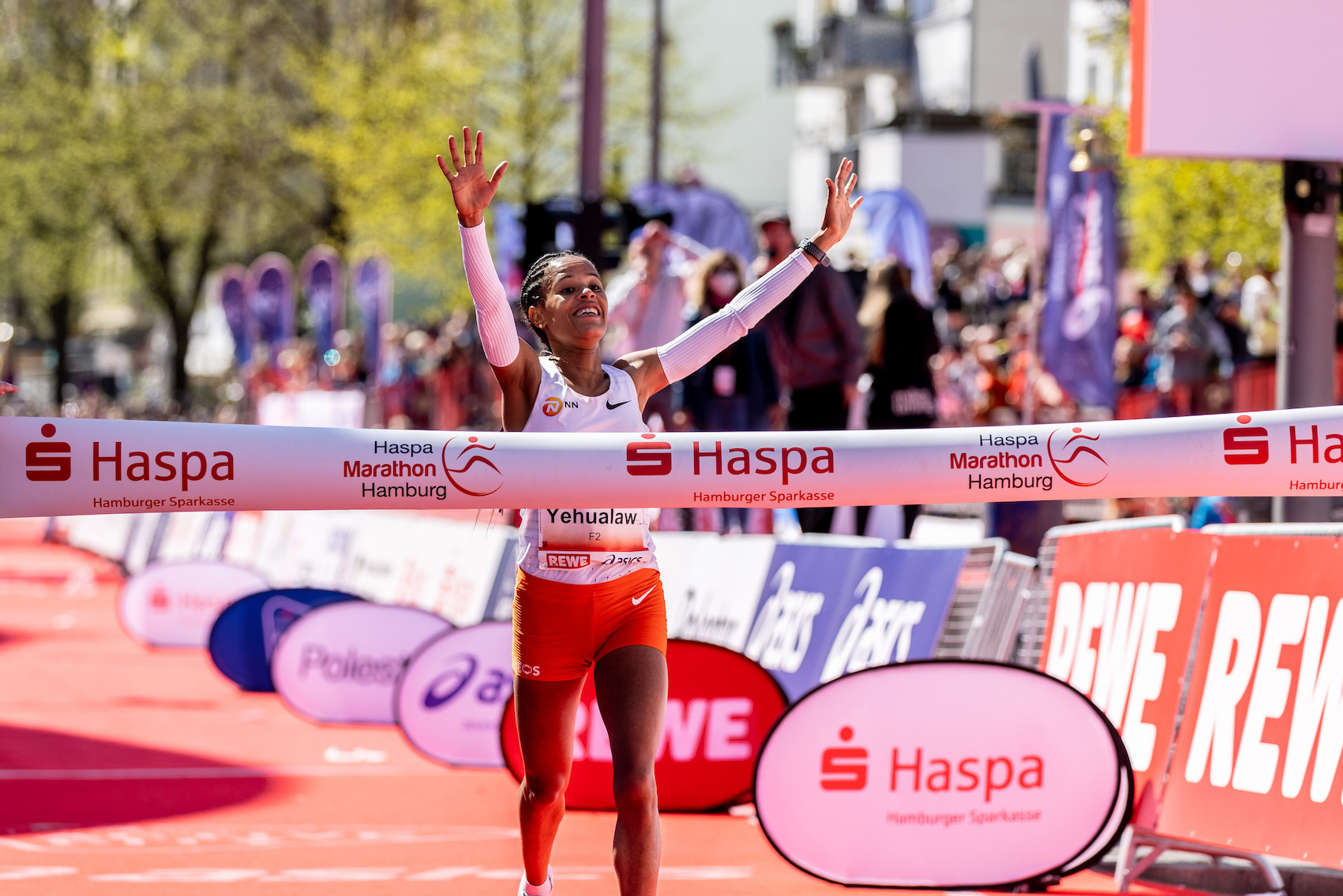 Yehualaw became the sixth fastest woman in the history of marathon running, broke the course record and set a German All-comer record.

In the men’s race Eliud Kipchoge’s 2:05:30 course record from 2013 was broken by fellow-Kenyan Cybrian Kotut.

A total of 20,000 entries from 68 nations were registered by organisers for the 36th edition of the Haspa Marathon Hamburg, including shorter running events on Sunday.

Around 10,500 of them competed in the marathon. Additionally 9,000 children participated in a 4.2 km run on Saturday.

“That was a great spring comeback for us. We presented a stunning race on the streets of Hamburg and we are proud of the extremely strong results including two course records and a unique debut by Yalemzerf Yehualaw,“ said chief organiser Frank Thaleiser.

Yalemzerf Yehualaw came in late on Thursday and missed the pre-race press conference, but she took centre stage on Sunday when it mattered.

In sunny but windy conditions and temperatures around 10 Celsius Ethiopia’s Yehualaw dominated the women’s race from the beginning and constantly increased her lead.

She ran past the half marathon mark in a super fast 68:30. At this point she was already over two and a half minutes ahead. At the end of the race the gap between her and the second runner was almost nine minutes.

“The race went well for me considering this was my first marathon. The fast Hamburg course suited me and the spectators helped me a lot,“ said the winner.

Yalemzerf Yehualaw was around four and a half minutes faster than former Hamburg course record holder Meselech Melkamu of Ethiopia (2:21:54 in 2016).

Additionally she broke the German Allcomers record of Kenya’s Gladys Cherono who ran 2:18:11 in Berlin in 2018.

In the men’s race things looked a lot closer from the beginning. 17 men passed the 10km mark in 29:29. A major surge came late in the race with only four kilometres to go.

Cybrian Kotut and Stephen Kissa, a debutant from Uganda, broke away from the leading group which included six runners at that point. Both delivered a stunning showdown right to the finish line.

All three runners were within the former course record of Eliud Kipchoge which stood at 2:05:30. The Kenyan superstar set this record back in 2013 running his marathon debut in Hamburg.

’’I am very happy that I broke the course record. The pacemakers covered me well from the wind. It was not easy with the wind, but overall the conditions were very good,“ said Cybrian Kotut.

The fastest German runner was Florian Röser. He ran a solid marathon debut in 2:15:03. ’’I’m very surprised to be the fastest German athlete. The race was not ideal for me but considering that this was my debut it was good,“ he said.