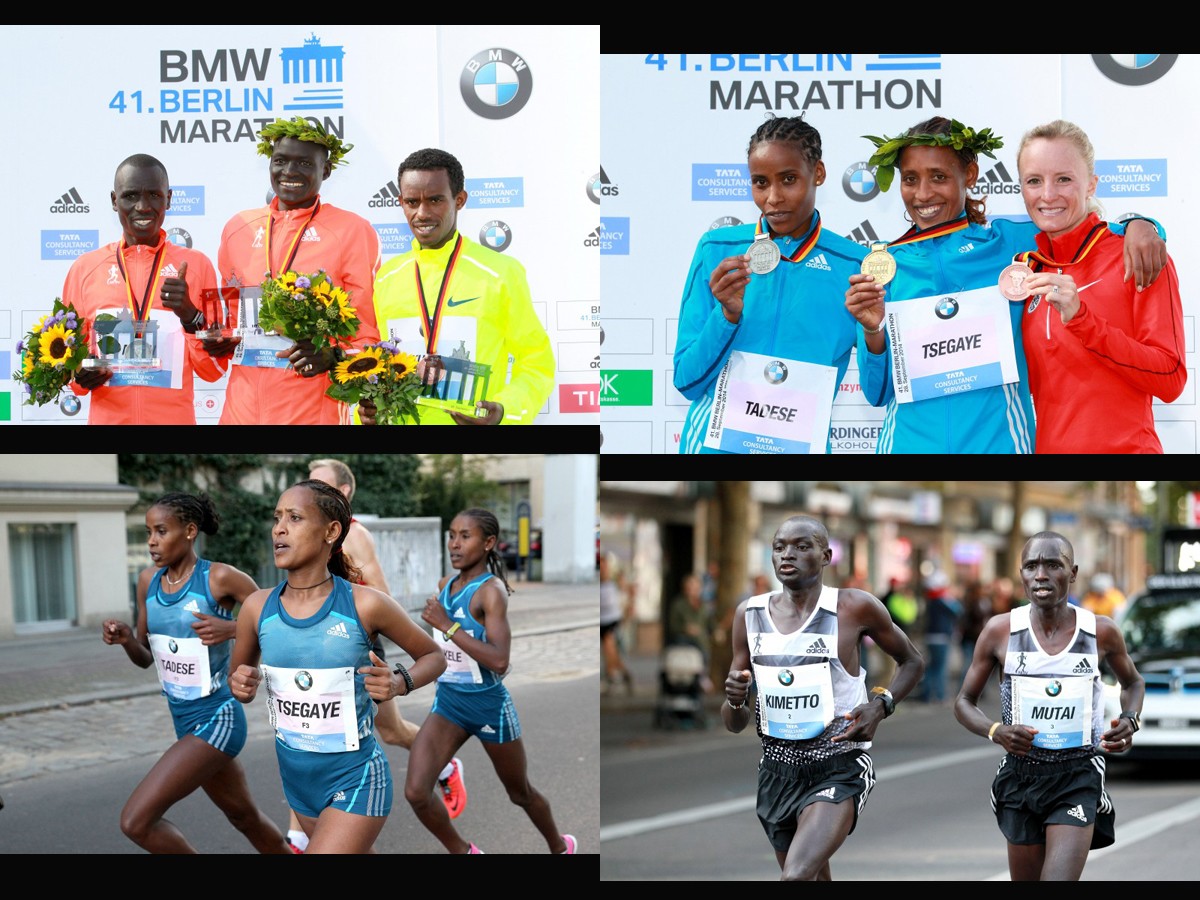 A new chapter in the history of men’s marathon was opened with a magnificent flourish by Dennis Kimetto of Kenya in Berlin on Sunday.

In only his fifth race at the distance, the Kenyan smashed the 2:03 barrier a year after his compatriot [link id=”299″ tax=”post_tag” text=”Wilson Kipsang”] had brought the world record down to 2:03:23 on the same course.

Kimetto’s is the tenth world record on a course which makes full use of Berlin’s flat terrain and gentle corners.

Ethiopia’s [link id=”293″ tax=”post_tag” text=”Tirfi Tsegaye”] fulfilled her ambition of ascending to the top place on the podium as the 2012 Berlin runner-up took just over a minute off her personal best to win in 2:20:18, the fastest time in the world this year and nine seconds ahead of her training partner [link id=”564″ tax=”post_tag” text=”Feyse Tadese”].

Shalane Flanagan attacked early in the race and led through halfway, on course to break the American record, but faded to finish third in what was nonetheless her fastest ever time of 2:21:14.

Every leading finisher agreed that conditions could hardly have been better for the starting gun to set just over 40,000 on their way from the Avenue of June 17 at 8.45 am. Temperatures rose to around 15 Celsius while the elite were racing on a still and piercingly bright morning. 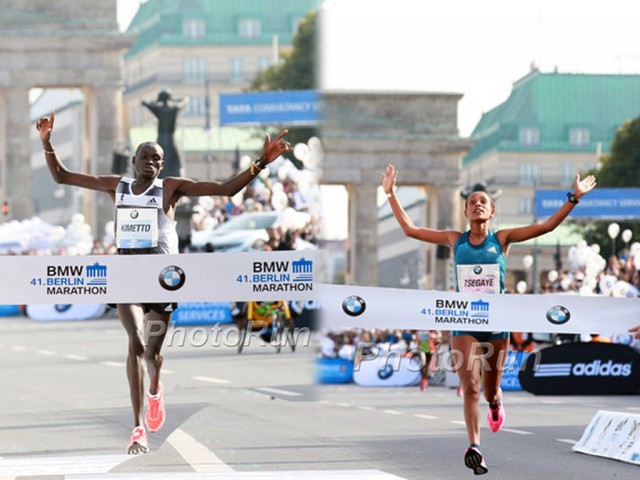 First of the favourites to drop off the pace was [link id=”325″ tax=”post_tag” text=”Tsegaye Kebede”], the current leader in the World Marathon Majors Series. The diminutive Ethiopian was off the pace before 20km. A group of five avowed racers, led by a trio of pacemakers, went through halfway in 61:45, on target for an attack on Wilson Kipsang’s world record of 2:03:23.

The pace had slowed to some 15 seconds outside world record pace but memories were still fresh of how Wilson Kipsang had produced an extraordinary late surge 12 months ago.

The clock showed 1:36:01 for 33km, right on world record schedule and even better was to follow. Kamworor had to yield to the torrid pace as Kimetto and Mutai ran 2:47 for the next kilometre.

The 35km mark is so often critical in the marathon and this race proved no exception. The duo went through in 1:42:36, predicting a sub-2:03 finishing time by a margin of over 30 seconds.

Dennis Kimetto surged with just over 1:50 on the clock, Mutai could offer no response and the Wilson Kipsang’s world mark had a little over ten minutes left in the record books.

Although Kimetto showed signs of strain as he turned through the Brandenburg Gate and strode for the finishing line, he achieved the dream, taking 26 seconds off the world record. This was after having to drop out of the Boston Marathon in April because of a hamstring injury.

“I felt confident of breaking the world record today. During the race I felt good and believe I can improve it further. I’d like to return and try to break it again next year,” reflected Dennis Kimetto, who retained his relaxed composure as the hubbub erupted around him.

Emmanuel Mutai sliced 39 seconds off his best and was also inside the old world mark.

“I’m still happy with my performance. Dennis was just too strong for me after 30km today but I believe I could also break this new world record,” commentated Mutai.

Mutai had the consolation of at least breaking one world record today: he went through 30km in 1:27:37, improving by one second on Patrick Makau’s time in 2011 en route to his world record.

Abera Kuma proved a revelation in finishing third, achieving a massive personal best by almost four minutes. The Ethiopian has distinguished himself on the track, including 5th place in the 10,000m at the 2013 World Championships.

For much of the women’s race it seemed as if Shalane Flanagan’s aggressive running would be rewarded by breaking Deena Kastor’s American record of 2:19:36 as well as capturing the Berlin title. She went through halfway in 69:38.

Just before 30km, Flanagan lost the lead as first Tsegaye and then Feyse overhauled the American. Flanagan’s hopes of the American record faded, as did her prospect of becoming the 19th women to break 2:20 in marathon history.

Tirfi Tsegaye went clear to improve her personal best by one minute, one second, setting the fastest time in the world this year with 2:20:18.

Feyse Tadese also ran her fastest ever marathon and Shalane Flanagan at least had the consolation of becoming the second fastest US runner ever, having improved her best by four minutes this year with races in Boston and Berlin.

“I have to take stock, assess the race splits and reflect on how I can improve, whether it’s a question of training harder or becoming mentally stronger. I think I need to be stronger over the last 2km, I certainly learned that today,” reflected Shalane Flanagan.

While hopes for a North American record did not materialise there was a South American record in Berlin: Peru’s Ines Melchor clocked 2:26:48 in 8th place. She improved her own mark of 2:28:54 set in the 2012 Olympic Marathon in London.