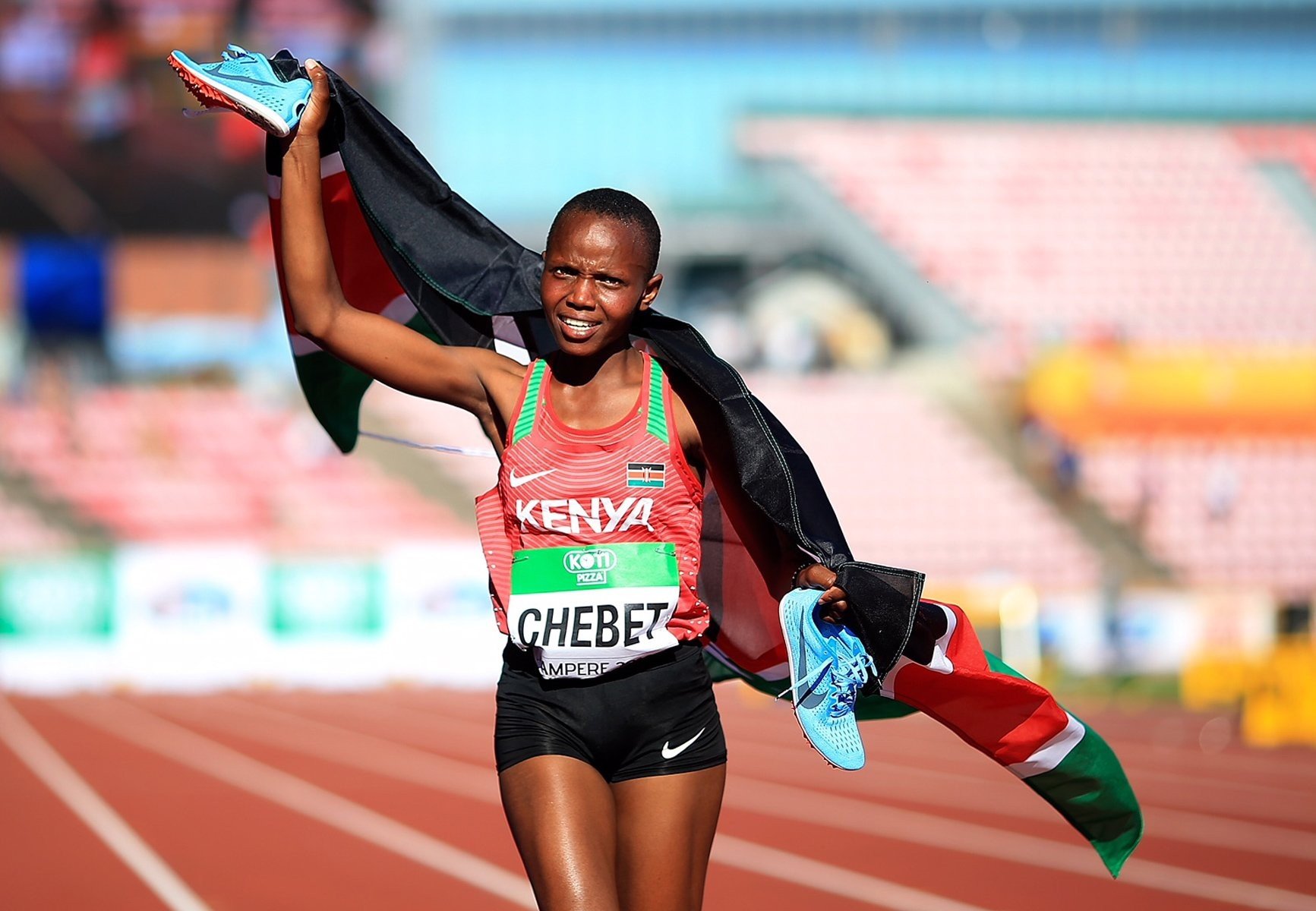 Rhonex Kipruto and Beatrice Chebet earned Kenya two gold medals on the opening day of competition at the 2018 IAAF World U20 Championships in Tampere, Finland on Tuesday.

Propelled by a dazzling and largely solo display, Rhonex Kipruto cruised to the world U20 10,000m title, clocking 27:21.08 to capture Kenya’s ninth title over the distance.

The 18-year-old closed with a 13:23.86 second half, a performance that would have powered him to victory in all but four of the 16 previous 5000m title races contested at these championships. But his came on the back of an opening 13:57.22, and he ran it alone, chasing only the high early evening sun that seemingly never sets in Scandinavia’s mid-summer months.

“I’m very happy, it was a great day,” said Kipruto, whose performance shattered both his previous best of 27:49.6 and the championships record of 27:25.23 set by his compatriot Rodgers Chumo two years ago.

“It was an honour to represent my country and my people. The competitors were tough but I was able to stay focused.”

That he did, with a little early help from teammate Solomon Boit who helped dictate at least some of the pace and take as much power as they could from the legs of Uganda’s Jacob Kiplimo, who was along with Kipruto, a strong pre-race favourite.

From the gun, Kipruto and Kiplimo immediately took to the front with the Ugandan, who finished third two years ago, bringing the field through the first kilometre in 2:50.41. That pace, more than two seconds quicker than the opening 1000 metres in the 2016 record race, hinted that a quick contest was in store.

With Kipruto and compatriot Boit following closely, Kiplimo stayed at the front for the next several laps, reaching two kilometres in 5:40.68 and three in 8:25.42.

The two took turns with the lead over the next few laps but the pace slowed. By four kilometres, reached in 11:13.53, the leading trio were some ten seconds behind championships record pace, seemingly pushing it out of reach.

But two kilometres later, Kipruto unleashed some of the power that pushed him to a 27:08 victory in New York’s Central Park in April, the seventh fastest 10km ever run on a record standard course.

Upping the tempo, Kipruto opened a 10-metre lead with nine laps left, a lead he extended to some 30 metres two laps later. Kiplimo managed to defend the gap over the ensuing three laps, but seemed to hit a wall with one kilometre to go, as Kipruto extended his lead to more than half the distance of the home straight. 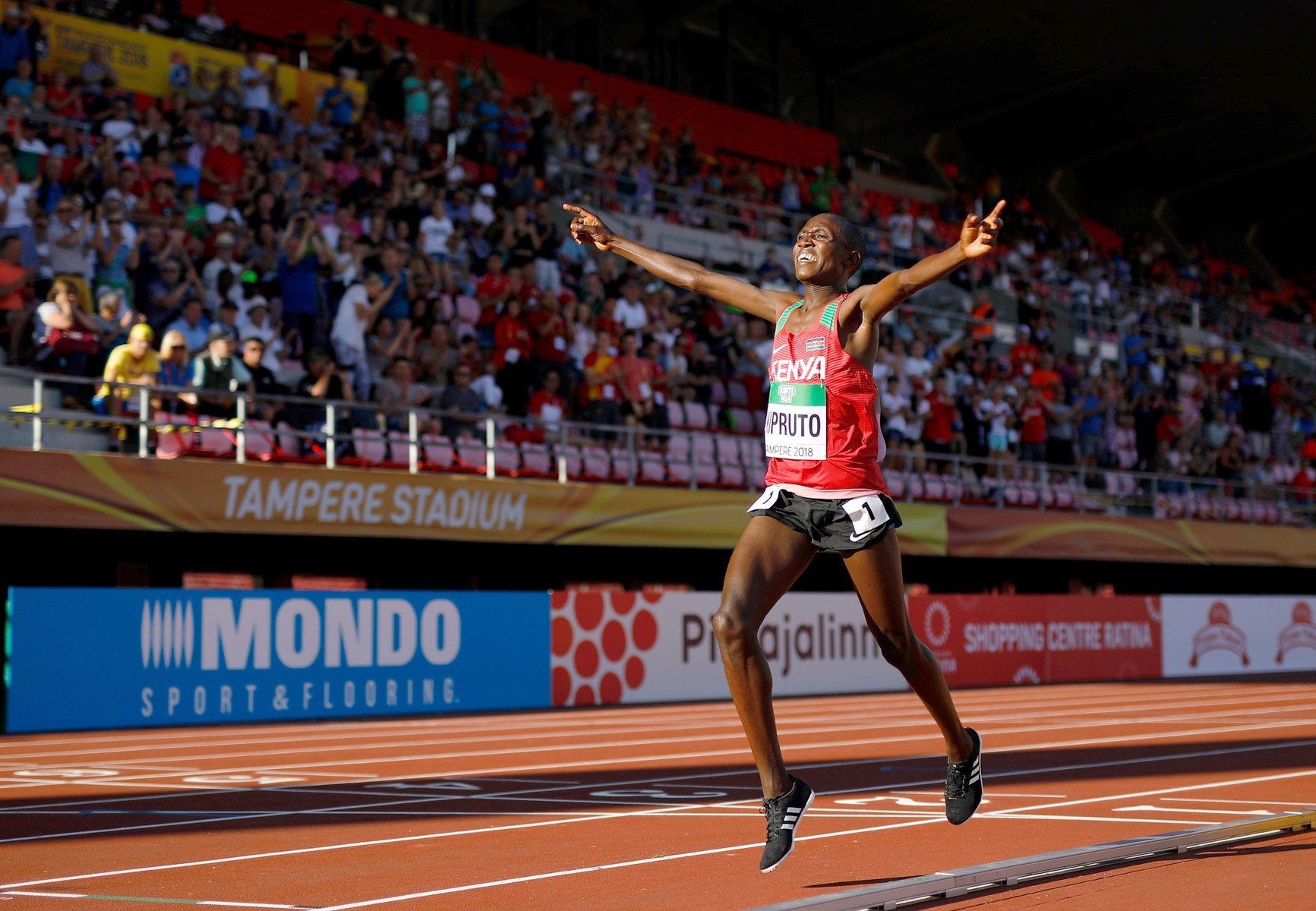 Rhonex Kipruto wins the men’s 10,000m at the IAAF World U20 Championships Tampere 2018 (Getty Images for the IAAF)

The rest was an exhibition by Kipruto which he capped with a thumbs up to the crowd as he sped down the homestretch one last time.

With Boit fading over the final few laps, Ethiopian Berihu Aregawi, who was shadowing the Kenyan for much of the second half, sped by over final lap to take bronze in 27:48.41, a personal best. Boit was next in 27:57.44, also a lifetime best.

“My performance was really good today and I am really happy being second,” said the 17-year-old who was the youngest athletics Olympian in Rio two years ago.

Chebet was simply brilliant on the last lap, kicking past long-time leader Ejegayehu Taye of Ethiopia off the final bend, holding a slight edge all the way to the finish.

Both runners celebrated as they crossed the line, with the winner clocking 15:30.77 to Taye’s 15:30.87 following an enthralling finish with another Ethiopian, Girmawit Gebrhizair taking bronze in 15:34.01.

“Second feels bad,” said Taye. “I wanted first. The time was good and the team tactics were good. They worked but we still wanted the gold medal.”

Also making her European debut, Gebregziabher had to settle for bronze in 15:34.01. 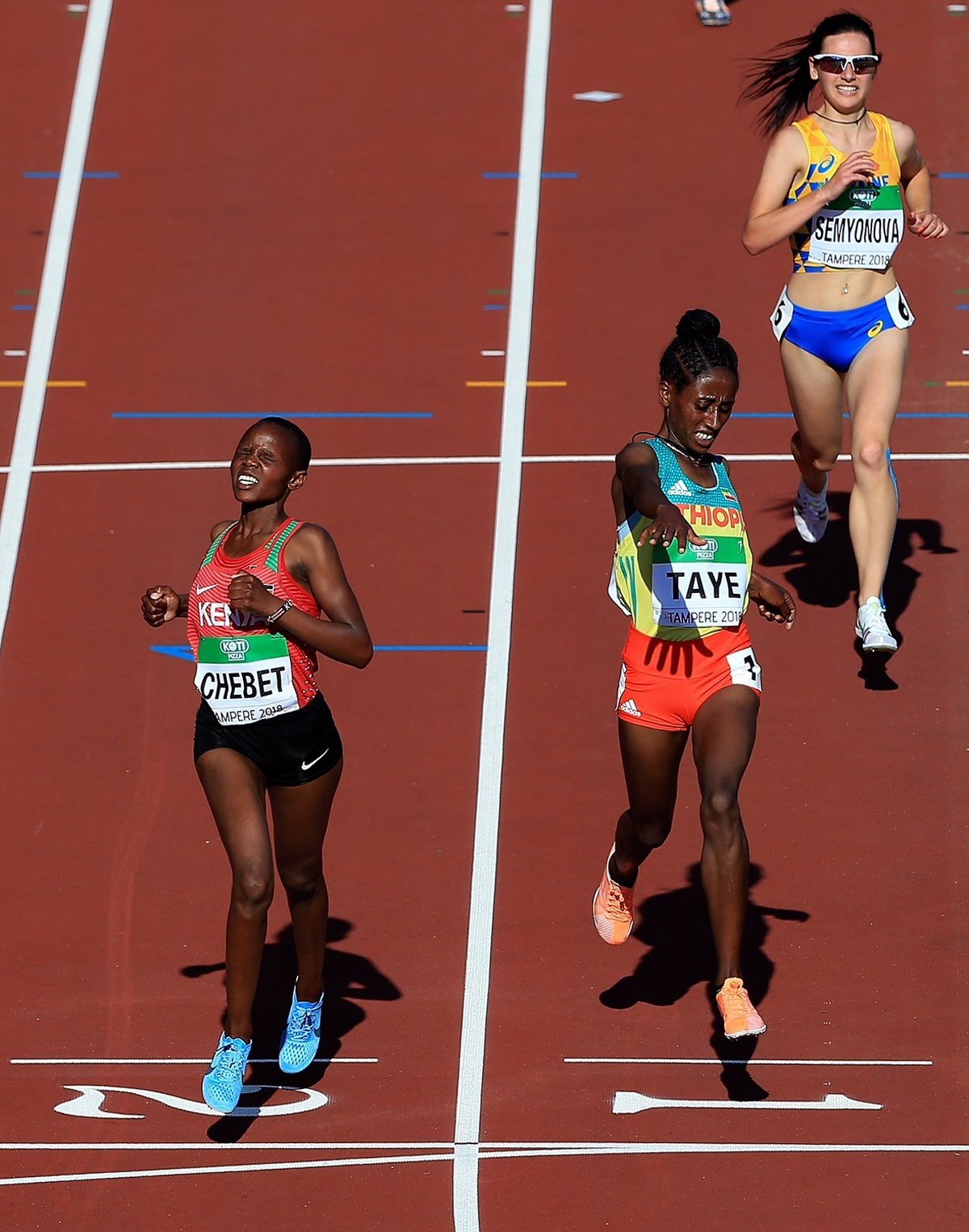 Lobun led the entry lists by a clear margin before the start with her 15:12.89 lifetime best but she was decisively beaten at the Kenyan U20 Championships in Kasarani by Beatrice Chebet by 15:31.66 to 15:46.97.

From the gun, the early leader, as you often find in a major championship distance final, is Japanese in this case, Tomomi Takamatsu, who towed the field through 1000m in 3:07.71.

Lobun then crashed to the track in the first major incident of the women 12 and a half-lap final, losing several metres after colliding legs with her rivals. However, she thankfully got back up and re-filled her lungs with air and nestled in the pack.

As the race came towards its conclusion, two Kenyans, two Ethiopians and one Ugandan were out at the lead in the race for the medals: Ejegayehu, Lobun, Gebrhizair, Chebet and Sarah Chelangat.

After the bell, Ejegayehu was still holding the advantage with Lobun breathing down her shoulder as they powered through the back straight with the pace picking up to full throttle.

It was then that Chebet, made her decisive move at the final sprint for the finish, finding the legs to out-kick her Ethiopian rival and deliver the world title.