IAAF marks ‘one year to go’ to Beijing 2015 with clock, mascot unveil – AthleticsAfrica 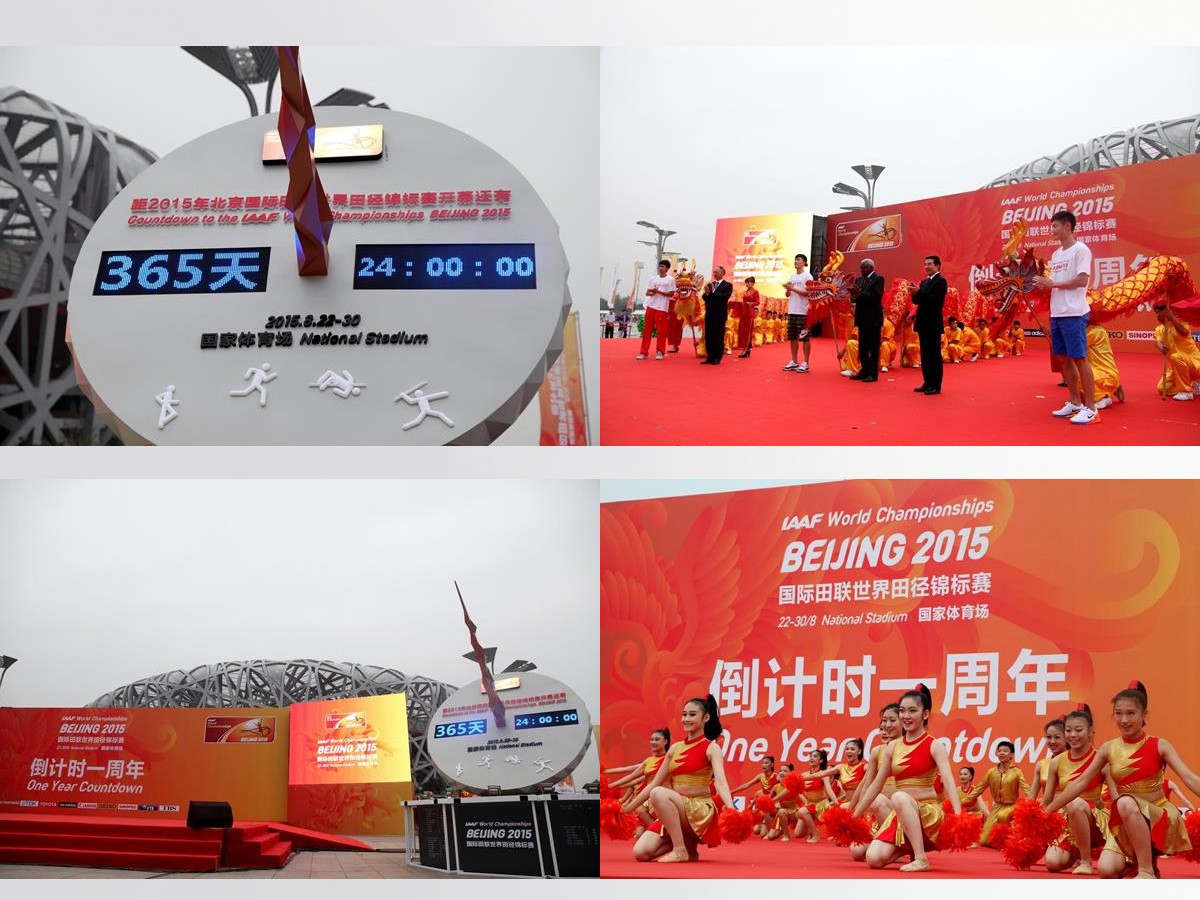 The IAAF President, Lamine Diack, today launched the first major milestone in the promotion campaign for the 15th IAAF World Championship, Beijing 2015 by attending the ‘One Year Countdown Ceremony’ in Beijing, China.

[link id=”186″ tax=”post_tag” text=”Lamine Diack”] was joined by Wang Anshun, Mayor of the Beijing Municipal Government and Liu Peng, China’s Minister of Sport Administration Bureau and President of the Chinese Olympic Committee, along with other distinguished national and city officials representing the member federation and local organising committee.

The IAAF delegation at the ceremony also included General Secretary Essar Gabriel. In exactly one year the IAAF World Championships, Beijing 2015 will commence in the iconic Bird’s Nest National Stadium.

Speaking at the ‘One-year-to-go’ ceremony, President Diack said: “Today marks exactly one year to go to the start of the Championships, which take place from 22 to 30 August 2015.

“In recent months our Coordination Commission and Technical Delegates have made site visits to Beijing to assist and access the planning process.

“Most recently a progress report was delivered by the Local Organising Committee to the IAAF Council which was meeting in Eugene, USA, ahead of the IAAF World Junior Championships.

“Today, we are here to witness the unveiling of a large Countdown Clock. The location for the clock next to the National Stadium, better known as the ‘Bird’s Nest’ could not be more appropriate.

“The IAAF World Championships, Beijing 2015 will be hosted in this stadium, which was the venue for the 2008 Olympic Games and which is the setting for the annual IAAF World Challenge meeting.

“We remember so well the marvellous Olympic Games in Beijing which saw the crowning of one of the greatest sports stars of the modern age.

“Usain Bolt’s three Olympic titles, in the individual 100m and 200m and as the anchor of the Jamaican 4 x100m relay team, were all set in spectacular world record times that astounded the world.

“The ‘Bird’s Nest’ and ‘Lightning Bolt’ will forever be associated together.

“Next year Bolt, along with other super stars of athletics such as [link id=”198″ tax=”post_tag” text=”David Rudisha”], Sally-Ann Fraser-Pryce, Kirani James, Sally Pearson, Renaud Lavillenie, Valerie Adams, Mo Farah to name but a few will compete again in Beijing.

The Chinese capital will witness great sport entertainment as the Bird’s Nest again embraces the Olympics’ number one sport.

A giant countdown clock was unveiled outside the National Stadium, better known as the world famous ‘Bird’s Nest’ which hosted the 2008 Olympic Games. The stadium will be the venue for the nine-day championships from August 22 to 30, 2015.

Introduced at the public ceremony were the official Championships poster and the mascot.