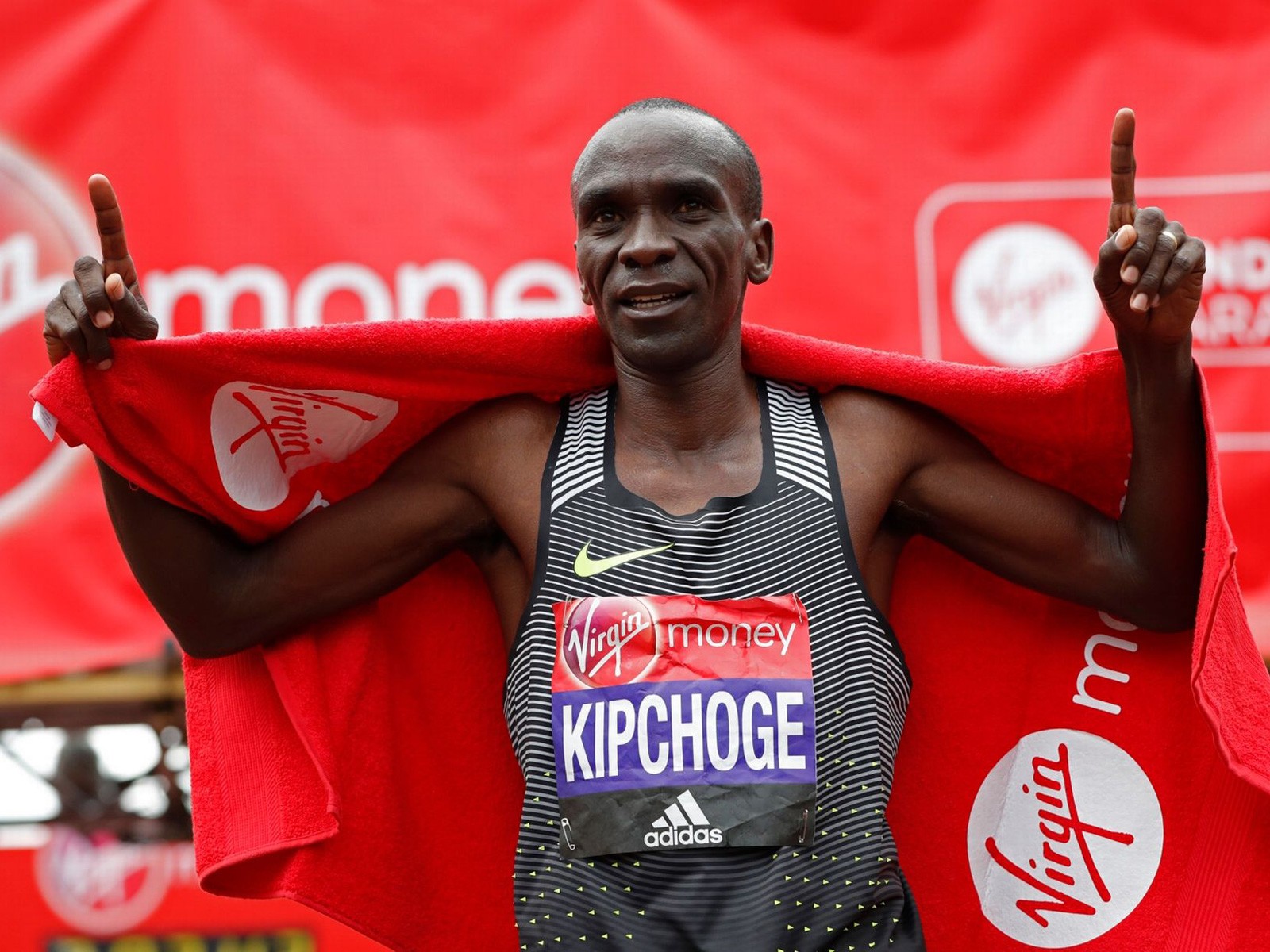 Among perhaps the best men’s field ever assembled for a marathon, a line-up which featured an array of champions and record holders including the likes of Wilson Kipsang, Stanley Biwott, Dennis Kimetto, Kenenisa Bekele and Ghirmay Ghebreslassie, Kipchoge was in complete control and delivered a masterclass in marathon running as he broke the London course record.

In crossing the Finish Line on The Mall in 2:03:05, Kipchoge ran the second fastest marathon of all time, finishing just eight seconds shy of Dennis Kimetto’s world record and inside Wilson Kipsang’s course record of 2:04:29 by more than a minute.

Kipchoge dismissed the suggestion that better conditions may have been more conducive to a faster time. “Conditions were cold and windy but I’m happy with the outcome,” said the 31-year-old champion. “I don’t complain because all the athletes were faced with the same conditions. The wind was there but what can we do?”

Delighted with his new course record yesterday, Kipchoge said immediately after the race that he had no regrets, despite coming so close to breaking the all-time marathon record. After the dust had settled overnight, his opinion had not changed.

“I don’t have any regrets. In sport, regret is a sign of indiscipline. I believe in myself and confidence comes from good training and the fitness of my body.”

Flashing his winning smile, Kipchoge added: “London 2016 is now in the past; I’m looking forward, [Olympic gold at Rio 2016] that’s my priority.”

Having tasted success twice on the Olympic stage with bronze in 2004 and silver four years later in Beijing, Kipchoge is hoping to compete in what would be his first marathon on the Olympic stage. Boasting superb form with six wins out of seven marathons since 2013, he’s clearly the man to beat.

With just over three months until the action gets underway in Rio, Kipchoge revealed that he hopes to be hearing from the Kenyan selectors in a month’s time.

Back to back surprise winners

Sumgong’s victory made it back-to-back surprise winners at the London Marathon, after Ethiopia’s Tigist Tufa shocked the spectators to win last year’s race.

Sumgong, running the London course for only the second time, was delighted that the biggest win of her career made it a Kenyan double.

Now the proud owner of Kenya’s eighth female title in London, Sumgong’s victory was hard fought and brave after a dramatic fall close to 22 miles.

Recovering from banging her head on the Tarmac, the 31-year-old recovered and pushed on, crossing the line in 2:22:58, just five seconds ahead of 2015 champion Tufa.

Sporting a small dressing on the wound on her temple, Sumgong said: “I’m okay. There was a lot of pain for 500m, then it disappeared. I got strength when I fell down; I knew that getting up was the challenge.

“When you are in a race, you face challenges; that shows that you can be successful. When I fell down, the thought came to my mind that I will be successful today and go ahead.”

Now a marked lady in the women’s field, Sumgong admitted: “I like keeping a low profile because there’s no pressure.”

Both Sumgong and Kipchoge revealed that they now look forward to some downtime with their families back home in Kenya before turning their attention once more to training, and returning to the training camps that have played such a major part in their successes.

Reflecting on the reaction back home in Kenya on their victories, Kipchoge smiled and said: “Probably half of the country was watching the London Marathon – that’s 20 million people. “I had about 200 messages on WhatsApp, hundreds on Facebook and a lot of Tweets.”

If their respective social media message count had been a race, Sumgong would have been the winner, as she revealed: “For WhatsApp there were 882 messages and many texts.

People really appreciated us from all over the world. I have a five-year-old daughter and she was watching on TV and kneeling down to pray for mummy.”

The champions paid tribute to the amazing crowds that once again lined the route for yesterday’s London Marathon. “It’s my favourite race because of the crowds, cheering and giving us great support,” said Sumgong.

Kipchoge concurred, adding: “You do hear people shouting your name. The only time I missed them was in the Blackfriars tunnel. I think that they are the best crowds in the world.”