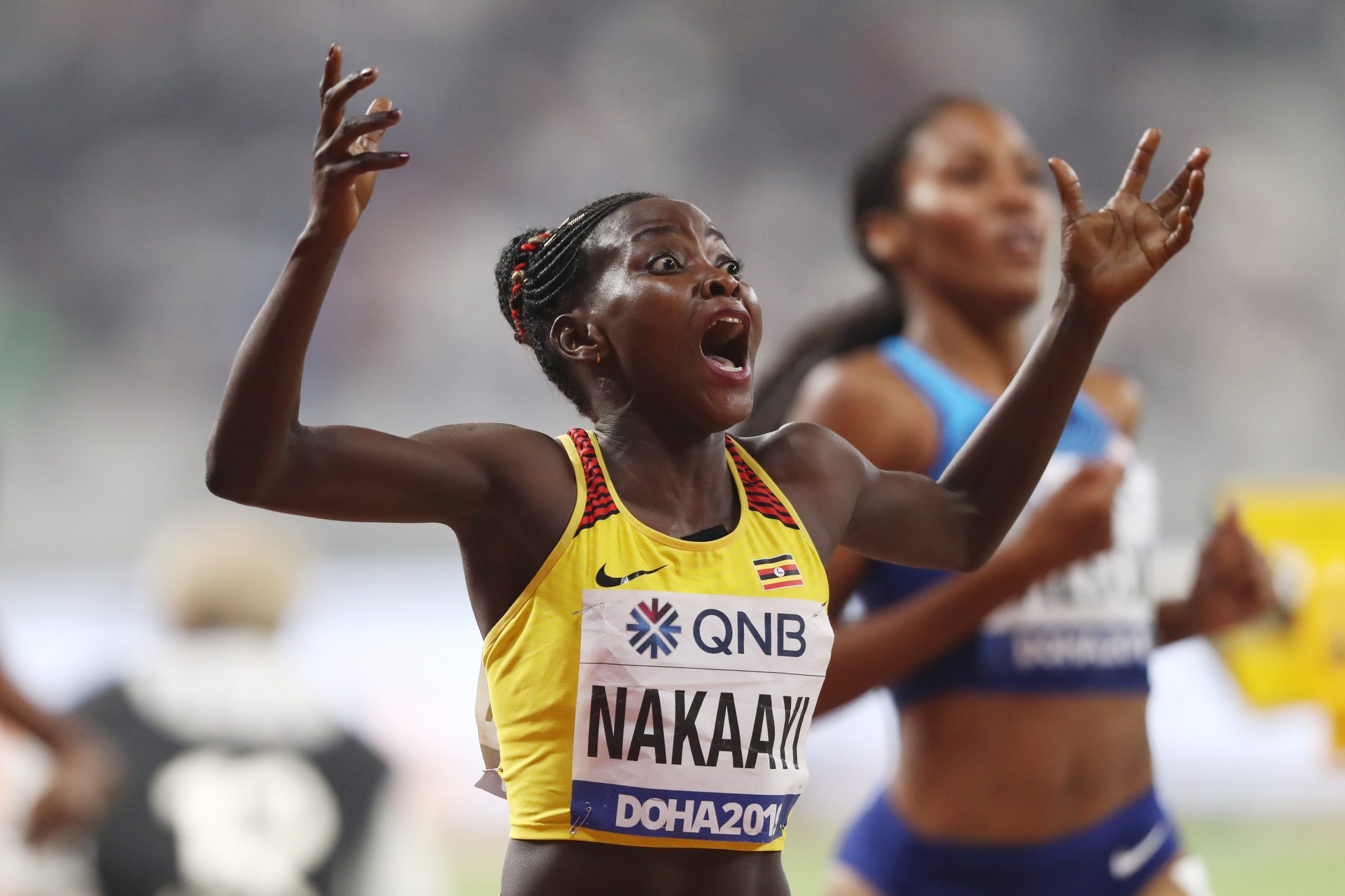 On a giddy evening of outstanding distance races there were rapturous scenes by the the back straight as a mass of flag-waving Ethiopians who had roared their way through the men’s 5000m final acclaimed a gold and silver medallist after Muktar Edris had successfully defended his title by outsprinting his young rival Selemon Barega.

The future is coming in the shape of 19-year-old Barega and fellow teenager Jakob Ingebrigtsen of Norway, who made a bold bid for victory with 300 metres to go, but was over-run in the last 100 metres and finished an exhausted fifth. But Edris (12:58.85) has held it back for now. 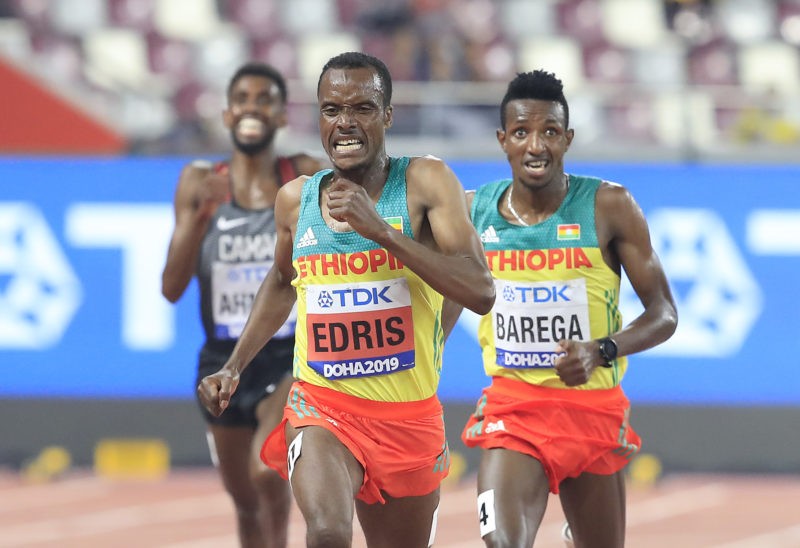 For unbridled joy on the track tonight, there was no rival for Ugandan runner Halimah Nakaayi, after she upset the favourite, USA’s Ajee Wilson, to win the 800m title in a national record of 1:58.04.

She unleashed an irresistible kick in the home straight, surging past early pace-setter Wilson, and then launched into an entirely uninhibited celebration, dancing her way around the track.

Her reaction was only matched by that of the small Ugandan contingent in the grandstand, who had watched her become only the second woman from her country to win a world athletics title. 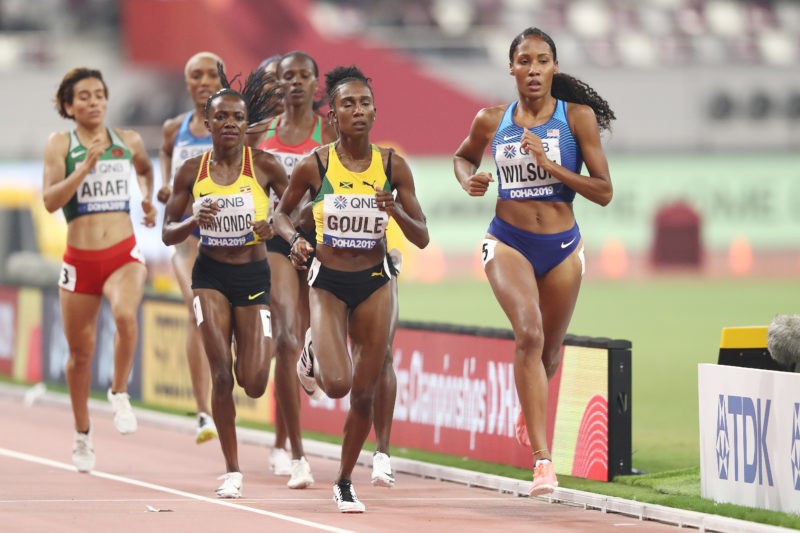 Chepkoech banished her disappointment from the last World Championships in London, where she mistakenly ran off the course and missed the water jump while leading on the first lap and had to double back, and then fell on the second lap, before eventually finishing fourth.

There were no hitches this time as she won in a championship record of 8:57.84, having led by 50 metres at the bell. 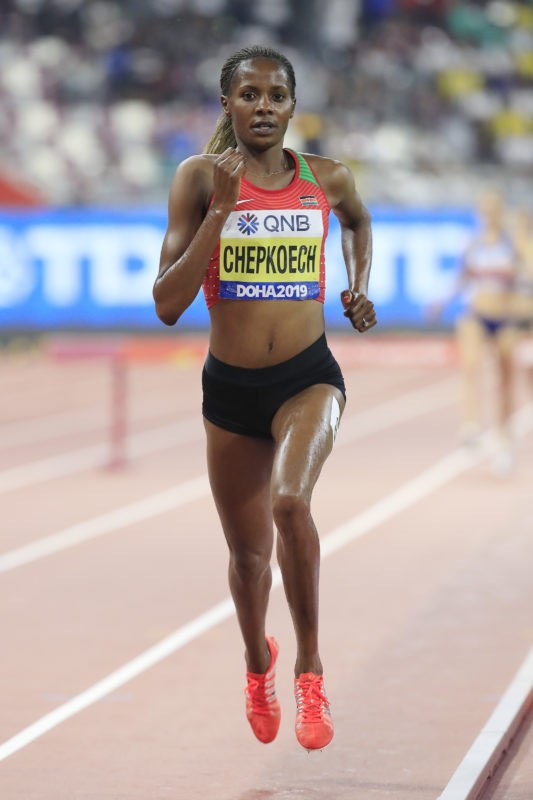 Three of the four fastest men in the history of the 400m hurdles lined up in one of the most anticipated races of the IAAF World Athletics Championships in Doha last night, and it was the Viking heart of Karsten Warholm that prevailed as the Norwegian retained his title.

Last year it appeared that Warholm’s reign in the quarter-hurdles was over, as he was over-taken by Qatar’s rising force Abderrahman Samba and USA’s Rai Benjamin on the track and on the clock.

But he fought back this year to re-establish his supremacy, leading throughout tonight’s final to cross the finish line in 47.42, ahead of Benjamin (47.66).

Samba, whose momentum was stalled by injury earlier this year, surged home to take the bronze (48.03) and earn host nation Qatar’s first medal of the championships.

The champion had given notice of his intent earlier in the month by winning the IAAF Diamond League title in 46.92, the fastest time ever run behind the 27-year-old world record of 46.78, held by USA’s Kevin Young.

“It is easy to say afterwards that this was going to happen but I wasn’t too sure, to be honest,” Warholm said.

“This was a very hard race. I had a pain in my chest. I thought I was going to die but here I am a world champion.”

African Games champion Abdelmalik Lahoulou of Algeria faded after the 300m mark and finished in eighth position in 49.46 secs.