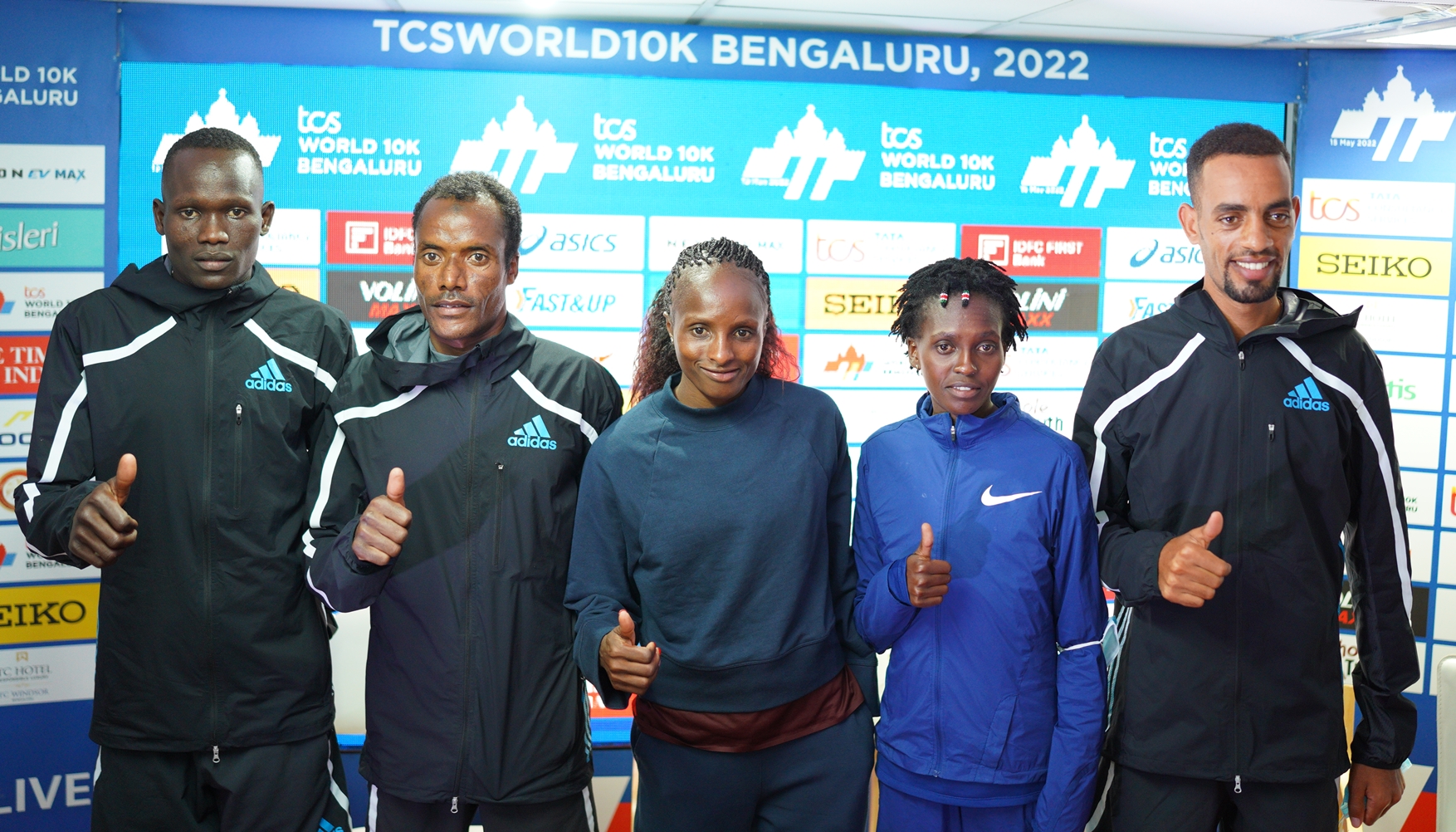 Five of the world leading distance runners gathered ahead of Tata Consultancy Services (TCS) World 10K Bengaluru 2022 on Sunday 15 May for the traditional pre-race press conference on Friday.

The two most important questions for all the runners were simple ones: “How fast do you think you will run on Sunday?” “and “What are your plans for the World Athletics Championships in Eugene this summer?”

“I feel confident I can run well on Sunday,” commented Ethiopia’s Andamlak Belihu, the defending TCS World 10K men’s champion from 2019, the last time the event was held in a physical form

“I made my marathon debut in Valencia in December, but it didn’t go well, and I had some injuries. I haven’t raced since then, but I have now recovered well, has good training, and I didn’t want to miss this race.

“I feel like India is my second home, this is my sixth trip here. The Indian people now know me, and I can hear them cheering me and calling my name from the roadside,” added Belihu, who was a late addition to the race and but who has also won the Airtel Delhi Half Marathon twice.

“I have been to the World Championships and raced 10,000m on the last two occasions but didn’t get a medal so obviously I want to improve there and fight for a place on the podium [in Eugene],” said Belihu.

By contrast, his compatriot Muktar Edris came away from the last two World Championships in 2017 and 2019 with 5000m gold medals in his hand on both occasions.

“And I want to make it a third, of course,” said Edris. “After this race I will focus on the World Championships and start racing on the track.”

Edris’ achievements on the roads have been more modest than his track exploits but he feels that the TCS World 10K this Sunday, the 14th edition of the famous race, which was inaugurated in 2008, could be a great opportunity to make a big breakthrough.

“My previous races over 10km on the road have been tough courses, often in Italy, where it has been difficult to run fast times. However, this looks like a fast course where I can run a personal best,” said Edris.

Kenya’s former world half marathon record holder Kibiwott Kandie, the fastest man in the field, is clearly on form as he moved up to fourth on the world all-time list following his recent victory in the stunning time of 26:50 in the German city of Herzogenaurach just two week ago.

He will start Sunday’s race possibly as the favourite and Kandie is looking to make significant inroads into his compatriot Geoffrey Kamworor’s course record of 27:44 that dates from in 2014

“I am hoping for a very quick race, and I can see this is a very fast course. As for the summer, I hope to make the Kenyan team going to the World Championships in the 10,000m, that’ll soon be my big focus. But if I don’t make the team then I start training for the roads again and race some half marathons in the autumn,” said Kandie.

Kenya’s Hellen Obiri and Irene Cheptai were equally positive about the possibilities of improving on the women’s course record of 31:19 set by their friend and fellow Kenyan Agnes Tirop in 2018.

“The other ladies, particularly the Ethiopians, are very strong. But I am also very strong, I have trained very well and I’m looking forward to this race, which will be last one on the roads before I turn my attention to the track,” said Obiri who, like Edris, has won the last two World Athletics Championships 5000m titles.

Cheptai was the 2017 champion at the TCS World 10K. “And I feel very positive about victory again. I have looked at the field and I have been thinking about how I can beat these ladies. I think I can win again,” commented Cheptai, who was in great form in 2021 and finished sixth in the Olympic Games 10,000m last summer.

In addition to the TCS World 10K for elite runners, there is an Open 10K, the Majja Run (5km) the Senior Citizens’ Race and the Champions with Disability Race (both 4.2km).

The Open 10K and the Majja Run also have virtual runs. Full details of all the races are on the event website.