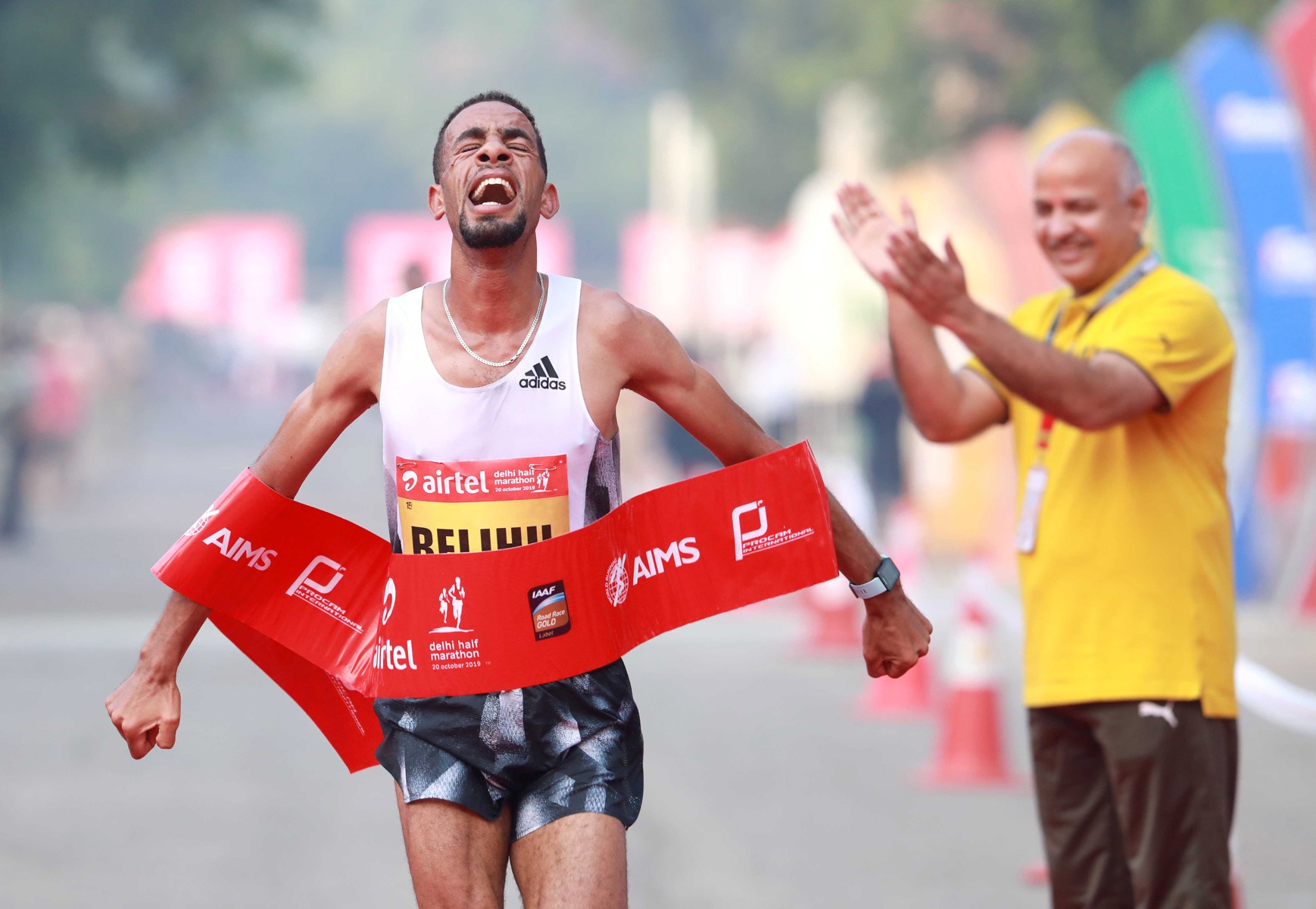 Ethiopia’s Tsehay Gemechu retained her Airtel Delhi Half Marathon title but added lustre to her triumph by smashing the course record she had set 12 months ago in the Indian capital when she ran 66:00 on Sunday.

The women’s race came down to a thrilling head-to-head duel over the final five kilometres between the defending champion and her compatriot Yelamzerf Yehualaw.

A large pack went through 5km in 15:43 before a sharp increase in pace by the male pacemakers brought the leading group of six past 10km in 31:22, indicating that the course record was very much under threat.

One-by-one runners became detached until only Gemechu and Yehualaw remained as they went through 15km in 47:05.

Coming into the final kilometre, Yehualaw – who won the African Games half marathon title in August – edged in front and briefly looked like she was going to cause an upset but with the finish line approaching Gemechu dug deep and managed to claw her way past her rival to also notch up a personal best while becoming just the second woman to defend in Delhi.

“I was tired after Doha (where she finished fourth in the world championships 5000m two weeks ago) but I wanted to come here and fight for the course record. I knew I was mentally strong,” reflected Gemechu.

Yehualaw, even younger than the winner having just turned 20 in August, took more than three minutes off her previous best for the distance when finishing just one second behind Gemechu in 66:01.

Zeineba Yimer, who started to lose contact with the leading pair just before 15km, held on to make it an Ethiopian 1-2-3 when she crossed the line in third place in 66:57, the same position as she had finished in 2018.

Kenya’s 2017 world cross country champion Irene Cheptai may not have made the podium but had a satisfactory half marathon debut when she came home fourth in 67:39.

Among the thousands of spectators situated close by the finish line in the Jawaharlal Nehru Stadium, watching Gemechu run the fastest ever women’s half marathon in India, was the men’s winner Andamlak Belihu who also retained his title.

Belihu, also from Ethiopia, had finished just under seven minutes earlier after improving his personal best by eight seconds from his winning time of 12 months ago, stopping the clock on this occasion at 59:10.

However, in sharp contrast to Gemechu, he had the frustration of once again just missing out on beating the men’s course record of 59:06, held since 2014 by yet another Ethiopian Guye Adola. 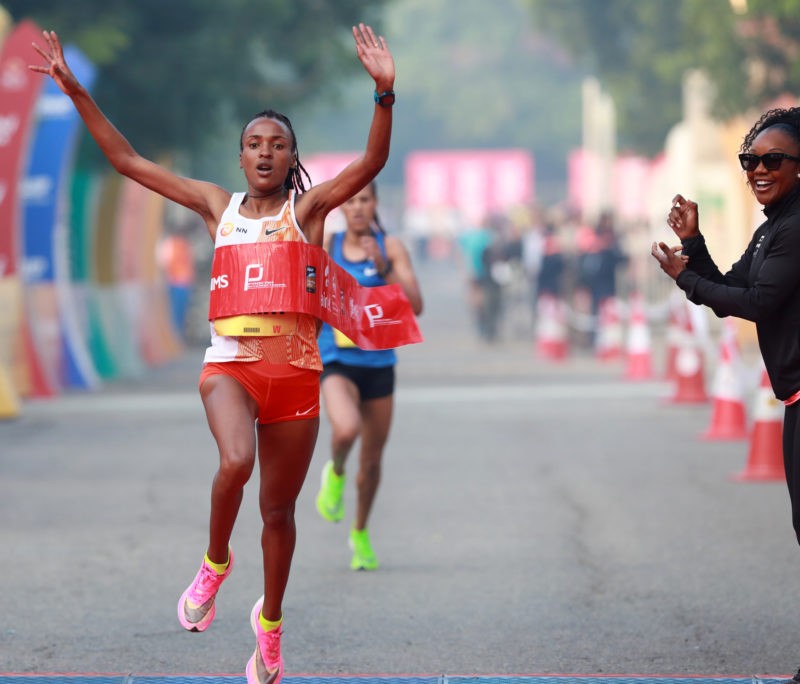 In similar fashion to the women’s race, the men’s contest also saw a thrilling head-to-head battle over the final few kilometres.

Six men passed 10km in 28:08. Belihu was still accompanied by another Ethiopian, Solomon Berihu, and the Kenyan pair of Kibiwott Kandie – who had made much of the pace in the middle stages of the race – and Alfred Barkach as this East African quartet reached 15km in 42:11 but between 17 and 18 kilometres firstly Barkach and then Kandie couldn’t stay with the relentless momentum and surges of the two Ethiopians and drifted backwards.

At 18km, Berihu pushed again and Belihu looked in trouble for several minutes but recovered his poise and reeled in his rival with little more than a kilometre remaining before pulling away for victory.

“At about 18km I started to suffer some back pain, that possibly cost me the course record. I’m a bit disappointed that I missed out on the course record again but I got a personal best so I cannot complain too much,” commented Belihu, who immediately declared his long-term intention to come back to Delhi in 2020 with the aim of attacking the course record again and trying to become the first man or woman to win a hattrick of ADHM title.

“I have been mainly focusing on the track season in my training until recently but I always knew I was going to come here and so I had that in mind. I am always very pleased to come to Indian races and especially Delhi as it was here that I had my first successes, and this changed my life.

“This race has put the frustration of finishing fifth at the world championships (in the 10,000m in Doha two weeks ago) behind me,” he added.

Berihu, just 20, posted one of the fastest half marathon debuts ever when he came home second in 59:17 while Kandie hung on for third in 59:33.

Top Results for the Airtel Delhi Half Marathon 2019 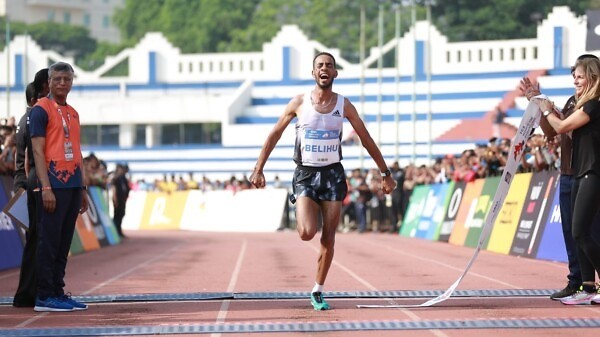 Ethiopia’s Andamlak Belihu Berta beats a world-class field to win the men's race, in 27:56, at the TCS World 10K Bengaluru 2019 on Sunday...