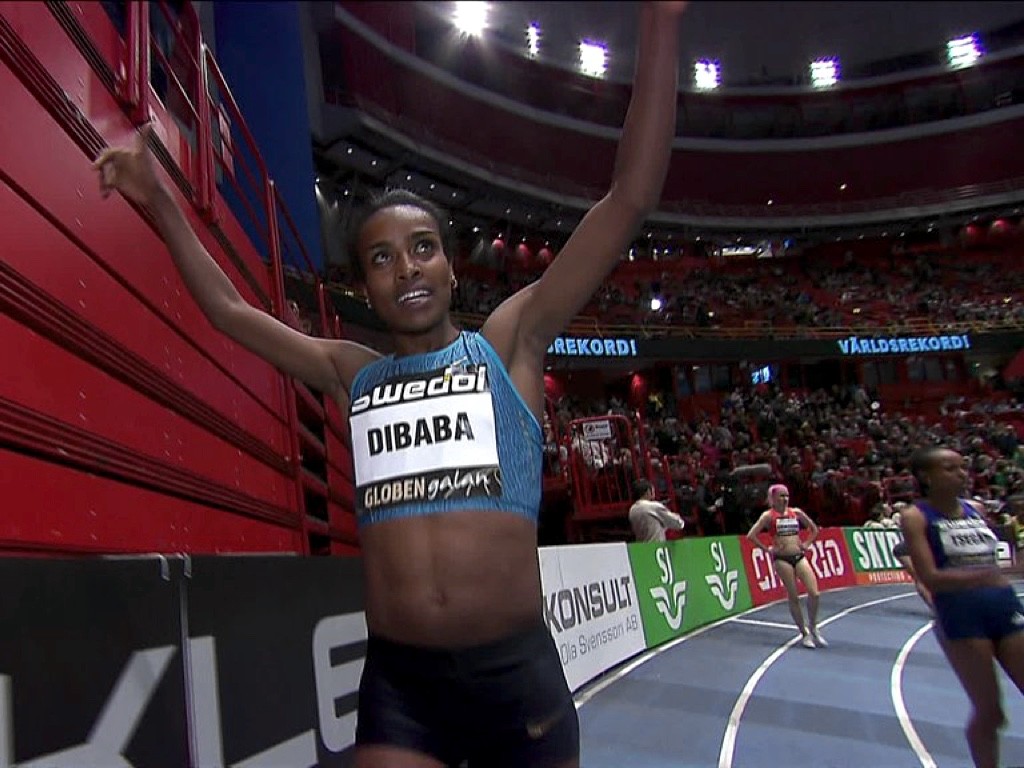 Genzebe Dibaba of Ethiopia after breaking the world indoor records in Stockholm on Wednesday February 17, 2016.

[link id=”82″ tax=”category” text=”Ethiopia”]’s Genzebe Dibaba broke the world indoor mile record at the Globen Galan with a clocking of 4:13.31, one of two world indoor records set during the 2016 IAAF World Indoor Tour meeting in Stockholm on Wednesday February 17.

Paced through the first few laps at the Ericsson Globe Arena by world 800m leader Joanna Jozwik, Genzebe Dibaba was alone in front from 800m onwards.

She passed 1000m in about 2:37.5, which was slightly adrift of the pre-race desired pace, but well on course to break the world indoor record of 4:17.14 set 26 years ago by Romania’s Doina Melinte.

World junior champion Gudad Tsegay was a distant second in 4:24.98, the third-fastest time ever by a junior. World indoor silver medallist Axumawit Embaye made it a 1-2-3 for Ethiopia, finishing third in 4:27.75.

Dibaba’s performance is the second-fastest ever under any conditions, just 0.75 shy of the outdoor world record.

“The pacing was perfect for me,” said Dibaba. “I know this track well, and it is very good for me. The only thing that was difficult was the conditions in the arena – it felt very cold.”

“I am very happy with this record. And I think I will be able to run even faster this season,” she added.

His winning mark bettered the previous record of 2:14.96 set by Denmark’s Wilson Kipketer in 2000.