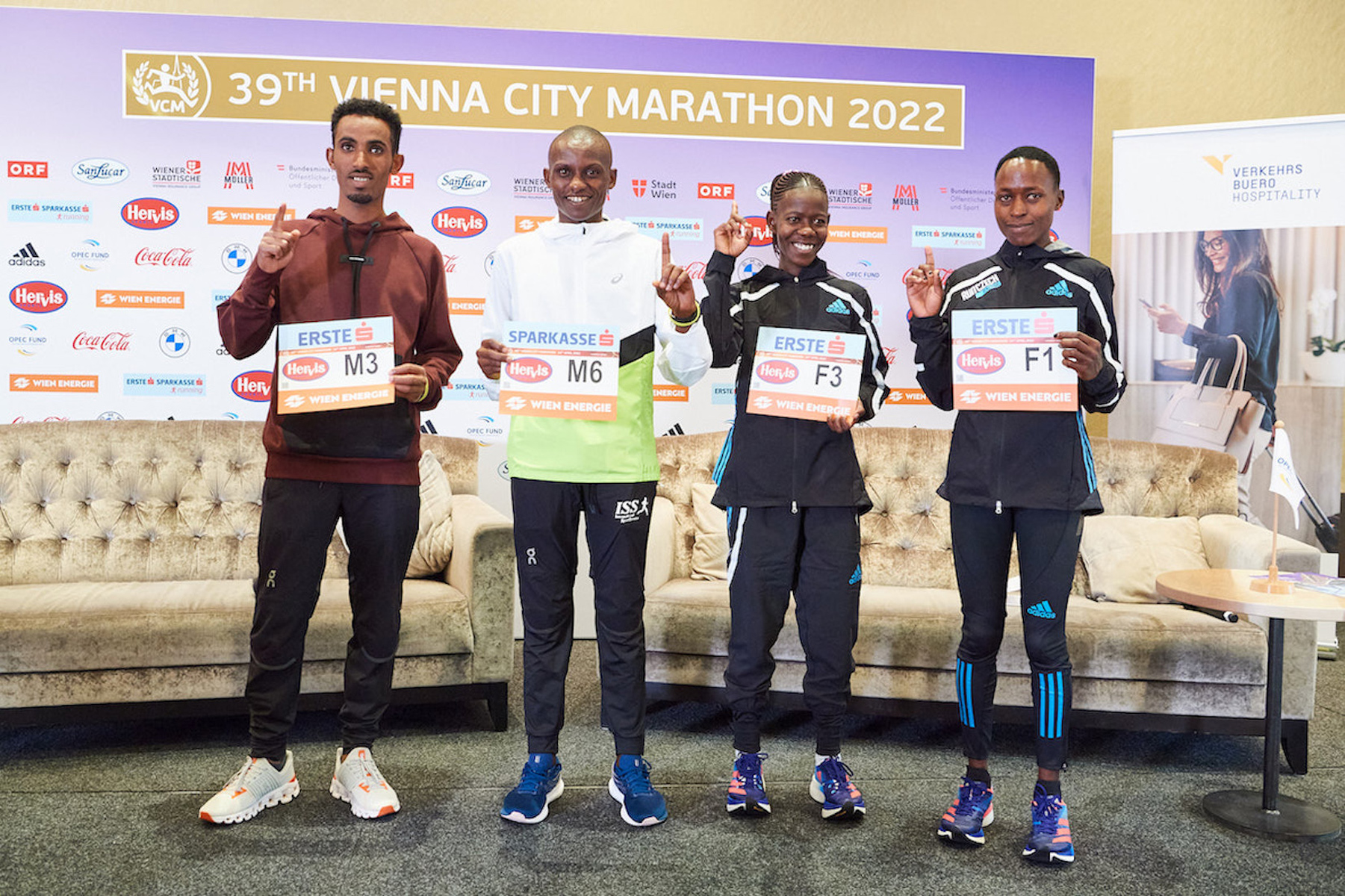 Defending champion Vibian Chepkirui hopes to make another big step at the Vienna City Marathon, aiming to win her second race at the classic distance as well.

The Kenyan believes she is ready to run a time of around 2:20 on Sunday. Such a result would not only smash her PB but the course record of 2:22:12 as well.

It was in September when Vibian Chepkirui won her debut marathon in Vienna with 2:24:19 in very warm weather conditions.

While five women feature personal bests of sub 2:25 there are two men on the start list who have run below 2:06. Oqbe Kibrom of Eritrea is the fastest runner in the field with a PB of 2:05:53.

Organisers of the 39th edition of the Vienna City Marathon have registered more than 31,000 entries including events at shorter distances. Around 8,000 of them are marathon runners.

“I have very good memories of Vienna and I am happy to be back. It is a good course and the people are fantastic,” said Chepkirui, with her manager Julien di Maria of Ikaika helping her to answer the questions during the press conference.

“I have prepared well and because of my training I think that in good weather conditions a time of around 2:20 is possible for me.“

As Julien di Maria explained Vibian Chepkirui became more confident when she saw the result of her training partner Joan Melly last Sunday: She won the Seoul Marathon with a course record of 2:18:04.

“Vibian and Joan always train together in Iten. And they are more or less on the same level. It was only during the final stages of some sessions when Joan was a little stronger than Vibian,“ explained Julien di Maria.

Vibian Chepkirui has only run a single international race since her Vienna triumph in September and has fully focussed on defending her title in the Austrian capital.

The 27 year-old was fifth in Spain’s Santa Pola half marathon in January with 69:35. On Sunday she will again be paced by her husband Wesley Kangogo, who also acts as a pacemaker for the group when they are training in Iten.

There are four women with faster personal bests than the defending champion on the start list of the Vienna City Marathon. One of them is Ruth Chebitok, who has run 2:23:29 in Toronto in 2018.

“I had injury problems for some time, but then ran quite well in Berlin last year with 2:28:18. Now I am well prepared and confident that I can run a time around my PB again,“ said the Kenyan.

The Vienna City Marathon is among a number of top road races that experienced an unusually high number of late cancellations.

Goitom Kifle of Eritrea had to cancel his start because of an injury. He had been the fastest runner on the start list with a PB of 2:05:28. Another one who can not compete in Vienna is the defending champion Leonard Langat of Kenya.

There could still be a winner from Eritrea, which would be a novelty in the history of the race. Oqbe Kibrom is now the fastest runner on the start list with a PB of 2:05:53.

The Eritrean, who held the national record for some time with his PB from 2020, looks ahead with confidence. “I have trained well and hope to run a personal best on Sunday,“ said Kibrom.

The pace of the leading group will likely be perfect for him as it is planned to pass through half way in around 63:00.

An attack on the course record would then still be possible. Ethiopia’s Getu Feleke holds this mark with 2:05:41 from 2014.

Cosmas Muteti might not be a pre-race favourite, but the Kenyan has developed very well recently.

Coached by former world record holder Patrick Makau he improved to 2:08:45 in Berlin last year, where he took a fine fifth place in warm conditions.

“Patrick is a good coach and I have improved under his guidance,“ said Cosmas Muteti, who targets his personal best on Sunday.

There is also an OPEC Fund Rookie Team competing in Vienna on Sunday.

The idea is to give unknown African athletes a chance to compete internationally in Vienna and to support them to hopefully build a successful career.

“This will be my first marathon outside Kenya and I am grateful for the opportunity. I hope to improve to 2:10 on Sunday,“ said Serem.