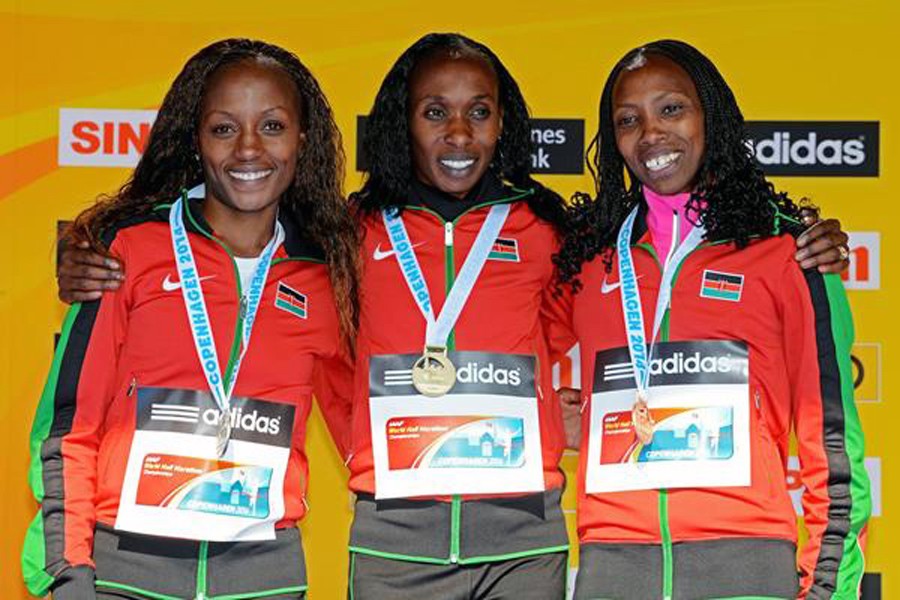 Kenya’s Geoffrey Kipsang Kamworor and Gladys Cherono led home their compatriots to a men’s and women’s race victories at the 2014 IAAF/AL-Bank World Half Marathon Championships in Copenhagen on Saturday.

Geoffrey Kipsang Kamworor, the Unknown Runner, caused an upset in the men’s race on Copenhagen’s flat and fast course clocking 59:08, the world’s fastest time this year, to nick the gold medal ahead of Eritrean Samuel Tsegay, who took the silver in a personal best of 59:20 and Ethiopia’s Guye Adola, who took bronse in 59:21.

“I was mentally prepared, so I had no problem. I wanted to win gold – this was my main goal,” said Geoffrey Kipsang after the race.

“I was the fastest runner at the half marathon last year so I expected to win. But I knew it was going to be tough. I knew Tadese and the Eritrean team were strong, and the Ethiopians.

“I was prepared to win from the 10km mark. I was feeling strong and I decided to go. What really assisted me were the people along the course. They were cheering, and I was getting a lot of strength from that, feeling that I could win,” he added.

Kenyan Wilson Kiprop, who was returning to the World Half Marathon Championships for the first time since winning the individual title in 2010, finished in sixth place, clocking 1:00:01.

However, in a twist of fate, Tadese finally got his hands on a team gold medal after earning six consecutive silvers in past championships. Serial team gold winners, Kenya had to settle for silver this time around with Ethiopia getting the team bronze.

In the women’s race, Kenya produced a totally dominant performance to reclaim the individual and team honours from their Ethiopian rivals whilst also achieving the historic feat of filling all top five spots; a first at the World Half Marathon Championships.

“We came from number one to number five, and that was amazing. We did not want to leave anybody behind.”

“I wasn’t expecting to win. We ran as a team and we were told to talk to each other all the way,” said the 30-year-old Cherono.

“We came from number one to number five, and that was amazing. We did not want to leave anybody behind.”

“When we got to 18 kilometres I saw that everybody was no longer having enough energy so I decided to push on and go ahead. I felt that I was still strong, so I decided to go,” she added.

Cherono, who also won the 5000m and 10,000m at the 2012 African Athletics Championships in Porto-Novo, Benin said her next task will be to prepare for the 10,000m at the 2014 Commonwealth Games in Glasgow, Scotland in the summer.

Pre-race favourite Lucy Wangui Kabuu had to settle for fourth as she clocked 1:08:37 ahead of Mercy Jerotich Kibarus (1:08:42) who completed the Kenyan sweep in fifth position.

Ethiopian Netsanet Gudeta finished sixth in a personal best of 1:08:46 to secure the team silver for Ethiopia with the team bronze going to Japan.