Dennis Kimetto confident of decade-long stay at the top – AthleticsAfrica 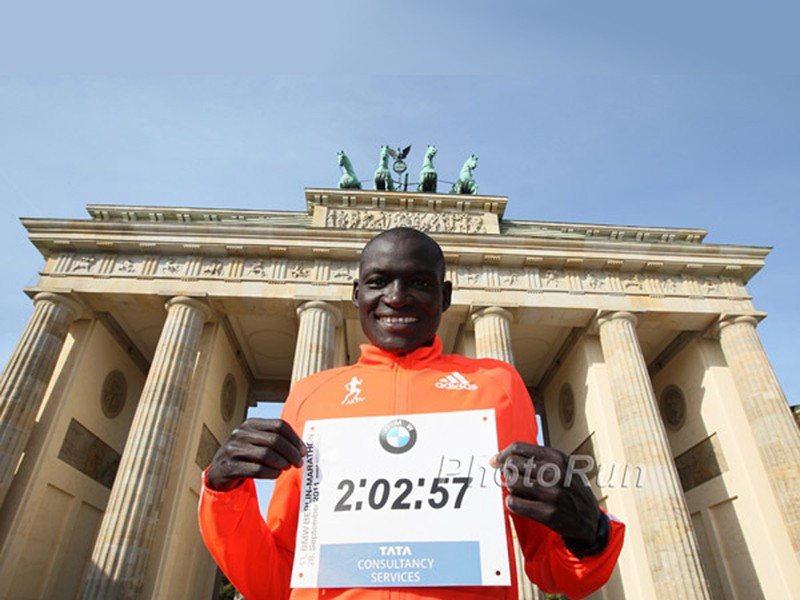 Kenyan Dennis Kimetto at the Brandenburg Gate after setting the World Record at the 2014 BMW Berlin Marathon / Photo: Photorun

Barely hours after he had taken the marathon into a new territory with[link id=”9055″ text=” his 2:02:57 to win the BMW Berlin Marathon”], Kenyan [link id=”566″ tax=”post_tag” text=”Dennis Kimetto”] lounged back in his chair after his evening meal and before the post-race party, reflecting on how far he had come and the road ahead.

The bad news for his rivals is that the man who first burst on the international scene in 2012 is confident that, at the age of 30, he can have at least another five years at the top level. Then he thought again.

“Actually, I think I could still be a very good runner ten years from now, at 40,” said Dennis Kimetto, a quiet smile indicating this was no joke.

Sitting alongside his friend and fellow runner Wilfred Kigen, Kimetto had time to reveal more of himself. What appears at first and, especially to non-Swahili speakers, as the epitome of shyness, is a man with inner steel, a determination fired by both the memory of seeing the great duels of Paul Tergat versus Haile Gebrselassie on television and of a childhood where money was scarce.

“We didn’t have television or radio at home, so at the 2000 Olympics in Sydney I went to the community centre in the village and watched. The memory of Haile versus Tergat in the 10,000m inspired me. I thought, perhaps I could run at that level?” wondered the new world record holder in the marathon.

The journey has not been easy, even by the standards of a boy growing up in a family of four brothers and three sisters and parents who were subsistence farmers near Kapngetuny. For much of his childhood, Dennis had to work on the small landholding rather than attend school. However, when he decided in 2008 to devote time to running, his parents gave him their full support.

“My father said, train as well as you can and go for it, you can change your life”, said Kimetto, looking back on six years which have transformed not only his life but that of his family, thanks to his earnings from running.

Destiny played a hand. Training near his home one day, he met what had become a familiar sight to young Dennis Kimetto: the group led by Geoffrey Mutai whose camp was nearby. Mutai invited him to join their run that day, liked the look of his stride and said, why not join us full time?

The move paid off as Kimetto won eleven domestic races in 2010, including the Nairobi Half Marathon, clocking 61:30 but at altitude which made the performance worth a significantly faster time. Yet the distance running world wasn’t prepared for what happened at the prestigious Ras Al Khaimah Half Marathon in the United Arab Emirates in February 2012.

“I stood on the start line and looked around. I felt scared, seeing runners like Wilson Kipsang alongside me. Nobody knew who I was,” said Kimetto, who went on to astound athletics cognoscenti by beating the illustrious field in 60:40.

He broke the hour for the first time in his next race at the distance with 59:14 in Berlin just six weeks after Ras Al Khaimah. A world record over the rarely run distance of 25km followed five weeks later in what was fast becoming a home from home: Berlin.

His marathon debut was sensational, finishing barely a stride behind Geoffrey Mutai in what still is a world record marathon debut of 2:04:16 in Berlin in 2012.

With every race he seemed to become yet more formidable. In his Chicago debut last October he broke the course record with 2:03:45, having won Tokyo earlier in 2013 with another course best. The first glitch came when he dropped out of Boston this April with a hamstring injury but Kimetto proved a quick healer.

“When I asked his physio back in [link id=”81″ tax=”category” text=”Kenya”] how well Dennis had recovered from his injury shortly before Berlin, he said: “Number one. Dennis will be number one, no problem”, said his Dutch manager Gerard van de Veen.

Having become the first man in history to break 2:03 for the marathon and improve Wilson Kipsang’s time by 26 seconds, Kimetto can relax and contemplate the future.

Naturally enough, his opinion whether a sub 2 hour marathon would ever be possible is much in demand. Allowing for the effects of post-race jubilation and his current level of English, it would be wrong to interpret a nod of the head or a smile as a definite answer either way.

But after Dennis Kimetto’s achievements in an international running career of barely three years, who knows where his limits may be?

In this article:BMW Berlin-Marathon, Dennis Kimetto