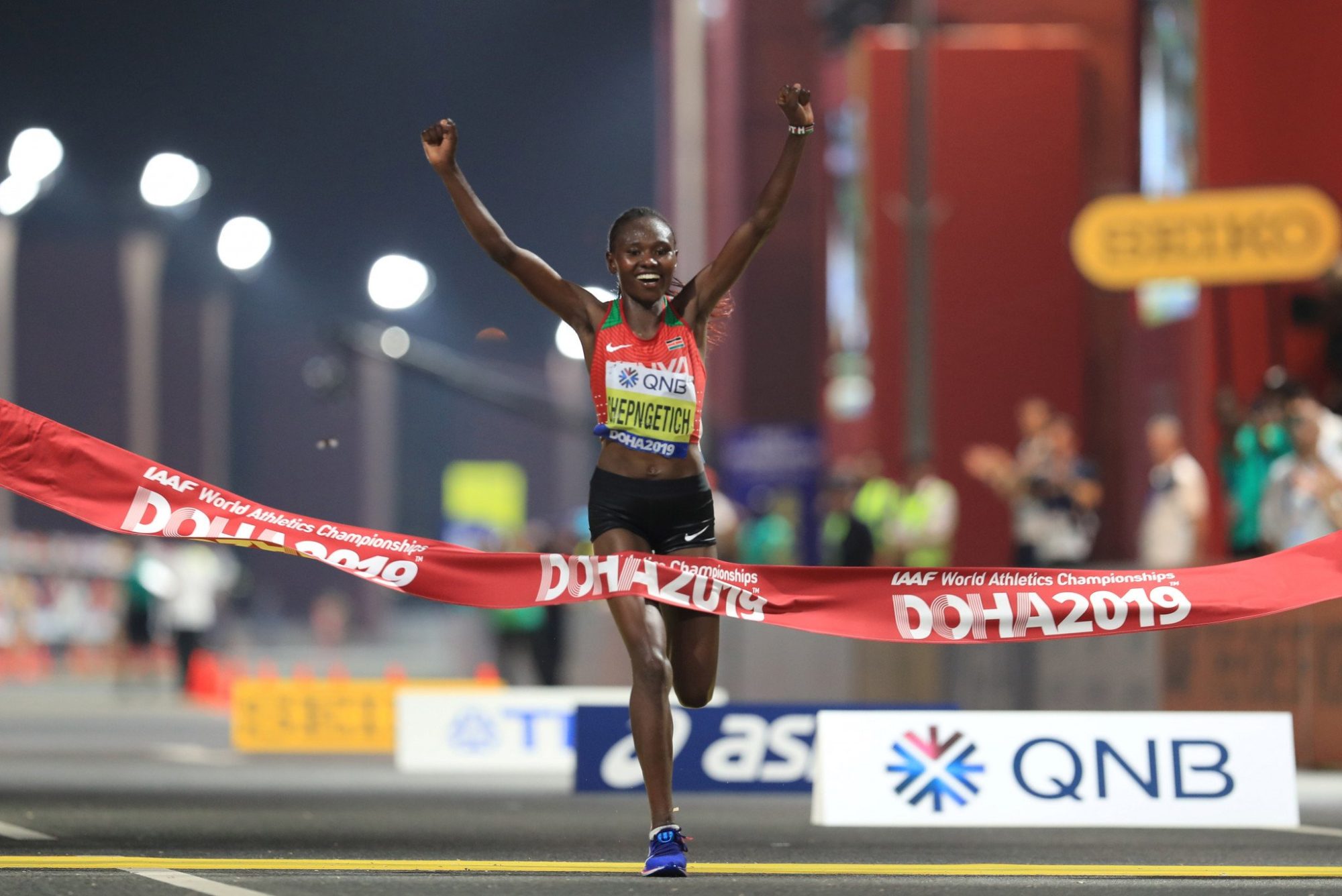 Kenya’s Ruth Chepngetich clocked an impressive 2:32:43 in sweltering heat to win the first World Athletics championships Women’s Marathon Final, held at midnight on the Doha Corniche in the Qatari capital on earlier today.

With temperatures soaring above 32C and with humidity reaching over 70%, 28 of the 68 starters – who were unable to withstand the heat – withdrew at some points in the race, including all the three Ethiopian runners led by Tokyo Marathon winner Ruti Aga.

Linet Chebet of Uganda, was also taken away in an ambulance after collapsing due to exhaustion.

After the race, Chepngetich said: “It was a tough race but I knew what to expect as I ran in Dubai. “I trained for this weather running in the afternoon when the sun was high.”

The 23-year-old took the first gold medal of the Doha 2019 championships in 2:32:43 with athletes attempting to complete six 7km loops of the Corniche in the Qatar capital.

African athletes also made good strides in other events on day one of the World Athletics championships.

Manyonga and Samaai through in Men’s Long Jump

The qualifying distance of 8.15m in the men’s long jump was a huge one for defending champion Luvo Mayonga who could only register 7.91m in the group phase.

His jump, however was enough to see the South African qualify for the finals of the event. Manyonga, who holds a Personal Best of 8.65m would have to bring his best on sand to retain his title after finishing 10th on the table.

Three Africans have sealed spots for themselves in the semi finals of the men’s 100m scheduled for Day 2.

Expectedly, Africa’s champion Akani Simbine of South Africa won the race in Heat 1 in 10.01, as well as young sensation Raymond Ekevwo of Nigeria who claimed second in Heat 3 in 10.14 to secure a next round berth.

Unfortunately, a 10.46 was not enough to see Nigeria’s Usheoritse Itsekiri gain access to the next round. Joseph Amoah of Ghana and Ebrima Camara of Gambia who both finished in 10. 36s respectively did not also gain qualification.

Africa’s second fastest man, Divine Oduduru did not feature in the 100m heats, stating he would rather focus on the 200m event.

Sum is back in the women’s 800m Semis

The 2013 World champion is back. Kenya’s Eunice Jepkoech Sum qualified for the 2017 edition of the championship but withdrew due to injuries. Sum is primed for a medal in the absence of defending champion Caster Semenya.

Sum finished fourth in Heat 2 in 2:02.17 to qualify for the semis, while the 2011 Commonwealth Youth Games champion, Halima Nakaayi of Uganda finished second in 2:02.33 in Heat 1 to join the fray of semifinalists.

Nakaayi’s compatriot Winnie Nanyondo, a bronze medallist at the 2014 Commonwealth Games in Glasgow won Heat 3 with 2:00.36 to qualify as well.

However, another Moroccan Malika Akkaoui did not qualify for the semis.

With 9:18.01, Beatrice Chepkoech, current world record holder, leads a pack of four other continental rivals to the finals of the event.

The Kenyan, who ran 8:44.32 to earn the world record last year, clinched the top spot in Heat 2 as compatriot, Celliphine Chespol raced a time of 9:24.29 to secure a final spot from Heat 1.

World champion in 2015, Hyvin Kiyeng of Kenya booked a spot via a 9:29.15 in Heat 3 finishing top place at the expense of teammate Fancy Cherono who did not qualify after reaching the finish line on 9:32.34.

Ethiopia’s Lomi Muleta and countrywomman Zerfe Wondemagegn failed to book a spot in the next round.

African champion Hugues Fabrice Zango of Burkina Faso laid down the marker with the second best jump of the men’s Triple jump qualifying. Zango easily surpassed the qualification mark of 17.10m, posting 17.17m (-0.3) to seal his spot in the final.

However, two other African athletes who entered the competition could not make it out of the qualification stages.

Yasser Mohammed Triki of Algeria finished in 20th place with a best mark of 16.62m while Zimbabwe’s Chengetayi Mapaya couldn’t reproduce his PB of 17.13m, but rather settled with a best jump of 16.36m to miss the spot in the finals.

Dabo already up for fairplay award in the Men’s 5000m

This event saw one of the greatest highlights of this championship and could be recognized as a moment of fairplay at the 2019 IAAF awards.

Dabo’s show of sportsmanship cost him to finish four minutes later than the last man on the track. The African finished 18:10.87 against Athlete Refugee Team’s Tachlowini Gabriyesos on 14:28.11s.

Meanwhile Ethiopia’s Selemon Barega got off a flying start qualify for the finals in 13:24.69 while fellow country-man Muktar Edris earned a season best with 13:25.00.

Telahum Haile Bekele of Ethiopia also gained a place in the finals after finishing 13:20.45, while Nicholas Kipkorir Kimeli was on spot in 13:20.82 to make the cut.

Lahoulou, Touati and Alowonle up in 400m Men’s Hurdles

Algeria’s Abdelmalik Lahoulou, qualified for the semifinals after clocking 49.54.

47.76 secs was enough to earn Mohamed Touati of Tunisia the slot to the next round while Nigeria’s Rilwan Alowonle also secured a spot with 50.04.

As the championships continues on day two, Africa is certain to have her own bite of exhilarating performances in Qatar. 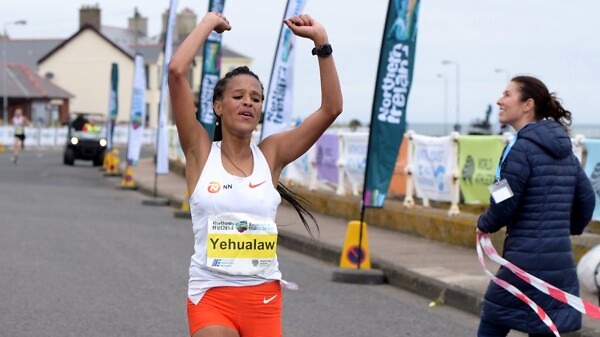