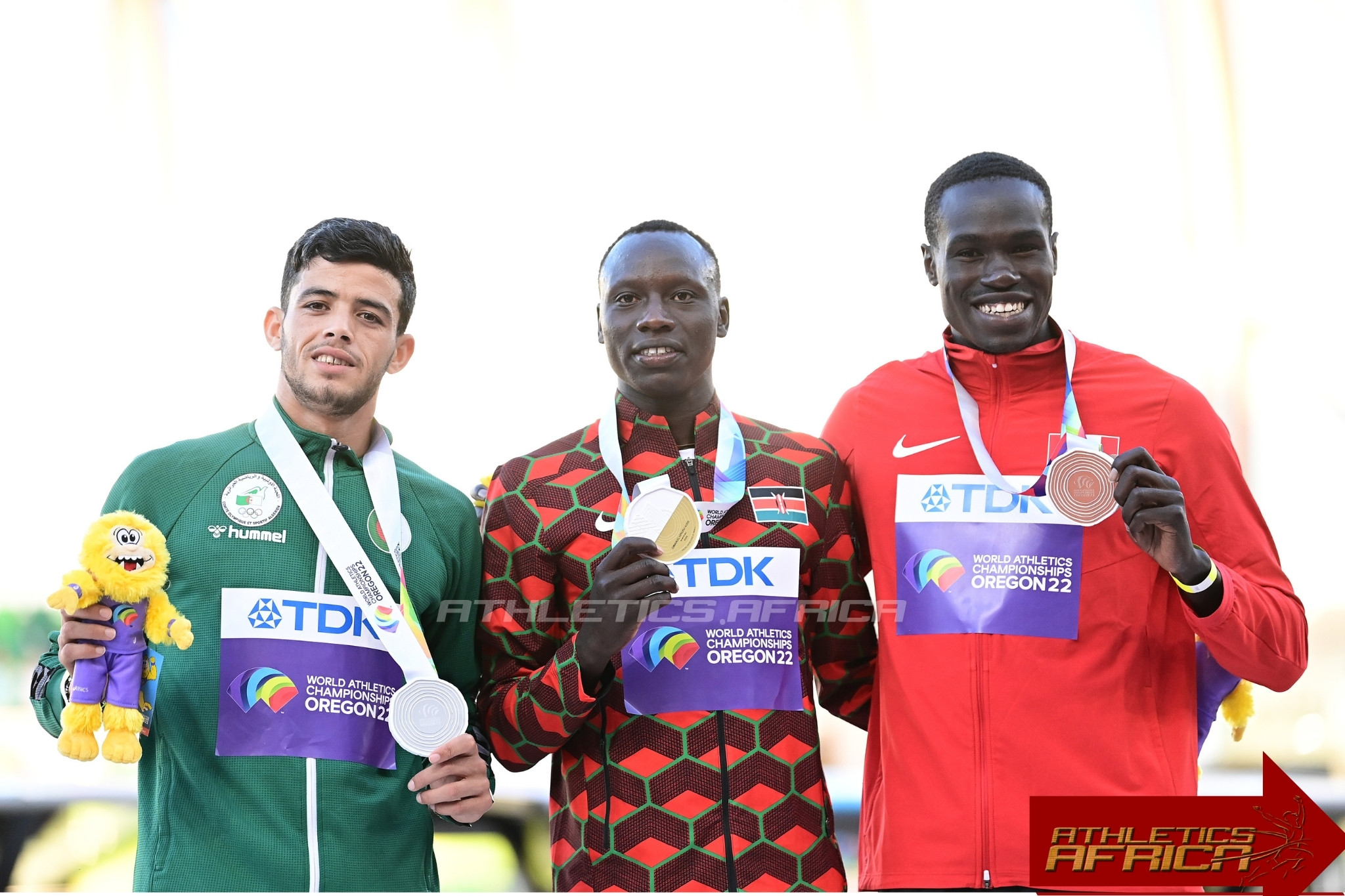 Day Nine of the World Athletics Championships Oregon22 was a big day for the African athletes, who won a total of six medals, including gold medals by Ethiopian Gudaf Tsegay in the women’s 5,000m and Emmanuel Kipkurui Korir of Kenya in the men’s 800m.

It was an African sweep in the women’s 5,000 metres, led by Gudaf Tsegay, who won gold after winning a silver medal in the women’s 1,500 metres earlier this week.

“I have been training well for 1500m and this helps spring on the home stretch,” said Tsegay. “I am happy for this result. This win is for all of Ethiopia.”

For the majority of the race, Tsegay was leading, but in the last 200 metres she was neck and neck with Beatrice Chebet of Kenya and Sifan Hassan of the Netherlands. It seemed as if the two were going to outkick her.

“I want to thank God for granting me to win silver today. I did not expect to win,” said Chebet. “It was a matter of tactics. I was well positioned. I am happy to bring a medal to my country, and I know they are proud of me.”

In third, securing another medal for Ethiopia, was Dawit Seyaum at 14:47.36. Hassan couldn’t hold on to make the podium and finished sixth.

“So, I trained well and prepared myself hard for any kind of medal. For five years, I was having injuries, so this result is very special for me,” said Seyaum.

Emmanuel Korir of Kenya timed his move perfectly and had just enough in him to win his second consecutive global medal in the men’s 800 metres, following his gold medal at the Tokyo Olympics.

He out-kicked Canada’s Marco Arop, who led almost the entirety of the race, to win with a season-best time of 1:43.71.

“It was tough. I was expecting a faster race, but I won and I am very happy for this result,” said Korir. “I knew there were some guys close behind me in the last 100m. I was expecting someone to come, but no one did.”

“I am happy for me and Algeria. This is a breakthrough,” said Sedjati. “I wanted gold, but I am thankful to God and also to the fact that one of us Algerians won a medal.”

Kenya has won the most medals in this event. Korir’s gold adds to the collection and makes 13 medals for the nation.

Hugues Fabrice Zango of Burkina Faso’s first jump of the men’s triple jump series put him in sight of the podium early on. Zango jumped a season best of 17.55 metres, and the distance was enough to win him a silver medal.

“I was motivated to win gold, but there’s not much left in my legs,” said Zango. “Looking at the season, I was a bit off my regular performance. I went out there to explore. To manage 17.55m is good.”

Last year at the 2020 Tokyo Olympics, Zango made history by placing third in the event, and winning Burkina Faso’s first ever Olympic medal.

Earlier Saturday during the morning session, Nigeria’s Tobiloba Amusan lowers her African record further in the women’s 100 metres hurdles to 12.40 seconds. She ran the fastest time overall in the first round of the event.

“I did not know I was going that fast. The aim was just to qualify,” said Amusan. “At these championships, I am aiming for the podium for sure and want to take the fastest time, trying to execute well.”