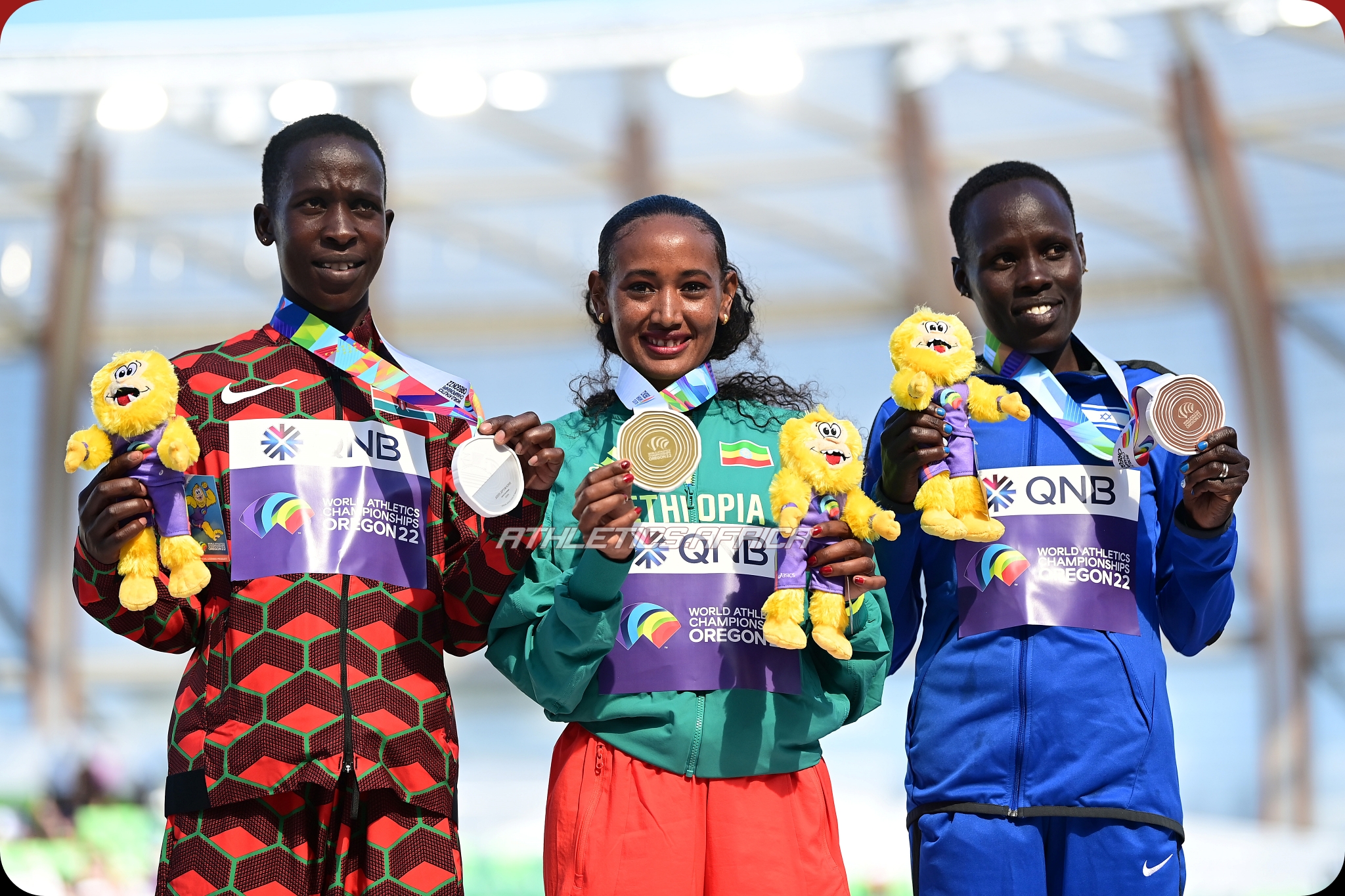 At the beginning of the race, it was clear history was bound to repeat itself as eight Africans got out to a blistering pace, immediately separating themselves from the field. Kenya and Ethiopia each had three runners in that lead pack.

Gotytom Gebreslase of Ethiopia made her decisive move with about two kilometres left, separating from Judith Jeptum Korir of Kenya. Until then, the two runners were side-by-side for most of the race.

With the late move, Gebreslase secured Ethiopia’s second gold medal in the marathon at 2:18:11, a World Championships record. Korir finished second in a personal best 2:18:20.

Gebreslase ran two and a half minutes faster than the previous record, which was set by Paula Radcliffe in 2005. She earned Ethiopia its second gold medal ever in the women’s marathon.

“I did not know I was the first Ethiopian woman to win (the world title since 2015),” Gebreslase said. “All the credit goes to God.”

Early in the race, the chase pack tried to narrow the gap, but the lead group still had a 30-second lead over them at the 6-mile mark.

The lead group went through different stages of the race by surging forward at some points and slowing down at others, with their fastest split time being 3:02 and their slowest being 3:25.

At the 11-mile mark, the reigning world champion, Ruth Chepngetich, stepped off course, ending her chances at a repeat championship.

During the shock, the Ethiopians used this opportunity to push the two remaining Kenyans and even take a slight lead over them. They appeared to be hoping to repeat the success that their fellow Ethiopian, Tamirat Tola, had the previous day in winning the men’s marathon.

With the pace increasing in the middle of the race, the lead pack dwindled to just three runners. The main two were Gebreslase and Korir, who ran side by side for most of the race. As the race reached the last few miles, strategic racing became paramount for the two Africans.

“The Kenyan runner asked me to pass her, but I stayed patient,” Gebreslase said. “Towards 40km, I felt strong and decided to leave.”

Gebreslase ran a 3:10 split over the 24-mile mark to separate from Korir, which would be the deciding moment in the end.

“The Ethiopian runners are very fast,” Korir said. “It’s not easy to run with them, but I tried my best.”

The silver medalist, Korir, and the other top nine runners ran the best mark-for-place times at a World Championship event.

Lonah Chemtai Salpeter, the Kenyan-born runner who represents Israel, surged in the last third of the race to finish third overall and capture the bronze in 2:20:18.

“The marathon starts at 30km,” said Salpeter. “This is when we start to see the ladies closing. I started to move up. Today, it was really a fantastic achievement.”

Finishing fourth and setting a new national record in her country’s best-ever finish was Nazret Weldu of Eritrea. Four out of the marathons’ top six finishers were from African countries.