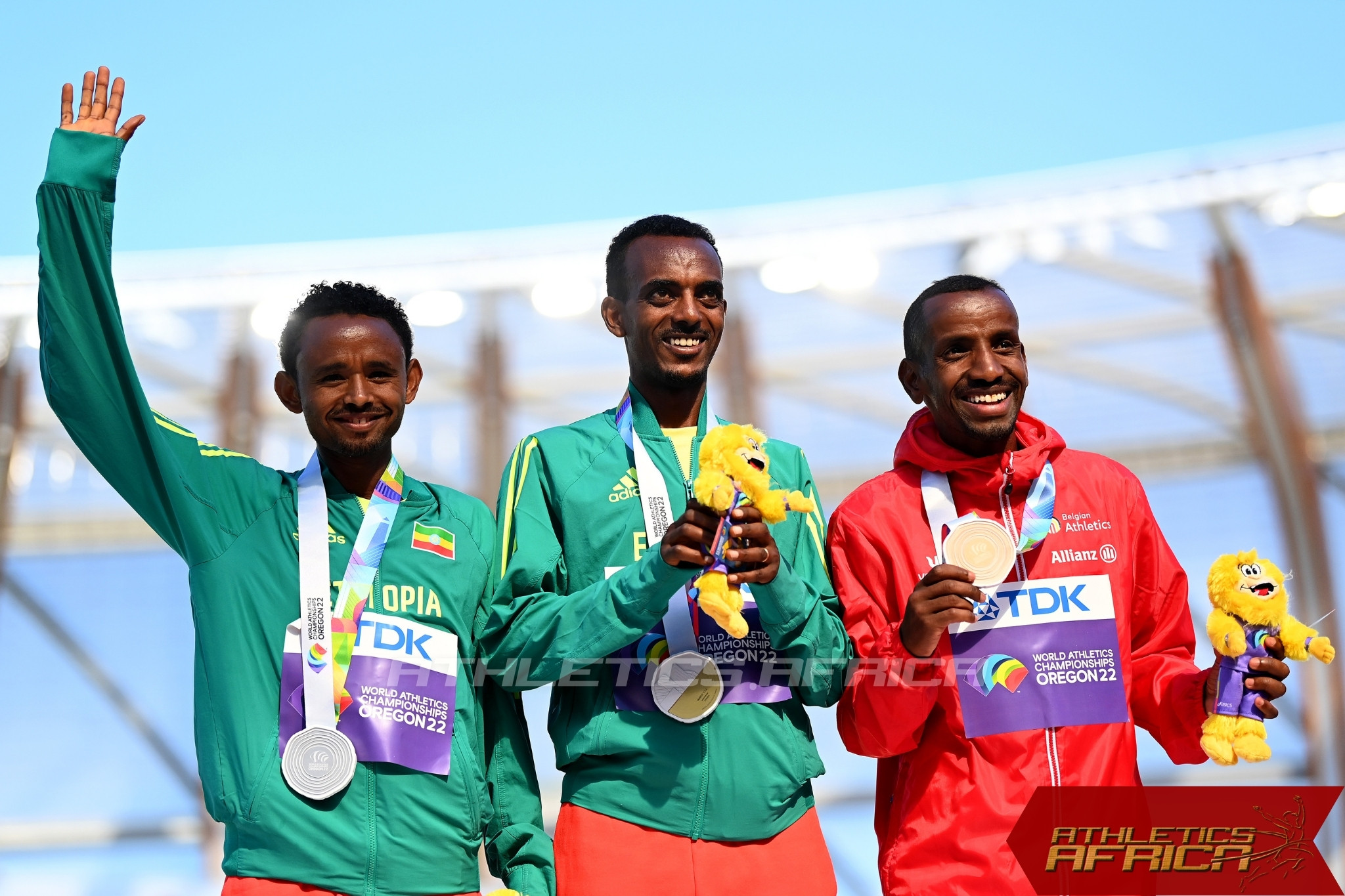 When track enthusiasts around the world think of the marathon today, the athletes that come to mind are from Africa, who are closely associated with this event because of their rich history with the marathon.

The World Athletics Championships Oregon22 were no different. Tamirat Tola of Ethiopia crossed the line Sunday morning in Eugene in commanding fashion, finishing with a time of 2 hours, 5 minutes, 36 seconds and breaking the previous World Championships record of 2:06:54, which was set back in 2009 by Abel Kirui of Kenya.

Tola wasn’t alone in his celebration as fellow Ethiopian Mosinet Geremew finished second with a time of 2:06:44.

It’s the fifth time in history and a second time for Ethiopia that a single country has won gold and silver in this event. Tola waited at the finish line, arms spread, ready to embrace his countryman as he crossed the line.

“Very happy for him and our country,” Tola said. “All our people with the support, thank you very much.”

Added Geremew, “I am very happy to make 1-2 for Ethiopia again. As you all know, Ethiopia has had great names in the marathon, and we are happy to keep their legacy now.”

In past World Championship marathons, the time that Geremew clocked was usually good enough for a victory. However, with Tola pushing the pace, the result was that second through 12th places all had the best mark-for-place finishes in World Championship history.

The first real move of the race came around the 18-mile mark, where the pack started to spread out. Until then, the pack stuck together in a clumped formation, jockeying for position.

Asserting himself, Tola increases his lead to seven seconds during the 21-mile mark. He drove the race so much that around the 24-mile mark, he had a 53-second lead over the field.

The Ethiopians were not the only ones putting their names in the record books. Bashir Abdi, who competes for Belgium and was born in Somalia, became the seventh oldest medalist at a World Championships with his third-place finish in 2:06:48.

The finish was the best by a Belgium athlete since 1983, when Armand Parmentier placed sixth.

“When Tola left, I hesitated a lot,” Abdi said. “By the time I decided to catch him there was already a big gap.

“I think it was a big mistake on my end. I lacked confidence today as I could not run 10 km or half marathons like I’d normally do before the big championships. I am happy with my bronze and did not know it was Belgium’s first.”

Abdi, whose season started with an injury, said he will prepare to run the London Marathon this fall.