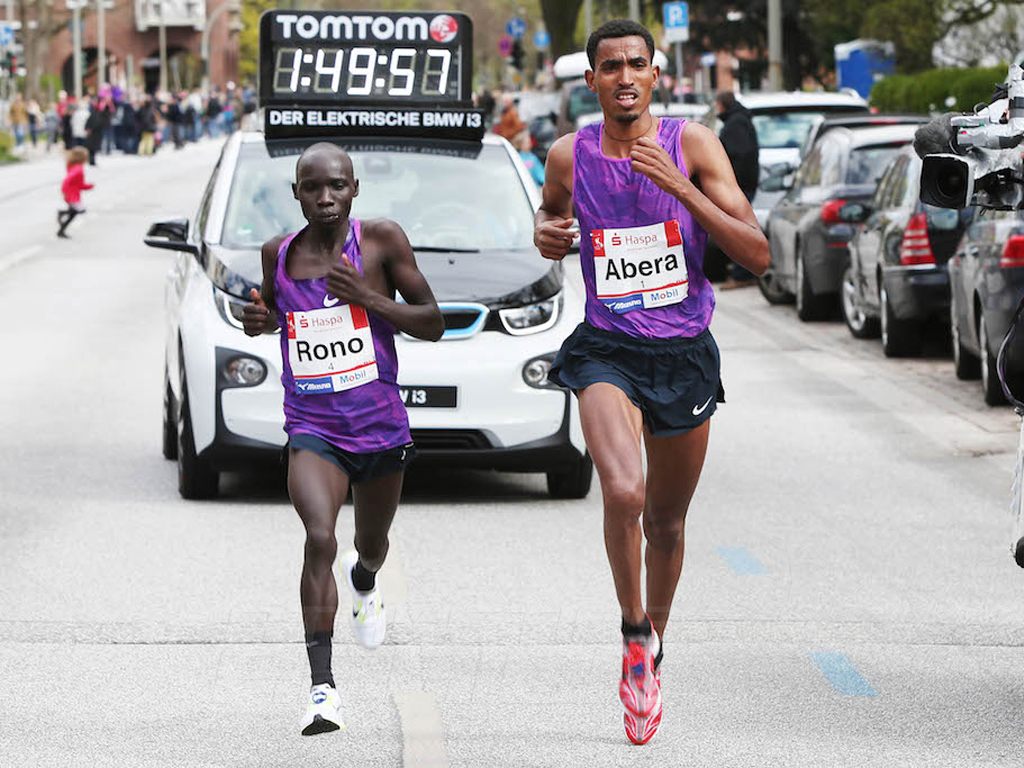 Finishing in 2:21:54 despite windy conditions she made a strong statement regarding the selection of Ethiopia’s marathon Olympic team.

Fellow-Ethiopian and defending champion Meseret Hailu was second with 2:26:26 while Germany’s Anja Scherl caused an upset with a tremendous run for third place. Improving by more than eight minutes to 2:27:50 she has secured Olympic selection.

Ethiopia’s [link id=”873″ tax=”post_tag” text=”Tesfaye Abera”] took the men’s race in 2:06:58. Achieving his second marathon win this year after taking Dubai in a world lead of 2:04:23, he should gain selection for the Olympic team.

Kenyans Philemon Rono and Josphat Kiprono followed in second and third with 2:07:20 and 2:10:44 respectively.

[link id=”292″ tax=”post_tag” text=”Meselech Melkamu”] dictated the pace together with the defending champion Meseret Hailu from the start with the Kenyan Sarah Chepchirchir pressing at their heels.

That scenario came to an end just before 20km when Melkamu broke away in the style which reminded onlookers of her best performance of 2:21:01. She went through halfway in 71:04 and a 15 second lead over Hailu and Chepchirchir.

Despite the strong headwind at times during the second half of the race, Melkamu maintained her pace and the pursuing duo were unable to cut the deficit. [link id=”370″ tax=”post_tag” text=”Meseret Hailu”] finished second in 2:26:26 but Chepchirchir faded to seventh place in 2:30:08.

“I think that without the wind I could have run under 2:20 today because it’s a fast course. This was one of the best performances of my career. I hope it will be enough to win Olympic selection,” said the 30-year-old Meselech Melkamu, who is also the African record holder at 10,000m.

For much of the race Anja Scherl was in seventh place. Her objective from the start was to run the Olympic qualifying time for the German team. Her race splits showed she was on course to break 2:30 and the qualifying time was 2:30:30.

But there was an added proviso – to be relatively sure of booking a trip to Rio, Anja Scherl had to run faster than Anna Hahner, who ran 2:30:19 in Berlin last autumn.

When she went through halfway in 73:57 in seventh place, Anja Scherl admitted she was startled: “I was really surprised by the time, even a little shocked. But until 32 kilometres I had no problems at all, it was a fantastic race for me,” said Scherl, who ran as Anja Schneider before her marriage. 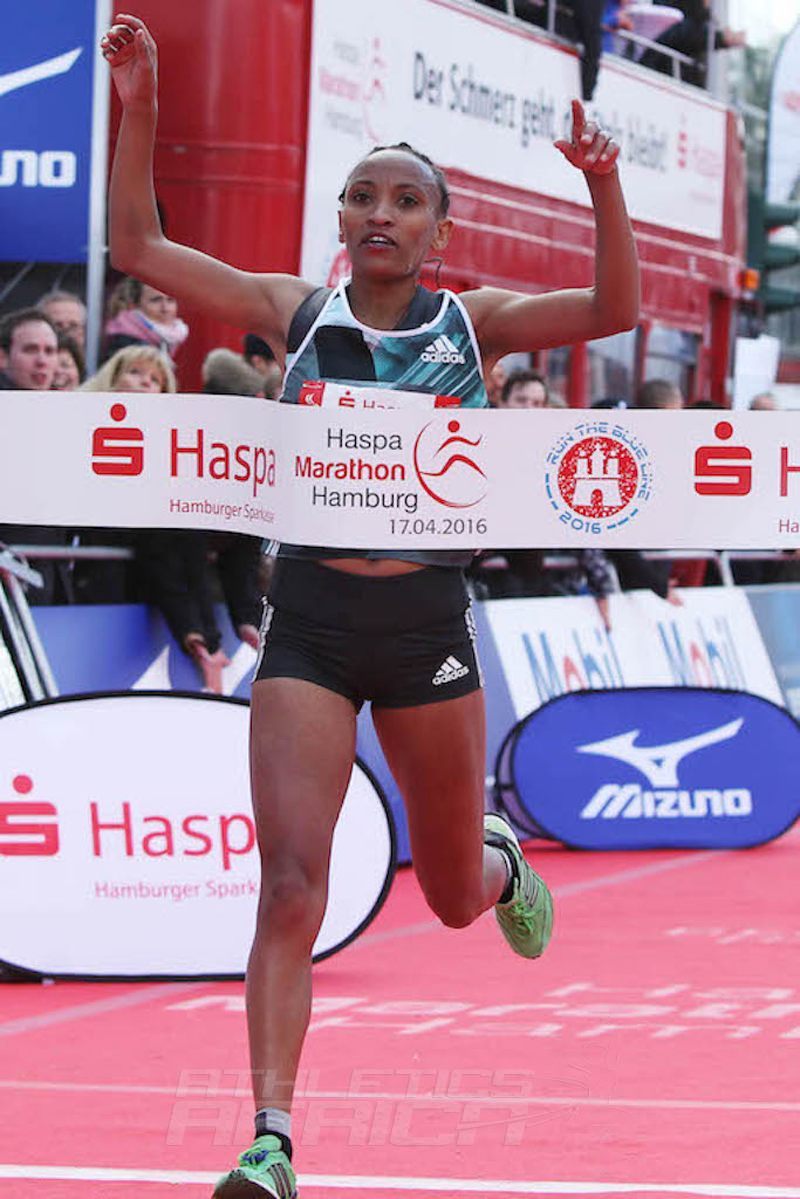 Even the strong headwinds over the second half failed to slow her pace. By 35 km she had improved to fifth, moving up two more places in the last five kilometres.

She took a giant slice off her personal best with an improvement of 8:41 minutes and became the eighth fastest German woman in the marathon of all time.

There was also good news further down the women’s field: Leila Luik ensured that Estonia would be sending all three sisters to the Olympic marathon after she ran 2:42:11.

Her target had been to break her federation’s qualifying time of 2:45 which means she should now join her sisters Liina and Lily in the marathon squad.

Wind was a strong factor as shown by the race splits and the way the men’s race developed. In the early stages a tail wind gave the leading group an extra boost between 7 and 15 kilometres, giving them a split time for the latter of 44:17 and on course for a finishing time of 2:04:30.

The course record of 2:05:30, set by Kenya’s [link id=”297″ tax=”post_tag” text=”Eliud Kipchoge”] three years ago, appeared to be in danger. They couldn’t maintain this kind of pace consistently as headwinds began to blow strongly.

The leading group comprising ten men reached halfway in 62:49 but by 30km the numbers were cut in half. This quintet consisted of four runners plus the Kenyan pacemaker Albert Kangogo and reached 30km in 1:29:29.

The pacemaker then dropped out, leaving the outcome to be decided between Tesfaye Abera and Philemon Ron along with the Ethiopian Abayneh Ayele and Eritrea’s Yekeber Bayabel.

It came down to a duel between the lanky Abera, 1.92m tall, and the diminutive Rono. After 35km the Ethiopian made a break but the Kenyan was back with him two kilometres later. The decisive attack came shortly before 40km when Abera attacked and Rono had no response.

“It was a good race for me. We ran in a big group and worked well together which led to very fast splits at the beginning. When I led later on, the wind was very strong,” said the 24 year old Tesfaye Abera.

As far as his chances of Olympic selection were concerned, the Ethiopian, who is the fastest marathoner this year with his winning time of 2:04:23 in Dubai, commented: “What is important is that when the selectors decide, I am still the fastest Ethiopian.”