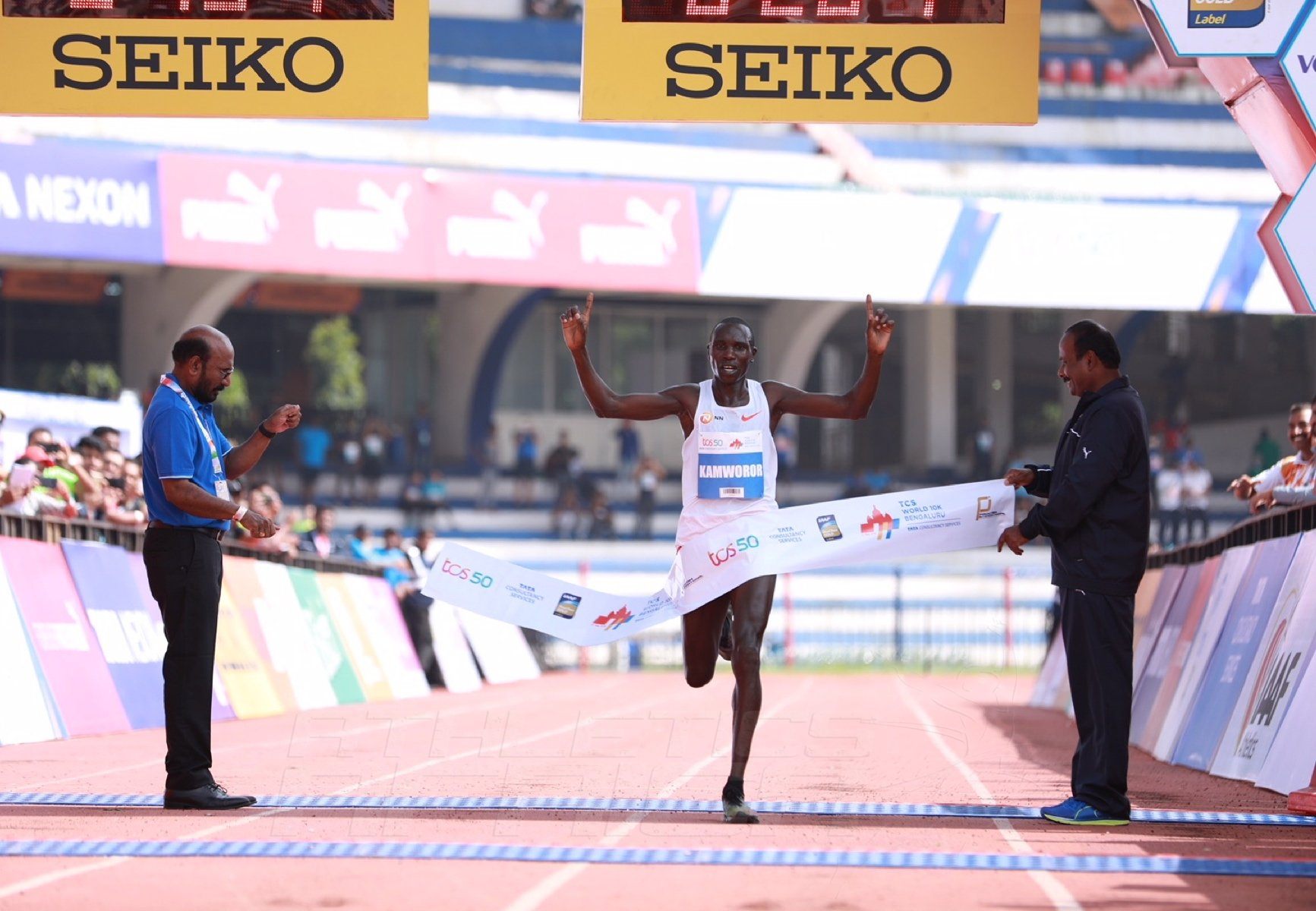 Geoffrey Kamworor fulfilled all expectations and consolidated his reputation as arguably the best road racer in the world below the marathon distance by winning his third title at the TCS World 10K in Bengaluru, India, on Sunday.

The Kenyan, the winner of the last two world half marathon titles and first man across the line in Bengaluru in 2012 and 2014, couldn’t challenge his course record of 27:44 on a hot and humid morning but crossed the line in 28:18 after impressively imposing his authority on the race just after the halfway point.

Kamworor led during the early stages of the race almost from the gun as the rest of the leading pack ran in single or double file behind him through the first 5km, with only his compatriot and defending champion Alex Korio helping with the pace.

A few strides after the halfway point was passed in 14:28 – making it almost certain that the course record would not fall this year – Kamworor suddenly went through the gears.

Only Ethiopia’s Birhanu Legese opted to go with Kamworor as he strode away from the rest of the elite field, throwing in two back-to-back kilometres of 2:42 to reach 6km in 17:10 and 7km in 19:52.

However, in the eighth kilometre Legese had to toss in the towel and by the 8km mark was 50 metres adrift with another 100 metres back to a four-man group consisting of Korio, his fellow Kenyan Edwin Kiptoo, Ethiopia’s 2018 Dubai Marathon winner Mosinet Geremew and Bahrain’s IAAF World Half Marathon Championships Valencia 2018 silver medallist Abraham Cheroben.

Kamworor kept up his relentless pace and deservedly took the plaudits in front of a packed and raucous audience in the Kanteerava Stadium to continue his unbeaten streak which started with his win at the New York City Marathon last November and has continued through his four outings in 2018.

“I think we were all cautious about the weather in the first half of the race. It was very hot, and I think that’s what cost me the course record.

“I came here thinking about the course record and tried the best I could, but I could feel the temperature rising as I was warming up. I was jogging for just three minutes before starting to sweat,” reflected a smiling Kamworor.

“But make no mistake, I love coming to Indian races, I love the atmosphere and certainly want to come back,” he added.

Behind him, there was a desperate battle for second place as the flagging Legese was almost caught by Geremew, who chased him down over the last two kilometres but ended up just falling short, the pair clocking 28:38 and 28:39 respectively.

In sharp contrast to men’s race, the women’s contest was a close-fought three-way affair which only got decided in the final 500m as the first three runners home went under the former course record of 31:46 by Kenya’s Lucy Kabuu in 2014.

A pack of nine runners went through 2km in 6:30 and then 3km in 9:42 before a slight increase in pace saw the pack reduced to the five main protagonists at the halfway point, reached in 16:01.

The Kenya trio of Pauline Kamulu, Caroline Kipkirui and Agnes Tirop were accompanied by Ethiopia’s Netsanet Gudeta and Senbere Teferi. 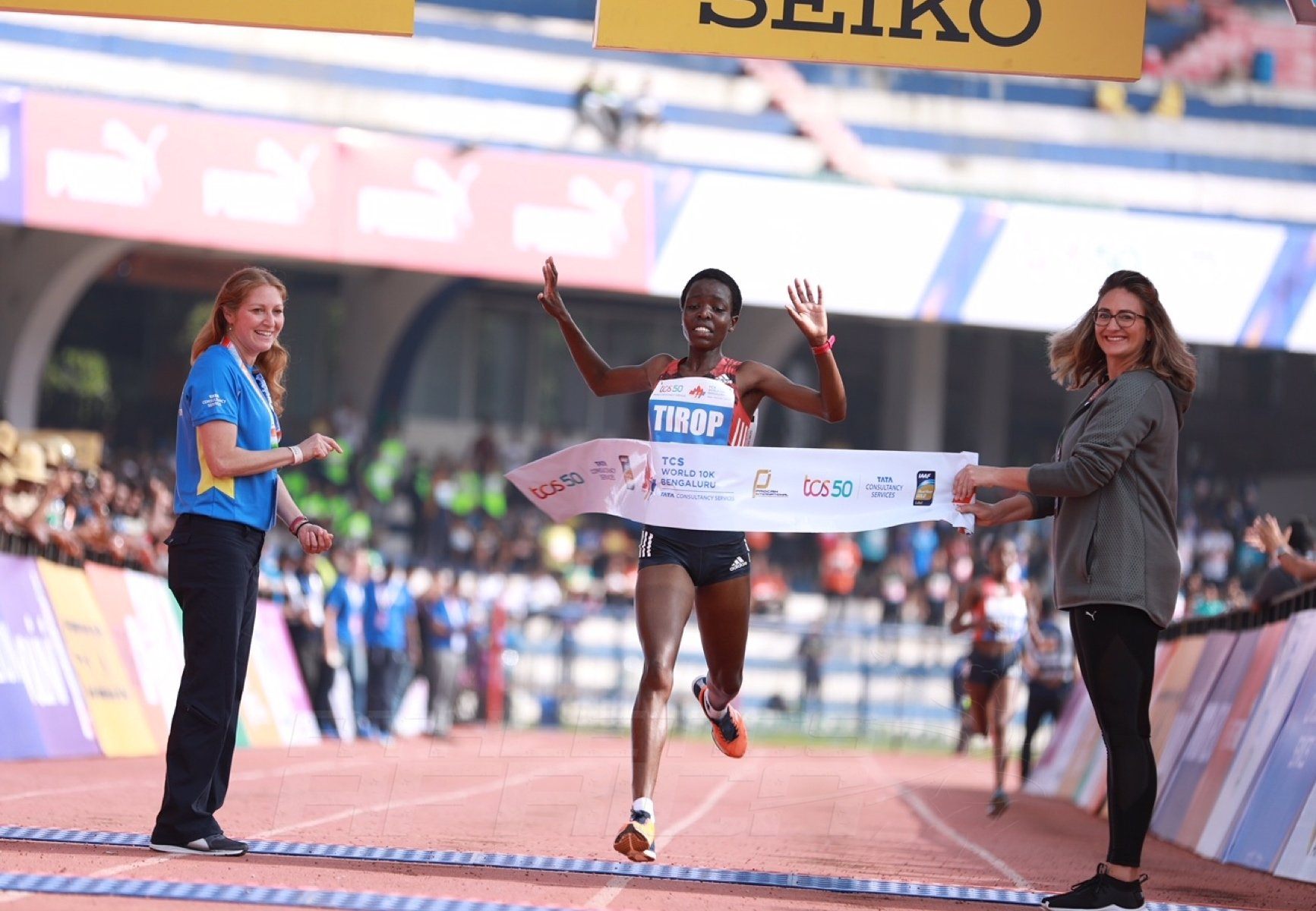 With the IAAF World Half Marathon Championships Valencia 2018 gold medallist Gudeta continuing to force the pace, as she had done almost from the gun, after six kilometres Kamulu started to drop away.

The 7km split was reached in 22:21 – outside course record pace but now only fractionally so – and Gudeta still looked very comfortable at front, with some assistance from Teferi who later admitted that had been the Ethiopians plan.

However, after eight kilometres Gudeta started to tire and her compatriot took over dictating the rhythm of the race as the world half marathon champion drifted backwards to leave the spoils to be decided between the remaining trio.

The penultimate kilometre was visibly very quick on the slight downhill slope of as the runners came back around the city’s famous Cubbin Park and the course record now looked like a distinct possibility.

After 9km was passed in 28:25, Kipkirui started to suffer and was unable to stay with her two rivals.

With 500 metres to go it was down to a head-to-head battle between Teferi and Tirop, the latter using her sub-8:30 speed over 3000m on the track to outkick Teferi about 250 metres from the line before winning in 31:19.

“I knew my training had been going well but I didn’t come here expecting to win as it was such a strong field. Maybe my chances were 50/50. It helped that the Ethiopians made the pace in the first half of the race and I felt very comfortable following them,” said Tirop.

“I had a good race on the track in Doha (over 3000m at the IAAF Diamond League meeting there earlier this month) – and I still think of myself as a track runner even though I won the world cross country title in 2015 – so I knew I had my finishing speed was fine, so I was hoping to still be at the front of the race with 400 metres to go and I could then use my speed.”

Teferi finished in 31:22 with Kipkurui third in 31:28. In tenth place, Indian running got a big boost as Sanjivani Jadhav took almost a minute off the previous national 10km record with a run of 33:38.

Over 24,000 runners registered for the five different races on Sunday in what has quickly become one of Bengaluru’s most high-profile annual sporting events.

In addition to the TCS World 10K Bengaluru 2018 for elite runners, there was an Open 10K, the Majja Run (6km) the Senior Citizens’ Race and Champions with Disability Race (both 4km). 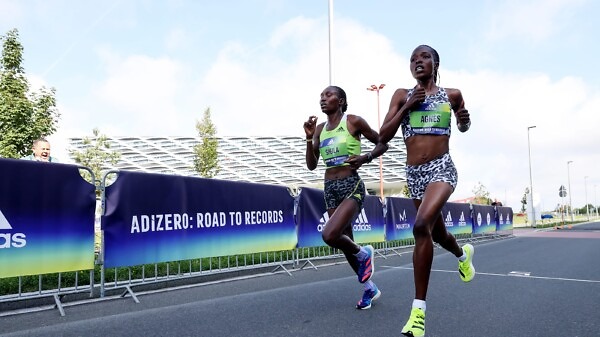