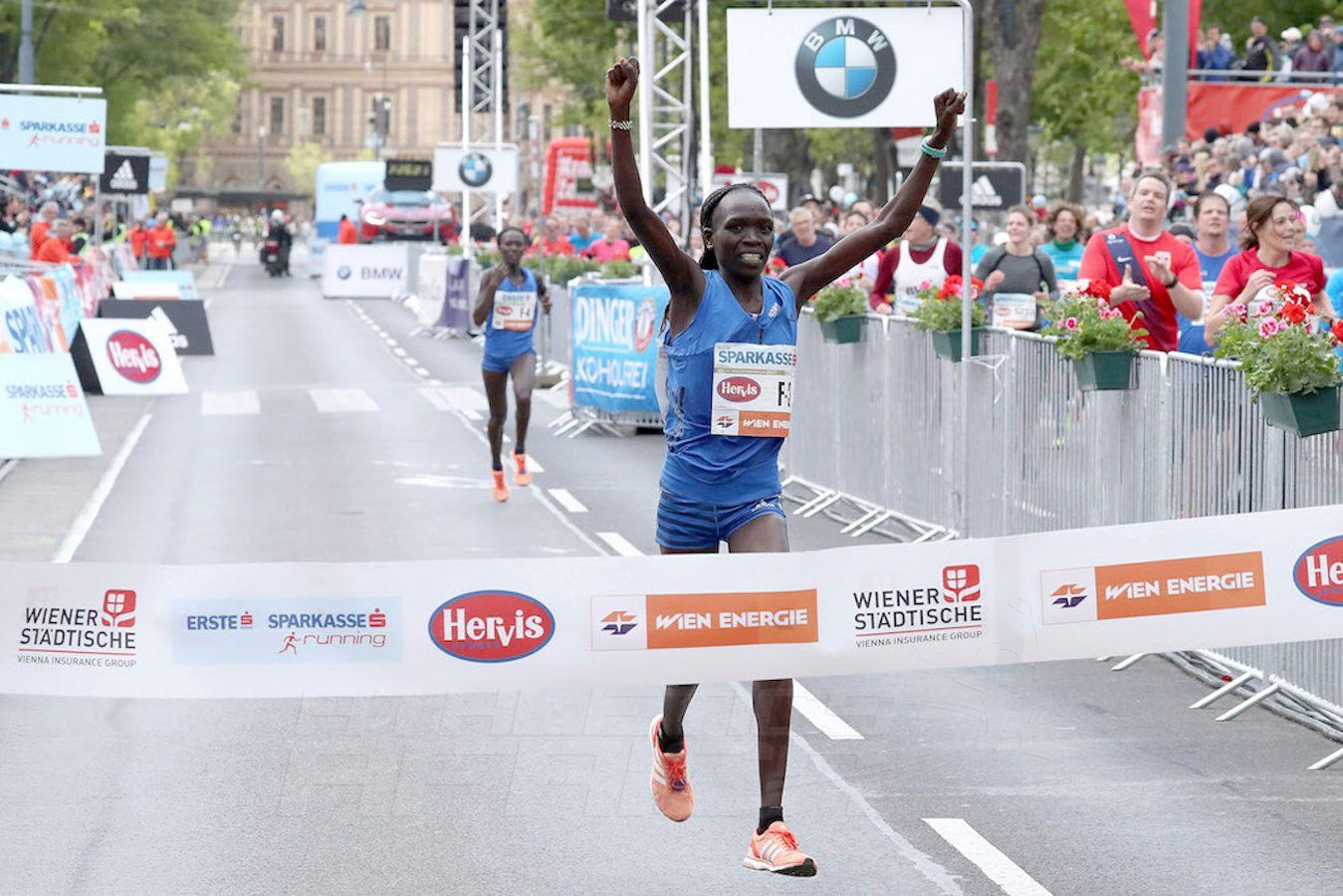 Nancy Kiprop produced the outstanding performance of the 36th Vienna City Marathon when she broke the women’s course record by over a minute and a half in running 2:22:12 and for good measure also became the first woman to win three VCM titles.

Kiprop led a Kenyan clean sweep of the podium with all three women setting personal bests. Angela Tanui was runner-up in 2:25:37 and Maurine Chepkemoi third with 2:26:16.

In the men’s race Vincent Kipchumba of Kenya won with a personal best of 2:06:56, improving his lifetime best by almost four minutes.

He surged away in the closing stages from Switzerland’s Tadesse Abraham who finished
second with 2:07:24.

Uganda’s Solomon Mutai took third with 2:08:25, improving his best by just over one minute. 40,590 runners were in action in all the events of the Vienna City Marathon on Sunday, which is an IAAF Gold Label Road Race.

Nancy Kiprop came to the Vienna City Marathon and conquered in even more convincing style than on her visits in the last two years.

The Kenyan became the first woman to win a hat-trick of VCM titles and what style she showed in the achievement, running a personal best of 2:22:12. It signified an improvement of more than a minute and a half over the previous best of 2:23:47, set by the late Italian Maura Viceconte in 2000.

Reflecting after the race, Kiprop explained that her intention was to go out hard from the start:

“I planned to run the first half fast – in 2:20 pace – because I knew the first half was basically faster and I would find the second half a bit tougher.”

For the first five kilometres Kiprop’s rivals at least had a sight of the dynamic Kenyan. Kiprop went through in 16:28 which pointed to a finishing time of 2:19:00 but Ethiopia’s Rahma Tusa was only 10 seconds adrift and fellow Kenyan Angela Tanui 13 seconds behind.

Thereafter Nancy Kiprop turned the screw, relentless as planned over the first half to keep the
pace sub-2:20.

Kiprop was remorseless in good conditions with temperature at 10 degrees Centigrade at the start. She clocked 32:57 for 10k and went through halfway in 1:09:34, the overall pace still pointing to a low 2:19 which would represent a three minute improvement over her personal best in Frankfurt last October.

Her nearest rival was Rahma Tusa, 1:40 behind though the Ethiopian faded later. At halfway Angela Tanui was in third, 2:38 behind and fellow Kenyan Milliam Ebongon was a distant fourth.

Nancy Kiprop was expecting to find the second half more demanding and so it
proved, her pace slowing for the first time to outside 2:20: “I knew that
from 30 to 35k the course is really tough and this is where I struggled and
there was a bit of wind but the people were cheering me on, I was so
excited.”

Kiprop was still over three minutes clear of her nearest challenger and that is how it remained as a weary Nancy Kiprop crossed the finish line beside the famous Burgtheater.

But recovery came quickly and she was soon contemplating further exploits and a return to Vienna: “I’m confident I could run 2:20 and am already thinking of what to do with the prize money [A total of 21,000 Euro including course record bonus]] to help my school project in Kenya. I would be very happy to return, I feel loved by the people in Vienna and they love my project.”

Nancy Kiprop showed that outstanding performances can be produced not only inside the world famous Burgtheater but also on the finish line beside it.

Vincent Kipchumba confessed surprise at his win but the confident way he moved clear of Switzerland’s Tadesse Abraham shortly after 35k spoke of the confidence he attributed to his new coach: “I was surprised to win but my success is down to my coach, Claudio Berardelli who has advised me since October.”

The pace among the leading men’s group was hardly metronomic. It fluctuated throughout, suggesting an attack on the course record in the early stages when the expected big group went through 15k in 2:05:40 pace.

Halfway in 1:03:21 seemed more realistic and racing became a cat and mouse affair.

Tadesse Abraham went to the front but was joined by Vincent Kipchumba with first Kenyan Edwin Yator and then Uganda’s Solomon Mutai, the 2013 World Championship bronze medallist, coming into contention.

Tadesse Abraham looked short of the kind of sharpness to make any impression on Mo Farah’s European record, despite his pre-race ambitions:

“I was disappointed not to have got close to the record but could still feel Dubai in my legs [2:09:50 in January]. I’ll probably run the World Championships in Doha but shall discuss with my coach first.”

Vincent Kipchumba steadily moved away from the Swiss record holder to win by almost half a minute.

His 2:06:56 marked not only his first marathon win but an improvement of almost four minutes on his prior personal best of 2:10:32 in Dresden in 2016. Clearly he and his new coach Claudio Berardelli have found a winning formula.