A year to go to World Indoors – Portland 2016 – AthleticsAfrica 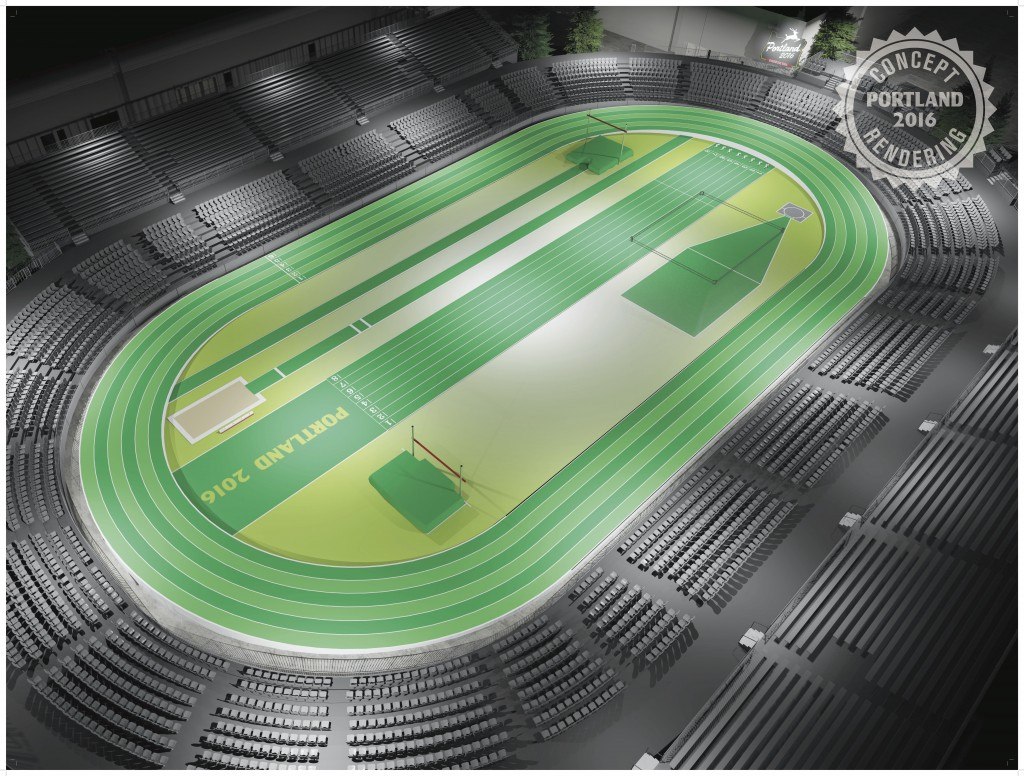 A birds-eye view of what the track and stadium will look like at the Oregon Convention Center in Portland 2016. / Credit: LOC

In less than a year, the world’s best track and field athletes will gather at the Oregon Convention Center in Portland, Oregon to compete in the 16th [link id=”672″ tax=”post_tag” text=”IAAF World Indoor Championships”] in March 2016.

More than 600 athletes representing as many as 200 countries will participate in the 16th edition of the biennial championships which will be held from March 17-20, 2016.

This will be the first time the IAAF World Indoor Championships have been contested in the United States since the inaugural competition in Indianapolis in 1987.

Athletes will compete in 13 men’s and women’s events over a three-day period, March 18-20, with medals awarded to the top three finishers in each event.

On Monday, in celebration of the “One Year Out” milestone, Portland Mayor Charlie Hales led a distinguished panel of speakers at a special media event held in a cavernous hall at the OCC adjacent to where the new indoor track and field stadium will be built.

Two of the top U.S. track and field athletes – 2012 Olympic silver medalist Jason Richardson and American 400-meter indoor record-holder Phyllis Francis – talked about the passion of Oregon fans and their excitement at getting a chance to compete on the world stage in front of friends and family.

The first official renderings of the new 200-metres banked track and 7,000-seat stadium were unveiled, along with the launch of the Portland 2016 website with preliminary volunteer information.

Besides the three exciting days of competition at the OCC, officials revealed plans for a men’s and women’s Pole Vault Festival that will serve as a thrilling kick-off to the meet, free of charge, on March 17 inside the nearby Moda Center.

Those two venues – the OCC and Moda Center – will be connected to Pioneer Courthouse Square in downtown Portland, where the public will be encouraged to gather throughout the meet for a free Fan Experience, featuring live entertainment, food and beverages, a World Indoor track replica, flag display, youth activities and more.

Besides Richardson and Francis, a 2014 University of Oregon graduate, two Portland-based coaches and several athletes were in attendance to show their support for Portland playing host to the 2016 IAAF World Indoor Championships.

The coaches were Alberto Salazar of Nike Oregon Project and Jerry Schumacher of the Bowerman Track Club.

During the event, USATF’s Geer announced that the OCC indoor track facility will also play host to the 2016 USATF Indoor Track & Field Championships on March 11-12, which serves as the Team USA selection meet for World Indoors.