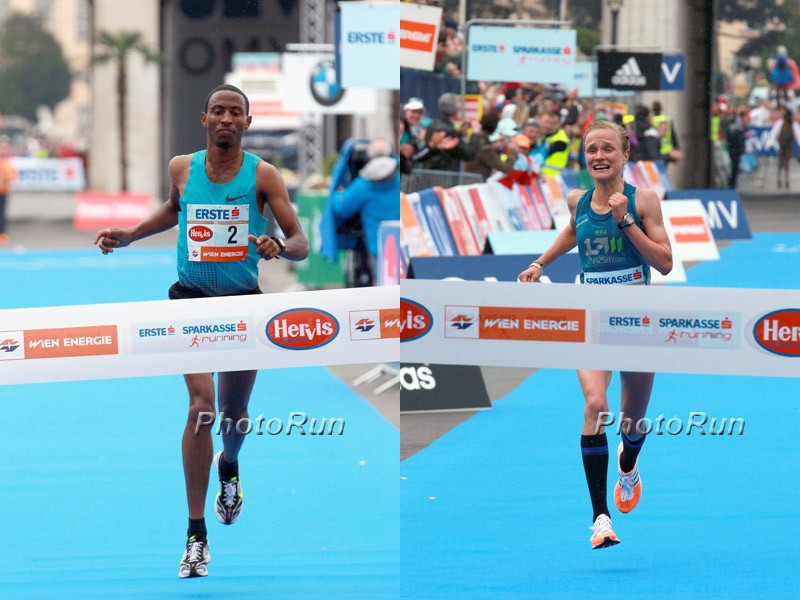 However, there was a major upset in the women’s race. With 300 metres to go Germany’s Anna Hahner passed a struggling Caroline Chepkwony. Hahner clocked 2:28:59 in her first marathon victory. The Kenyan was second with 2:29:18 and Ethiopia’s Marta Lema took third in 2:31:10.

A very fast men’s race developed in fine weather conditions with temperatures of 10 Celsius at the start, overcast skies and hardly any wind. However in the later stages it started raining and the wind picked up.

A group of twelve runners passed the 10k point in 29:45 minutes. With the high pace the group was reduced to eight runners by half way (62:42).

Surprisingly one of those who lost contact was defending champion Henry Sugut. The Kenyan, who had hoped to become the first runner to win in Vienna for a fourth time, started struggling around the 15k mark and later dropped out of the race.

At 25k there were four runners in contention behind two pacemakers: Feleke plus Kenyans Philip Kimuta, Felix Kiprotich and Wilfred Kirwa Kigen.

The 27 year-old, who has a PB of 2:04:50 and is the fastest runner ever entered into the Vienna City Marathon, burst away, covering the 31st kilometre in 2:46. This was the decisive break with none able to follow the Ethiopian.

“Before I pushed the pace I had a look at the others and thought that I should go,” explained Feleke, who said: “It was my goal to win and to run under 2:06. However if I would have had company in the final part of the race I could have run under 2:05.”

Feleke broke Sugut’s course record of 2:06:58 by well over a minute and was almost three minutes ahead of second placed Kering.

The women’s race was a completely different story. Caroline Chepkwony, who was the pre-race favourite, took control from the start. Running in a leading group of four with Lema, Alice Chelangat (Kenya) and Mai Ito (Japan) she moved ahead before the 20k mark.

At half way (1:12:13) Chepkwony was already 20 seconds ahead. While Chelangat, Lema and Ito all faltered badly Chepkwony soon had a huge lead.

Well behind her Germany’s Anna Hahner, the twin sister of Lisa, overtook one after another and was finally second at 35k. “That was the best I could have hoped for,” Hahner later explained. At this point Chepkwony was 2:23 minutes ahead of the German, who had broken 2:30 in last year’s Frankfurt Marathon for the first time (2:27:55).

While Chepkwony looked a certain winner the picture suddenly changed. With a few kilometres to go the Kenyan dramatically slowed and Anna Hahner made up ground.

But at 40k there was still a 1:24 minute gap between the two. However with 300 metres to go Hahner indeed caught the Kenyan, who could barely run any more.

“I am totally overwhelmed and still in dreamland,” said Hahner, who waltzed in the finish are since this year’s motto of the race was “Everybody waltz”. Hahner sealed the first German victory in Vienna since Christa Vahlensiek in 1989.

A record number of 42,078 runners from 127 nations entered the various events of the Vienna City Marathon.