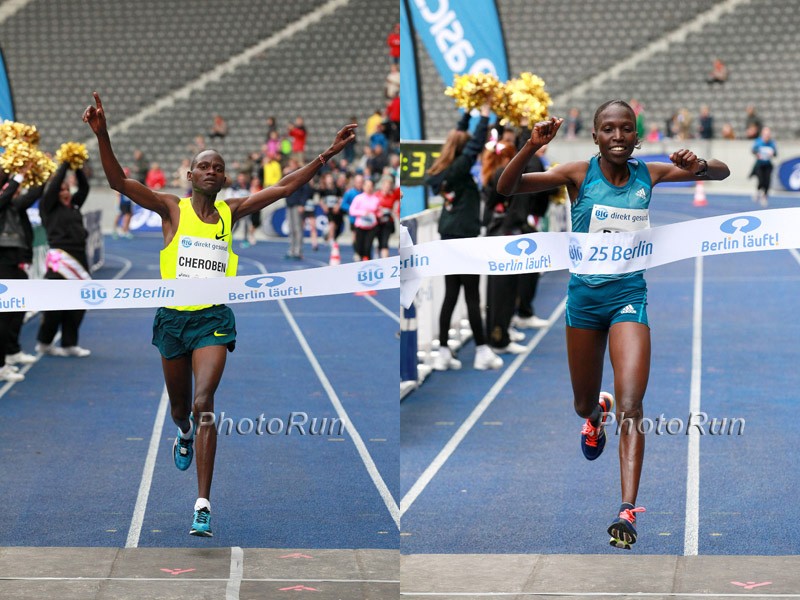 Kenyans Abraham Cheroben and Janet Rono clocked world leading times to win the 34th edition of the BIG 25 Berlin inside the Berlin Olympic Stadium on Sunday.

Cheroben, 21, produced the performance of the day to finish in 1:11:47, which is the fourth fastest time ever run at 25K. Fellow Kenyan Kenneth Kipkemoi was second with 1:12:32 while Ethiopia’s Tebalu Zawude crossed the finish line in 1:13:09 for third place.

Janet Rono was well ahead in the women’s race which she won with 1:24:37. Valentine Kibet of Kenya took second in 1:26:18 while third placed Maja Neuenschwander broke the Swiss record with a time of 1:27:01.

There was a minute of silence before the start in honour of the former president of the Berlin and German sports associations (LSB and DSB), Manfred von Richthofen, who died on Thursday.

Once the runners got off in dry but cool conditions with temperatures between 8 and 11 Celsius a very fast men’s race developed. A group of nine runners passed the 5K mark in 14:00 and then reached 10K in 28:20.

With some tailwind during this first section of the race the split times were faster than expected and even pointed towards the world record time. This mark of 1:11:18 was established by Kenya’s Dennis Kimetto in the [link id=”140″ tax=”post_tag” text=”BIG 25 Berlin” target=”_blank”] two years ago.

Two of the pre-race favourites then lost contact to the leaders. After 12K, Kenya’s double world marathon champion Abel Kirui could no longer hold on. He finally finished in sixth position with 1:14:22.

Defending champion Richard Sigei of Kenya lost ground at around 16K and later finished fourth in 1:13:11. In the leading group it was Cheroben who continued to push the pace. After 18K he was a few metres ahead of his two remaining rivals, Kipkemoi and Zawude.

For a short period it looked as if Kipkemoi, who was tenth in the World Half Marathon Championships earlier this year, might be able to close the gap. But Cheroben was too strong and build a good lead in the final section of the race. Despite a head wind in this part of the course he clocked a superb 1:11:47.

“I think without the wind I could have run a bit faster. Additionally it was cold, but I felt fine,” said Cheroben, who only started competing internationally a year ago. At the end of March he was second in the Berlin Half Marathon in 59:14, beaten by just one step by his training partner Leonard Komon.

“I was disappointed to have lost that race, but today I am very happy to have won,” said Cheroben, who lives and trains in Kitali, which is an hour away from Eldoret. “In the autumn I am looking for a fast half marathon. I want to go sub 59 minutes,” said Cheroben.

Although finishing sixth Abel Kirui enjoyed the 25K. “I am happy with my race. It was the first time I ran a race at this distance and I really liked it. It was great to finish inside the Berlin Olympic stadium,” Kirui said.

At this point she was already 37 seconds ahead of fellow-Kenyans Valentine Kibet and Rodah Tanui. However the pace was too fast. “I knew that I had to slow a bit because I would not have been able to hold onto this for the whole distance,” said Janet Rono, who still managed to increase her lead during the second part of the race.

“It was a very nice race for me, I felt fine,” said Rono, who trains with elite men in Kenya. Among them is the 25K world record holder Dennis Kimetto. “My next goal will be an autumn marathon, where I want to improve to about 2:24.”

During the second half of the race Maja Neuenschwander came through to third place. The 34 year-old broke an old Swiss record. Martine Oppliger was the former record holder with a time of 1:27:11 from 1989. Neuenschwander now improved this mark by ten seconds 25 years later. 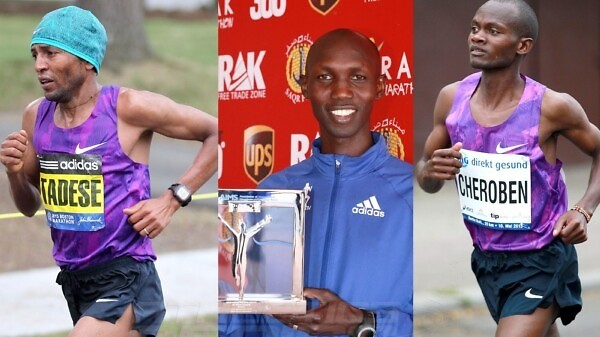 Kenyan former World marathon record-holder Wilson Kipsang will clash with his African compatriots at the 2016 Ras Al Khaimah (RAK) Half Marathon in the... 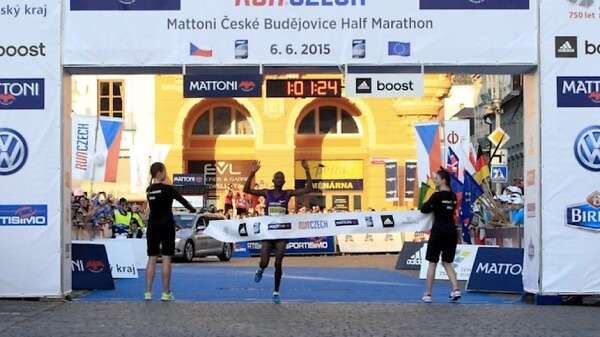 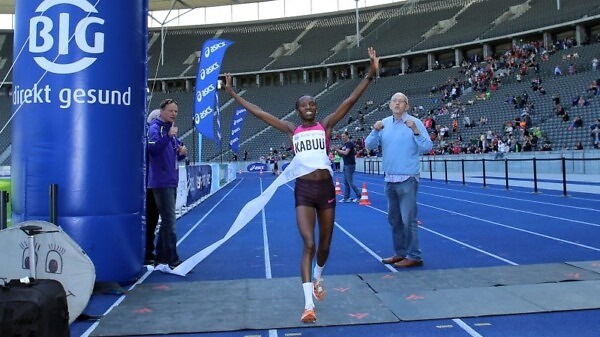 Both winners of the BIG 25 Berlin clocked world leading 25k times this Sunday despite warm weather conditions. While Kenya’s Richard Sigei crossed the...