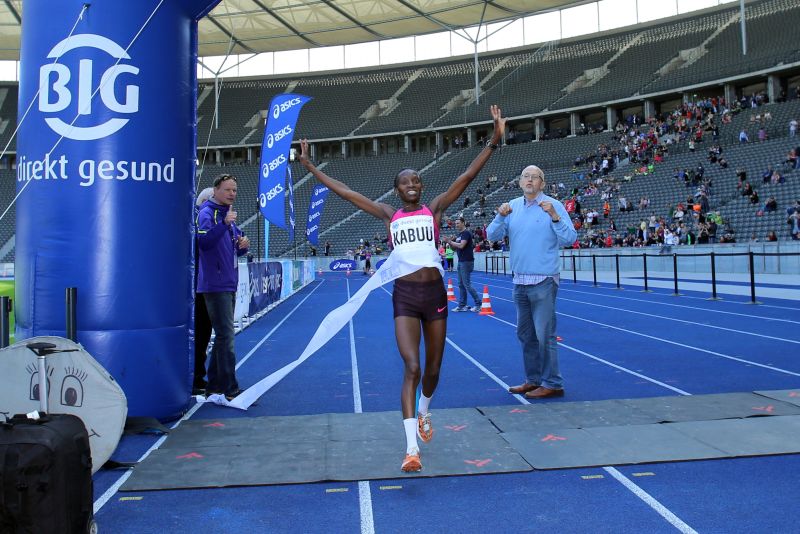 While Kenya’s Richard Sigei crossed the line in the Olympic Stadium in 1:13:34 fellow Kenyan Lucy Kabuu ran 1:21:37. High temperatures during the race made it impossible for the 29 year-old to come closer to the world record she wanted to attack. Mary Keitany (Kenya) established this mark three years ago in the BIG 25 Berlin with 1:19:53.

But Lucy Kabuu’s winning time is still a very good one. It is the third fastest ever run at this distance. Adding all running events organiser BERLIN RUNS registered 10,901 athletes in the BIG 25 Berlin.

“It was relatively warm. So the pace of the leading groups dropped in the middle of the race. But we still saw two very fast races and had a very good event,” said Race Director Gerhard Janetzky.

A fast race developed after the start in front of the Olympic Stadium. In the final part, which is partly slightly uphill, Richard Sigei broke away from the leading group and then built a significant lead. Winning the BIG 25 Berlin was the biggest success so far for the 28 year-old.

There was bad luck for Eritrea’s Ghirmay Ghebreslassie who intended to attack the unofficial world junior record of 1:13:17. The 17 year-old was denied a flight from Amsterdam to Berlin because of a visa problem.

In the women’s race Lucy Kabuu ran at her own fast pace. But she could not get close to the time Mary Keitany – who belongs to the same training group as Lucy Kabuu – ran in 2010.

But with 1:21:37, Kabuu ran the second fastest time in the history of Germany’s oldest big city road race. Kenyans dominated the women’s field, taking the first four places. Agnes Mutune was second with 1:23:08, followed by Esther Chemtai (1:23:18) and Caroline Kilel ( 1:26:14), the Boston Marathon winner from 2011.