The curious case of Kemi Adekoya in Bahraini colours – AthleticsAfrica 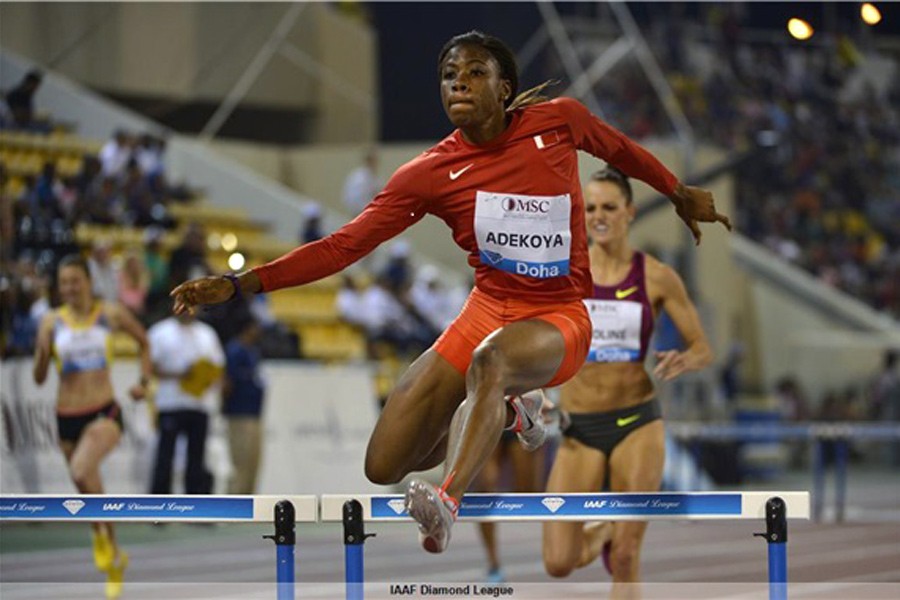 In July 2004, I wrote an article about the ‘African drain’ in the sports code of Athletics, and as the emergence of Kemi Adekoya in Bahraini colours at the IAAF Diamond League in Doha, Qatar last Friday has shown, not much has changed since then.

That year, the IAAF president Lamine Diack told me the trend is not likely to stop. According to Diack, Africa must do more to keep her top athletes.

If we don’t build an elite programme to take care of the future of our best athletes, we will lose them,” Diack said in 2004.

In 2010, after Cameroonian double Olympics Triple Jump medalist, Francoise Mbango Etone changed nationality to France, one of AthleticsAfrica’s bloggers, Francis Ngwa-Niba – also a Cameroonian – wrote of his reaction on hearing about Mbango’s decision.

I thought ‘oh not again’ but the reality is that Francoise Mbango will now defend the French tricolors’ after she finally accepted a French passport, six years after she was first contacted to defect,” Ngwa-niba wrote.

An abstract of a  2013 working paper: the Global Mobility of Highly Skilled African Athletes: Gender, Identity and Politics (by Akindes, Gerard and Saavedra, Martha and Onwumechili, Chuka and Cleveland, Todd and Rahman, Majeed) discussed the challenges and opportunities of the “muscle drain” and its effects on a rapidly transforming Africa.

colonial authorities very early recruited the most talented young athletes to perform in Europe for metropolitan clubs and national teams. In the ensuing decades, on into the post-colonial era, African athletes have been part of an athletic elite in France, Portugal, England, and Belgium.

The migration of African athletic talent has persevered through the series of political transformations in Africa, from colonization through independence and political democratization. African athletes’ mobility has also diversified from simply Africa-to-Europe routes, and now includes intra-African paths, as well as outward movement to both North American and Asian destinations.

It seemed many Gulf countries are now strategically providing citizenship to African athletes as an incentive for them to immigrate to their country and represent them at major world championships.

So as a Nigerian-born former athlete, my first reaction to seeing Kemi Adekoya on the start lane wearing the Bahraini colours was that of shock. I initially thought it was a mistake, then I realised she was wearing the branded Nike designed vest of Bahrain and I, just like Mr Ngwa-Niba four years earlier, also exhaled: Not again!

More alarming in this present case of [link id=”147″ tax=”post_tag” text=”Kemi Adekoya”], who shaved 0.7 seconds off her personal best to win the women’s 400m hurdles in a world leading 54.59 seconds in Doha, is that Africa is not only losing its older and more matured talents in the twilight of their careers, but the continent is now on the verge of losing its future.

Kemi Adekoya, as at last year is an up and coming bright talent dominating the Nigerian local scene and tipped by many local athletics enthusiasts as a potential African champion in the 400m hurdles in Marrakesh this year.

A former Nigerian Olympian, names withheld, told me angrily this week: “Yomi, can you imagine they allow a potential like that to leave under their noses, whilst they are busy scouring America for ‘Plastic’ Nigerians and even African Americans to make their 4x400m team”?

She was given all the encouragement during the Golden League last year and given a lane at the Grand Prix in Warri which was just a few days to the national trial. She came 2nd at the Grand Prix behind Ajoke Odumosu and won prize money in that Meet. People were looking forward to another keen contest during the national trials only to find out that she didn’t turn up. [Commodore Nesiama]

When I raised these concerns with the Athletics Federation of Nigeria (AFN) the Technical Director, Navy Commodore [link id=”148″ tax=”post_tag” text=”Omatseye Nesiama”] rejected the notion that the Federation is at fault.

Commodore Nesiama told me the issue [of Adekoya change of nationality] has been taken up by the AFN President, [link id=”271″ tax=”post_tag” text=”Solomon Ogba”], who was in Doha during the race and made a case to the IAAF to that effect.

“The athlete’s antecedent gave us an indication since last year that something was in the offing. She did not show up at our national trials for the world championships that she would have qualified for,” said Nesiama.

“Then, she sent a message that she was writing her exams. Even, after that we made effort to reach her but the message we got from her coach was that the parents no longer want her to follow athletics but to concentrate on her studies.

“Besides, being in the IAAF top-30 list in her event compels her to submit to the registered testing pool. I personally made effort to reach her to comply with that requirement to no avail. When it was impossible to get her, I asked the AFN Secretary General to register her under the AFN for the purpose of management believing that would make her contact the Federation.

“We had been getting the feelers before now and therefore, it was not surprising that she opted to compete for Bahrain. The protest lodged made the final result to be recorded under Nigeria. If she really wants to leave for Bahrain, she should follow the standard processes and she would be released.”

“We will not keep her unduly if she follows the IAAF established processes. After all, other athletes are also transferring allegiance to Nigeria as well. She is an athlete we have brought up and supported as much as we can and I personally have stated many times that we have great plans for her. This obviously is not part of that plan,” she added.

When I asked him to comment on the questions raised by the Adekoya camp that she was neglected last year and that it seemed the AFN officials are not encouraging athletes outside the President’s home [Delta] state, Nesiama said there was nothing like that within the Federation.

“You see now! the records are there to be verified. What kind of nepotism? Track and field qualification is measurable and very objective,” said Nesiama.

“She was given all the encouragement during the Golden League last year and given a lane at the Grand Prix in Warri which was just a few days to the national trial. She came 2nd at the Grand Prix behind Ajoke Odumosu and won prize money in that Meet. People were looking forward to another keen contest during the national trials only to find out that she didn’t turn up. What was reported during my personal enquiries was what I stated earlier.”

“I don’t think athletes have been more involved and supported like we are doing now. If not so, we won’t be getting the barrage of athletes indicating interest to compete for Nigeria. Nobody is buying American athletes. At what cost are we doing that. If they don’t find something good in what we are doing, they won’t come no matter the enticement if any,” he added.

Irrespective of what has gone wrong in his case, it’s pertinent for the Athletics Federation to realise that Nigeria can no longer afford to keep losing her potential talents, at least not at their primes. It’s important that the AFN puts processes in place to grow and provide incentives for these young talents to see their future in representing their country.

So what do you think about this. How do you think African nations can best retain and protect their best talents? or would you say there is no hope? Have your say below. Sign in with your Yahoo, Disqus, Twitter or Facebook accounts.