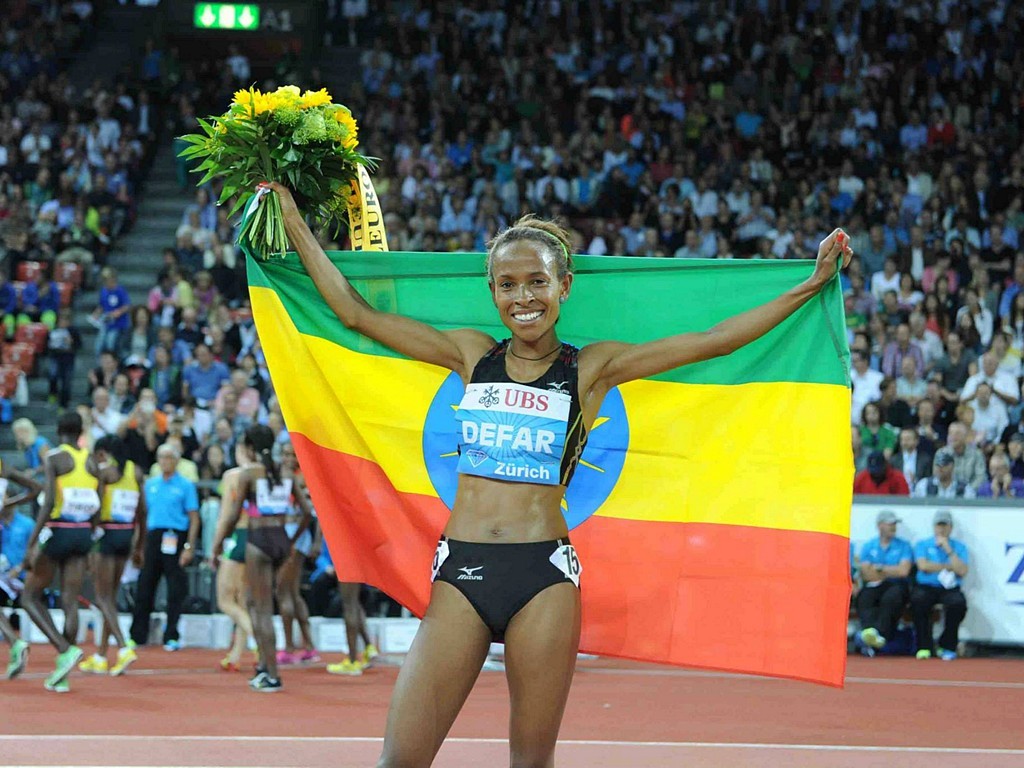 [link id=”274″ tax=”post_tag” text=”Defar “]and [link id=”249″ tax=”post_tag” text=”Dibaba”], the 5000m and 10,000m gold medallists respectively from the 2013 IAAF World Championships, were brought together to battle for supremacy over the shorter distance, something that didn’t happen in Moscow earlier this month owing to both of them deciding to only have one bite of the cherry in the Russian capital. It was just their fourth race against each other since the Beijing Olympics five years ago.

Dibaba may have come in as the World record-holder and 2013 world leader, while Defar was saying ahead of the meeting how tired she was after her recent outings in Moscow and Stockholm, but it was the latter who prevailed in a dramatic and thrilling last lap, coming home just under two seconds in front of her Ethiopian compatriot and rival in 14:32.83.

After a relatively sedentary first 4000m in 11:52.15, the pace started to hot up almost immediately. Dibaba took the lead with 600m to go and Defar stayed on her heels despite the former going through the gears.

Coming off the final bend, Defar then moved on to the shoulder of Dibaba before going past her, although her opponent never threw in the towel and finished in 14:34.82.

Defar and Dibaba may have been just a few seconds short of their fastest times of the year over the distance but they lived up to the word of meeting director Patrick Magyar that, “athletics is not just about races against the clock but also head-to-head competition.”

For the record, Defar uncorked an unofficial last kilometre of 2:40.68 and a last lap of 58.3. Into the bargain, her win meant that she was also was victorious in the Diamond Race and added a $US40,000 first prize as well as the impressive and elusive Diamond Trophy, which she received at the end of the meeting along with the 14 other winners on Thursday night.

In the women’s 800m, there was a rematch between Kenya’s [link id=”275″ tax=”post_tag” text=”Eunice Sum”] and Russia’s Maria Savinova, the gold and silver medallists at the World Championships two weeks ago, and once again it was the African who triumphed.

Sum won in 1:58.82, just 0.11 in front of her predecessor as World champion, and as this event was wide open in the absence of Burundi’s injured Francine Niyonsaba, Sum also took the Diamond Trophy.

In the men’s 3000m Steeplechase, pacemaker Haron Lagat tore through the first kilometre in 2:39.26 but the tempo slowed by more than one second a lap as Stockholm winner Hilary Yego took over in the lead just before the 2000m mark, taking only his fellow Kenyan Jairus Birech with him.

The pair then duelled over the final two laps and left the main protagonists from Moscow trailing in their wake, Yego eventually winning in 8:08.03 to Bairus’s 8:08.72.

Behind the leading pair, Moscow silver medallist Conseslus Kipruto correctly assessed that if he finished third then he would win the Diamond Race and the teenager filled that position in a time of 8:10.76 while three-time World champion Ezekiel Kemboi was a distant 10th.

South Africa’s Zarck Visser was a surprise winner of the Long Jump, flying out to a personal best of 8.32m in the third round.

Visser, who failed to make the final of the World Championships, beat the top four in Moscow as well as four-time World champion Dwight Phillips, who was having his very last international competition.

No one could get close to Visser, who got his big jump into a -0.8m/s wind, the nearest being his compatriot Godfrey Mokoena who leapt 8.11m.

In total, there were 15 Diamond Race trophies awarded along with the US$40,000 first prize that accompanies them – the women’s Shot Put winners were crowned yesterday – before another sell-out crowd of 26,000 in Zurich.

The second of the 2013 IAAF Diamond League finals will be held in Brussels on 6 September.