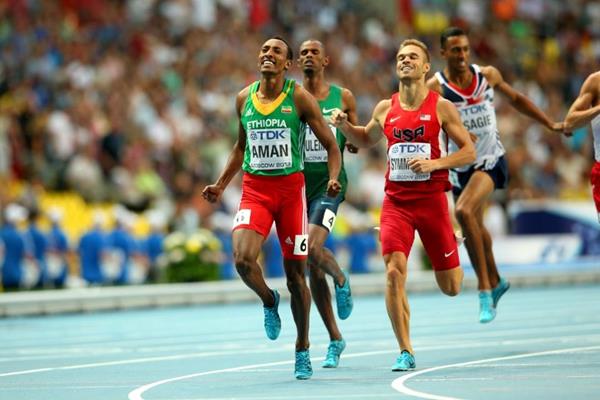 The World 800m champion Mohammed Aman believes he has had the perfect year after his success in the Diamond league and at the World Championships in Moscow.

Speaking to journalists ahead of the 2013 World Athletics Gala in Monaco about his season and plans for 2014, the 19-year-old Ethiopian said he learnt from his London 2012 meltdown and will try the 1500m and 1000m next year, as well as try for the gold medal in Sopot.

“This year for me was a perfect year. I won the World Championships and the Diamond Race and set a PB.

“The Olympics was a big thing for me. In athletics you either win or lose. I lost in London, but it made me stronger for this year.

“I train hard and I believe in myself, which definitely helped when I beat David Rudisha. On both occasions we were also running in the rain, which I like but David doesn’t like.

“If everything is perfect, I think I can run 1:40. Next year, inshallah, I’ll try to run 1:40. David has run very fast, so if I run with him that will make the tempo fast.

“Kenenisa Bekele and Haile Gebrselassie were my idols when I was younger, even though they didn’t compete in my event. In Ethiopia most young runners get into the sport because they want to be like Haile or Tirunesh (Dibaba), but now there has been a big change and young athletes have seen what I have achieved in the 800m.

“I played a lot of football when I was younger, but one day my father looked at my feet and told me that I would be a famous runner.

“When I started in athletics, I began running distances from 100m to 1500m. Running 100m improved my speed, which helped me in the 800m. But when people asked me what event I did, I didn’t want to tell them I did the 800m because I thought they’d think I was lazy.”