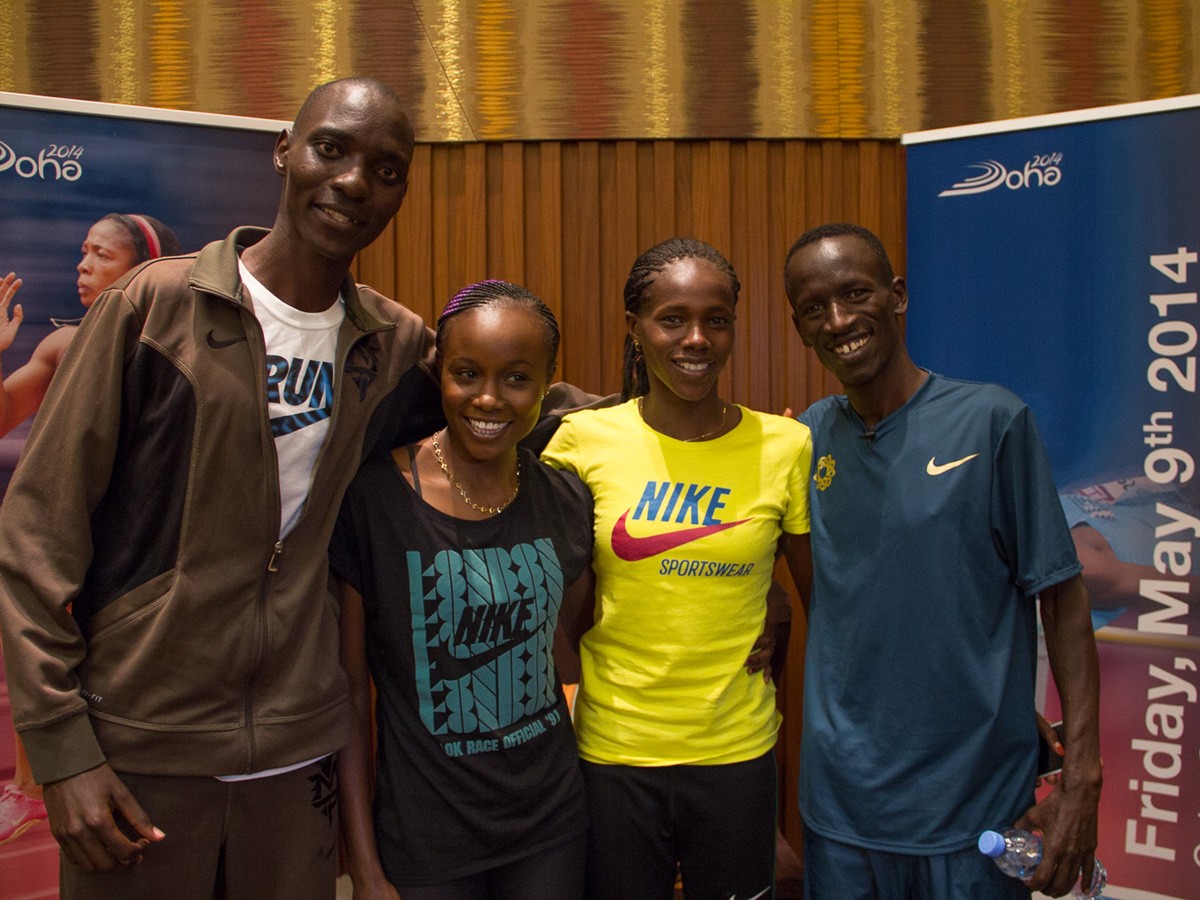 Kenyan athletes Asbel Kiprop, Eunice Sum, Ezekiel Kemboi and Mercy Cherono met with the media on Wednesday at the Intercontinental – The City Hotel ahead of their appearances at the IAAF Diamond League Doha 2014 meeting on Friday.

Two-time world 1500m champion [link id=”207″ tax=”post_tag” text=”Asbel Kiprop”] returns to Doha to collect a second consecutive victory at the Qatar Sports Club but is expecting everything but an easy race.

“The track in Doha is fast, the level of competition is very high and the conditions are always good,” said the 24-year-old who also raced to the Olympic title in 2008.

“It’s a good opportunity for athletes to gauge themselves and to look forward to opening their season in a good way. There are many strong athletes here and I do not underestimate anyone.”

[link id=”275″ tax=”post_tag” text=”Eunice Sum”], who produced one of the biggest surprises at last year’s world championships in Moscow when she triumphed in the 800 metres, is also looking forward to the start of her first full Diamond League campaign. Her goals for the season?

“First to run a personal best,” she said. That target is the 1:57.38 performance that brought her world championships gold. “And also to educate myself in Diamond League races.”

As the world champion, does she plan to race differently now that others will be targeting here?

“No, not really. I have remained the same athlete so I don’t plan to run or race differently. Just to always give my best.”

With two Olympic titles and three world crowns to his credit, [link id=”261″ tax=”post_tag” text=”Ezekiel Kemboi”] is one of the most decorated and experienced steeplechasers in history.

Kemboi is also one of the most enthusiastic athletes on the circuit today, carrying and sharing an ever-present trademark smile. He too is eagerly awaiting his season’s debut.

“I always do well in Doha. I won here in 2009 and then wound up winning almost all of my races that season.”

Kemboi clocked 7:58.85 that year, the second fastest performance of his career. He’s confident that he can faster. Not necessarily on Friday but at some point this season.

“A world record? Not yet now. The first race of the season is always difficult. But it’s always good to start the season here. After Doha I will decide (when to try to break the world record). I will see how my body is doing.”

Cherono made no predictions but isn’t counting herself out either. “I’ve trained well and am in very good shape – I have no doubt about that,” she said. “I expect to do my best.”

Of the four Kenyan athletes in Doha, she’s the only one that will be making her Doha debut.

“This is my first time in Doha, it’s a very nice place. It is a bit hot here but I am very excited to race here,” Cherono added.