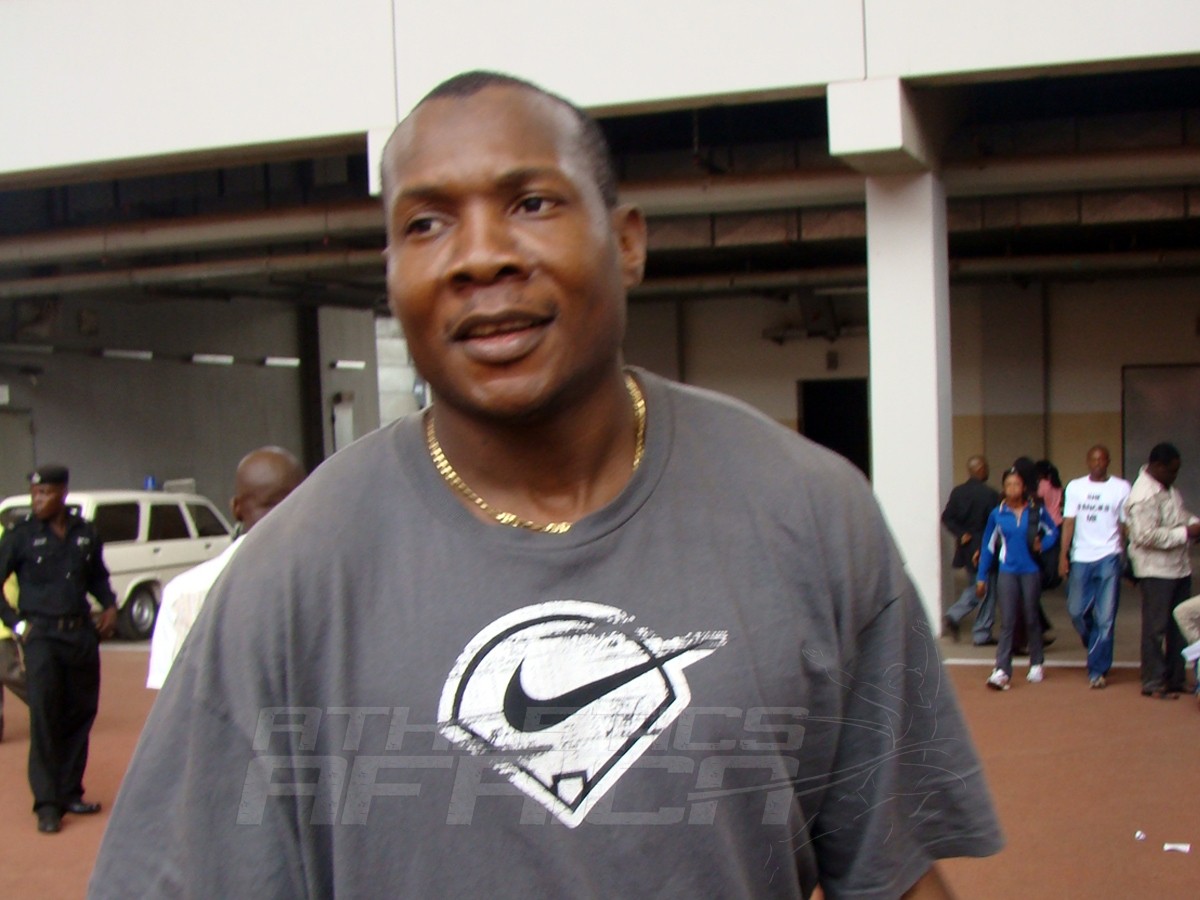 Former Nigeria 100m champion and 2003 [link id=”644″ tax=”post_tag” text=”All-Africa Games”] champion Deji Aliu has taken on a coaching role to focus on grooming the next generation of athletics stars.

According to Aliu, the major goal is to produce an Olympic champion in the shortest possible time since he failed to become one, despite the potentials he had, during his illustrious career as an athlete.

Below are excerpts from the exclusive chat with Athletics Africa:

AA: Can you please introduce yourself to us?
DA: My name is Deji Aliu, African and national champion, Olympic bronze medalist and world junior championship gold medallist.

AA: How will you sum up your athletics career?
DA: Well like you said it has been interesting, rewarding exciting, fun and fulfilling.

AA: How would you compare athletics in your days and now?
DA: Honestly if I have to be sincere, there is no basis comparison between athletics before and now and I don’t think we are making progress. If I say we are stagnant that would be too wicked of me but as it is now, we are neither here nor there. Let’s just put it that way.

AA: What models were adopted in the past, that made Nigeria do ‘better’?
DA: Well there is one thing about preparation, like I always tell my friends and colleagues if you fail to prepare, you are in for a big surprise. Most of the time, you will find out that we always fail in our preparation and there is no way you would fail in preparation and want the best. And that is where we always miss in this country.

Preparation has always been our problem even during our time but the difference between then and now is that we always had athletes who were committed and dedicated and I will be honest with you, I don’t see that calibre of athletes these days.

I was discovered when I was in secondary school when I represented Lagos state at the All Nigeria Secondary School Games in Port Harcourt with Obele Community High School. So it has been part of me from Day one. I love track and field; its part of my life. I am just grateful to God that I was able to pursue it to a conclusive end.

AA: How was the feeling in you first big race
DA: There are different definition of big race, I mean, at my level now, I have participated in a lot of big races that I don’t know which one to talk about. Honestly, there are so many big races. Some people will come and tell you winning an Olympic medal is big.

If I want to go local the first time I came out big was in 1996 at the national trials at the national stadium then. Running with the likes of Chidi Imoh, Davidson Ezenwa, and Olapade [Adeniken] and coming tops ahead of the more established names made it a big race; it was huge.

That was my first big race locally because a lot of people were still seeing me like a home-based athlete. I was still young, just coming from the World Junior Championship and people were not expecting me to blow the way I did, it was a big event for me. I came second in the trials only behind Davidson, the remaining big names were behind me so it was big as at that time.

Outside the shores of Nigeria, there are so many big ones that I cannot even begin mention but based on how people value or see them, I think winning the bronze at the Olympics, then winning the Lausanne Grand Prix that was one memory that still lingers in my mind that was big too. The likes Maurice Green, Dwayne Chambers, Bernard Williams were also in the race. So winning was big. They are some of the big races that I participated in and won and feel so happy about.

AA: Would say athletics has been fair to you and you have also been accorded the respect you deserve from your country?
DA: Nigeria is a place where the prophet is not respected in his hometown but track and field has given me a lot despite whatever recognition Nigeria refuses to give. And if I say I am waiting for somebody to start giving me a role to play it is going to look stupid on my part.

So I just want to go out there, impact the little knowledge I have on those young kids and make the best out of them. So I am not just waiting for people to accord me anything, I want to go out there and do my best. That is what I am out here for right now and impact on them.

Nobody cares, you have to fight tooth and nail to get what you want and I do not have capacity for that.

AA: During your active days as an athlete did it ever cross your mind to dump Nigeria for another country or you never got juicy offers like your contemporaries?
DA: I got loads of offers to decamp and represent other countries. I lived in Italy for 14 years and you know what that means. I am more like a residence there but despite those offers it never crossed my mind to switch nationalities. I don’t know why despite the shabby treatment. I don’t regret the decision to remain a Nigerian. I wake up every morning and I am grateful to God for the opportunities that came my way through Nigeria.

AA: What are you up to now?
DA: That’s what I am working towards right. I know by God’s grace it would go far. If I couldn’t become an Olympic champion I hope to raise one. Akhigbe track club in memory of my late coach Abel Akhigbe which was established a year ago here in Lagos.

We are trying to limit the number so that we would have time for them. Right now we have 12 athletes. Right now I want to see if I can bring in more coaches or reduce their number so that we can give them the maximum supervision and attention necessary that I did not get when I was an aspiring athlete.

Well like I said, I don’t any one to give me hand out and I like to get things based on merit. All my years as an athlete, every time I put on the green and white it was based on merit, coming into coaching, I also want it to be on merit, I know I have a lot to offer and I would not hesitate to take up a coaching job if it is offered.

AA: What is your take in the AFN’s move to recruit mercenaries to run for Nigeria?
DA: I have problem with we importing Americans to come and represent us but I don’t like to run people down that is why I am very careful commenting on that aspect. It is really a big slap on Nigerian coaches.

We have talent in Nigeria it just that grooming them is the challenge we have. The environment is not conducive enough, then the way they are going about it is very wrong. Right now you will be seeing more of me; this is a brilliant idea I will like to be part of.

I spoke with Enefiok [Udo-Obong] and he told me about this programme which I am proud to be part of and when we start things like this, it encourages the young ones because it gives them a sense of belonging and they would want to be part of such programmes and it would breed more competition and with time we will get back to the peak we used to be.

Now we are in December but where are the athletes we would be preparing for next season? We don’t even know them. By May now, we will begin to run around looking for those who would represent us, that type of preparation will get us no where. That is the problem, we have problem with out preparation.

Look at England they already know their athletes and they have given them what they need to prepare for next season. When you go to places like Florida, Houston you will meet them there preparing for next year making use of the warm weather in that place. They have started build up whereas our own athletes are neither here nor there.

Most of them will be preparing on their own without the support of any government. The resources with most of them is very small so there are so many problems that need to be addressed but we just push it under the carpet.

Nike sponsored everything I did that year. They paid for my training, my flight, my kit, my everything. 2003, 2004 they just told me Deji send us your proposal. I just did that and in six weeks they approved it, gave me all the maximum support. Every where I trained they paid the bills. I had less things to worry about and it made me concentrate on my career. If I could not give my best at the time I had maximum support then I have a problem.

So where are we going? The athletes are in different places now, they are scattered they don’t know their fate. Some are training with the limited resources that they have and you want the best from them within a month of preparation because they will probably end up calling them to camp four weeks to the time.

AA: What’s the way forward
DA: A lot of issues will have to be addressed before we can move forward. When we have square pegs in round holes. A lot of people at the helm of affairs do not know the right thing they should do and they are not ready to learn.

If we get it right, we can stun the world. Look at Jamaica when they entered the scene they took the world by surprise. When competitions are according to grade it would encourage the younger athletes to do well.