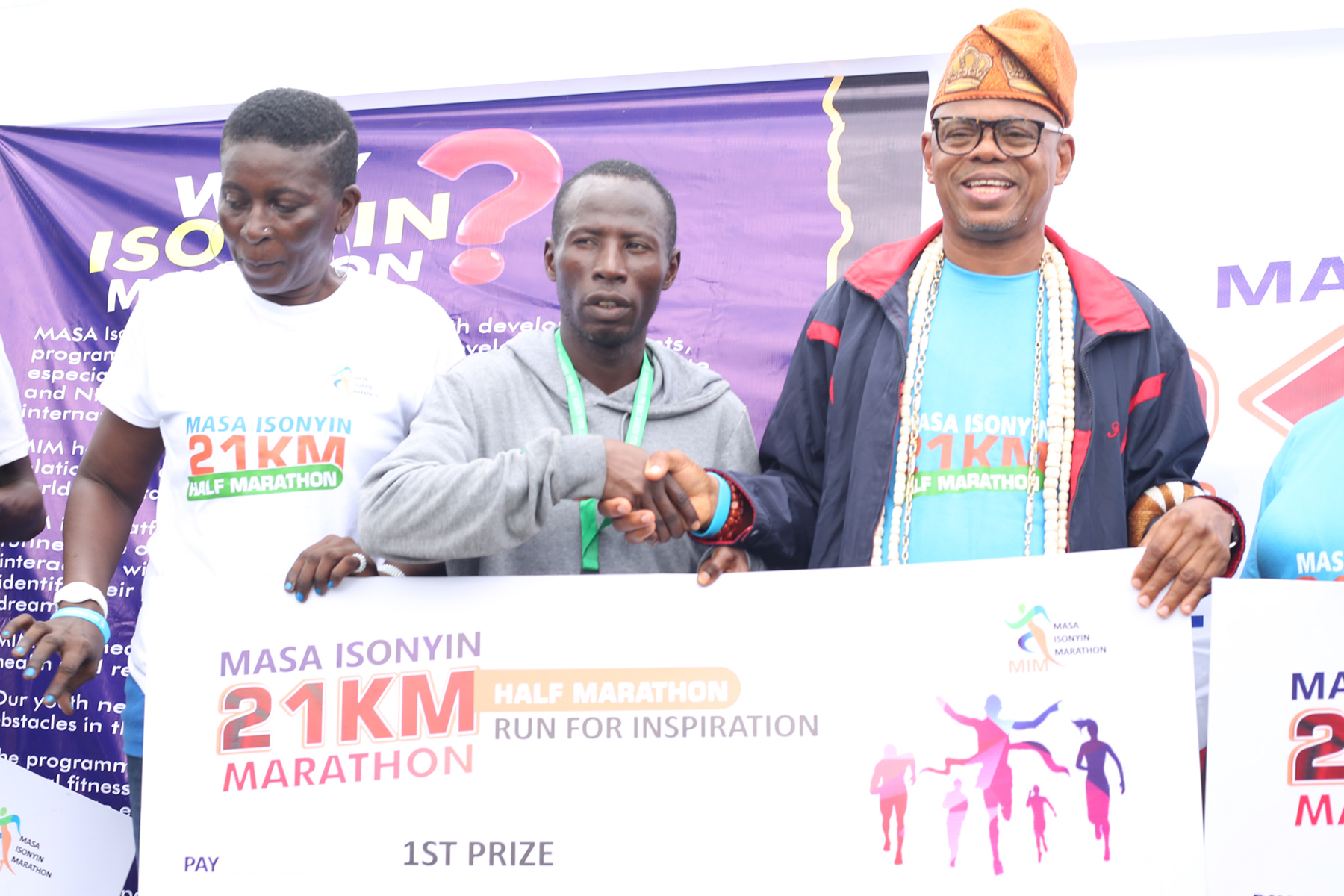 Plateau State-born runner Adamu Shehu Muazu ‘Shagari’ made history in the ancient town of Isonyin after he emerged the winner of the 1st edition of the MASA Isonyin Half Marathon on Saturday, April 16, 2022.

Shagari controlled the race from start to finish, clocking 1:10:52 to win the maiden edition of the race more than two minutes ahead of Kenya’s John Muiruri, who finished second with a time of 1:12:39.

Tosin Adedeji, who hails from the host Local Government, Ijebu-North East, finished in the third position with a time of 1:13:39.

In the women’s race, Hawawu Haruna breasted the tape ahead of her rivals, finishing with a time of 1:23:52.

Charity Agofure and Fadekemi Olude finished in the second and third positions in 1:24:29 and 1:30:39 respectively.

The new kid on the block, 11-year-old Abigael Ogunbowale also drew applause from the jubilant crowd with her sixth-place finish. Isonyin indigenes finished inside the top ten in both the men’s and women’s categories.

Speaking with reporters after his victory in Isonyin, Shagari said he was happy to add yet another first-place winning medal to his collection. For him, the presence of elite runners in Isonyin will be a morale booster for the homegrown runners.

Hawawu, who won in the women’s category, said she was delighted with her triumph, especially with the presence of other elite runners from across the country. She also appealed for more government intervention in the community; especially in fixing some of the deplorable roads.

The Oba of Isonyin, Oba Abdulrasheed Omotayo Salami, Ilufemiloye 1, said the coming of the marathon is unprecedented in the community and praised the organisers of the race for a job well done.

Aside from announcing Isonyin to the global sports world, the king believes this new race will bring a lot of development to Isonyin land and other adjourning communities.

Media Director and Event Manager, Yeye Adesola Salami, expressed gratitude to everyone who made the maiden MASA Isonyin Half Marathon a huge success; adding that the next edition will be bigger.

She said: “We are very happy with the success recorded in this first edition, we thank the Kabiyesi and everyone that supported this good course one way or the other.”

Over N750,000 as well as other consolation prizes were shared among the runners.