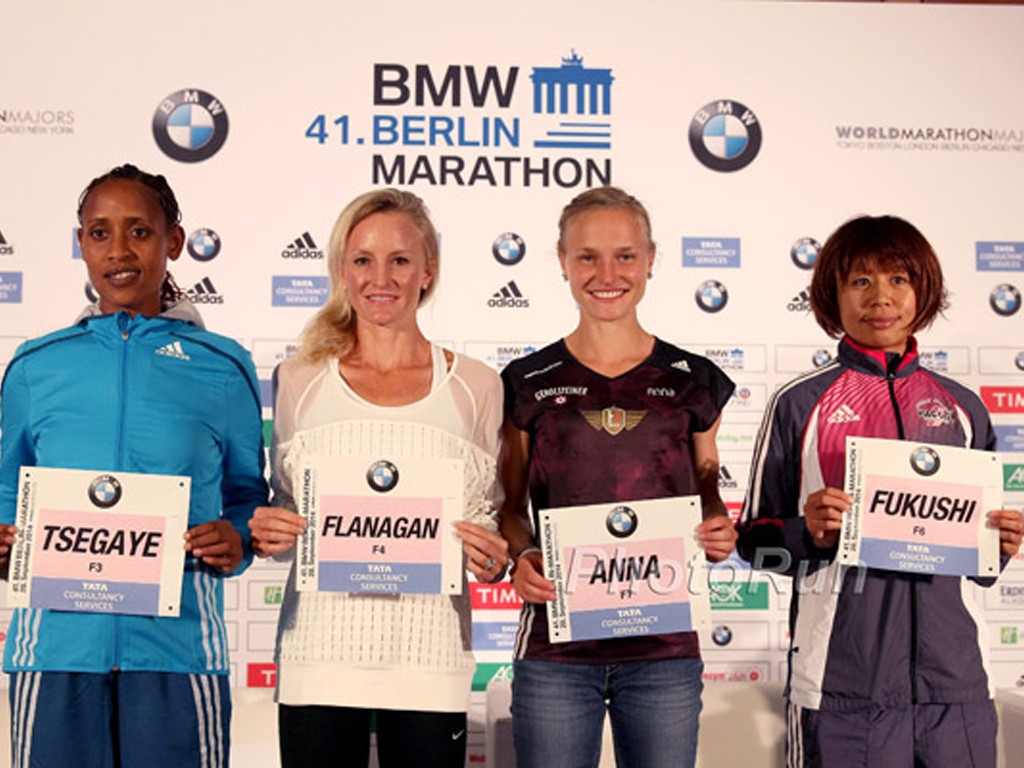 The Ethiopian duo of Tirfi Tsegaye and Feyse Tadese together with Shalane Flanagan of the USA hope to be knocking on the door of an exclusive distance running club when the 41st edition of the BMW Berlin-Marathon gets underway at 8.45 am on Sunday (September 28).

The trio aim to break the 2:20 barrier for the marathon, a landmark achieved by 18 women so far in history. Five have that distinction in Berlin with Kenya’s [link id=”429″ tax=”post_tag” text=”Florence Kiplagat”] the last to succeed in that attempt with her time of 2:19:44 in 2011.

The women’s course record of 2:19:12 has remained in the possession of Japan’s 2004 Olympic Marathon champion Mizuki Noguchi since 2005. The [link id=”296″ tax=”post_tag” text=”BMW Berlin-Marathon”] is an IAAF Gold Label Road Race and a World Marathon Majors (WMM) event.

[link id=”293″ tax=”post_tag” text=”Tirfi Tsegaye”] lives in Addis Ababa but hails from Oromia, one of the most fertile sources of Ethiopia running talent, including [link id=”220″ tax=”post_tag” text=”Kenenise Bekele”]. The winner of the Paris title two years ago, Dubai last year and Tokyo this February is very much aware of that heritage.

“I’m proud to come from Oromia and to have grown up in the capital of Arsi. I know all about our running tradition and want to represent that here on the streets of Berlin.”

To that effect she and training partner but rival on Sunday Feyse Tadese will be aiming to join the three Ethiopian women who are already members of the sub 2:20 club, headed by the 2012 Olympic champion [link id=”545″ tax=”post_tag” text=”Tiki Gelana”] with her 2:18:58.

[link id=”564″ tax=”post_tag” text=”Feyse Tadese”] will be the fastest woman in the field, thanks to her 2:21:06 to win the Paris title last year. Tirfi and Feyse will leave friendship behind once on the start line, but, according to the former, the subject was never raised in their Addis training base.

“We never discussed who might be strongest. Training is about helping each other, then comes the race on Sunday. I know my preparation has gone well and I feel I have a strong chance on improving my best of 2:21:19 when I finished second in Berlin two years ago.”

Shalane Flanagan arrived in Berlin last Friday (September 19) with her mission clear cut: breaking the US record of 2:19:36 set by Deena Kastor in London in 2006. That would be an improvement of 2:26 for the American record holder at 10,000m on the track.

She paid the price for a fast early pace in Boston in April, but set a personal best in her home town of 2:22:02 for seventh place. Paying attention to detail, such as course variations and using landmarks as guides, is part of her meticulous approach.

“Every athlete is different but I like to go over a course and get to know it. We’ve had a guide take us around, note where the corners are, where the crowds are biggest. I can use that, imagining that I can draw on their energy when it gets tough.”

Tough it will get, as Flanagan readily acknowledges. Contemplating a consistent pace of 5:19 per mile to break 2:20 is a daunting prospect, especially for the latter stages. Part of her motivation is a desire to create landmarks in what has been a distinguished career, highlighted so far by an Olympic bronze medal for 10,000m in 2008.

“I feel strongly that I want to run well in the marathon as part of a legacy, to show what I have done in my running career. Growing up in Boston, I would watch the marathon and wonder how the elite women could run so fast, since my mile time as a girl was slower than their mile splits for the entire race.”

The marathon could provide a surprise package in the shape of Ethiopia’s [link id=”416″ tax=”post_tag” text=”Tadelech Bekele”]. Already well known in Berlin, having won the city’s half marathon in late March. Her time of 70:05 didn’t make many headlines but what served notice of potential was her winning performance in the Berlin 10k last October.

Tadelech’s time of 30:38 was the seventh fastest in history. She ventures into the unknown for the marathon, but some solid building blocks are in place for a distinguished future.

All the contenders come to Berlin in search of speed, attracted by the course’s reputation for record-breaking at this time of year. Japan’s Kayuko Fukushi, a marathon bronze medallist at the 2013 World Championships, gave a succinct response to why she chose the German capital for an attempt on her personal best of 2:24:21 from runner-up spot in Osaka last year.

“I know the three Japanese women who have broken 2:20 here, Mizuki Noguchi, Naoko Takahashi and Yoko Shibui. They didn’t give me special tips, just said, it’s a fast course, enjoy the atmosphere and have a good trip.”

Sentiments which are likely to be shared by a little over 40,000 runners of all abilities and ages who will line up on the Avenue of June 17 in the heart Berlin’s Tiergarten park on Sunday morning.