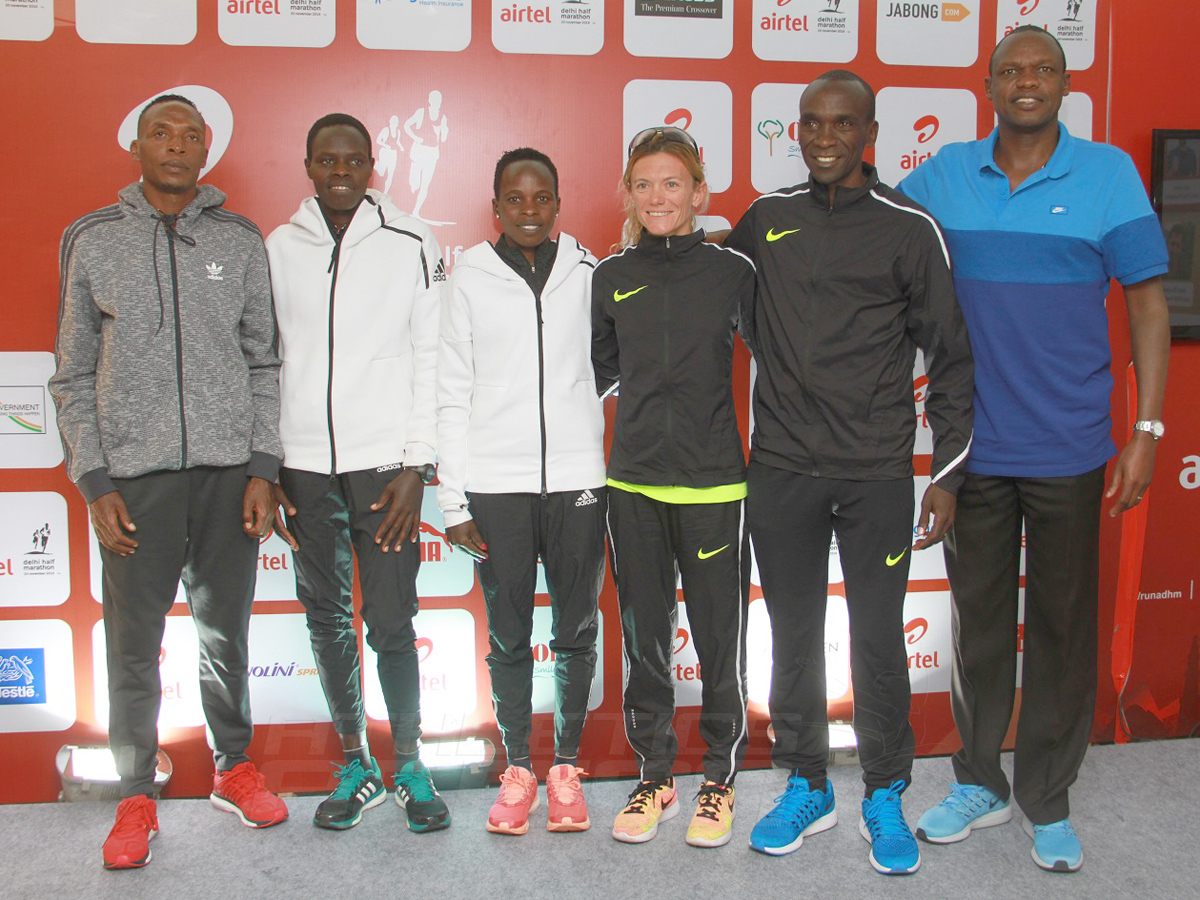 Kenya’s Eliud Kipchoge made a triumphant return to racing barely three months after taking the Rio 2016 Olympic Games marathon title when he won the 2016 Airtel Delhi Half Marathon in 59:44 on Sunday.

Kipchoge accelerated away from his last remaining challenger, Ethiopia’s Yigrem Demelash, with one kilometre to go and the 2012 world junior 10,000m champion came home four seconds in arrears.

The contest for the 12th edition of India’s leading half marathon race – and the US$27,000 first prize – was quickly just reduced to three contenders after just five kilometres, with Kipchoge and Demelash being accompanied by Kenya’s Augustine Choge.

Pacemakers John Langat and Ronald Kirui, both from Kenya, took the trio through the first 10km in 28:33, provoking hopes that with a slight quickening of pace in the second half of the race the Airtel Delhi Half Marathon course record of 59:06, set by Ethiopia’s Guye Adola in 2014, might fall.

However, 12km was reached in 34:16 as the pacemakers started to struggle. The leading trio were left out on their own and it was becoming clear that Adola’s record was likely to survive for another year.

Just after 17km, Choge was unable to stay with his two rivals and started to slip back while Kipchoge continued to force the pace.

In the final kilometre, Kipchoge found another gear but was clearly worried by the potential sprint finish of Demelash, who had also finished fourth in the Rio 10,000m and run under the hour for the half marathon earlier this year, repeatedly glancing back before crossing the line.

However, the experienced Kipchoge had planned his decisive move to perfection and completed a victorious return to Delhi after taking the 2010 Commonwealth Games 5000m silver medal in the same city six years ago.

“The running conditions were good, my training was good and with the right guidance from my coach (1992 Olympic Games 3000m steeplechase silver medallist Patrick Sang), I was able to win the race. Along the route the crowd was also cheering us and that helped to further motivate us,” said Kipchoge.

Demelash finished second in a personal best of 59:48 with Choge also improving his personal best when finishing third in 1:00:01.

Ethiopia’s Worknesh Degefa caused a slight surprise when she took the women’s title in 1:07:42.

Despite Degefa being the fastest woman in the field, all eyes were on the reigning world half marathon champion Peres Jepchirchir, who had won her previous four outings over the distance this year.

However, Delhi proved to be one race too many for the Kenyan who had said before the race that she had been suffering from blisters on her feet and a cold in the proceeding weeks.

Six runners, led by Degefa with her compatriot Ababel Yeshaneh and Jepchirchir running directly behind her, were still in contention up to 18 kilometres before Degefa pushed hard and spilt up the pack.

No one could stay with her and she crossed the line 10 seconds in front of Yeshaneh. The two Ethiopians were followed home by three Kenyans with Helah Kiprop taking third in 1:08:11, Gladys Chesir fourth in 1:08:23 and the tiring Jepchirchir fifth in 1:08:28.