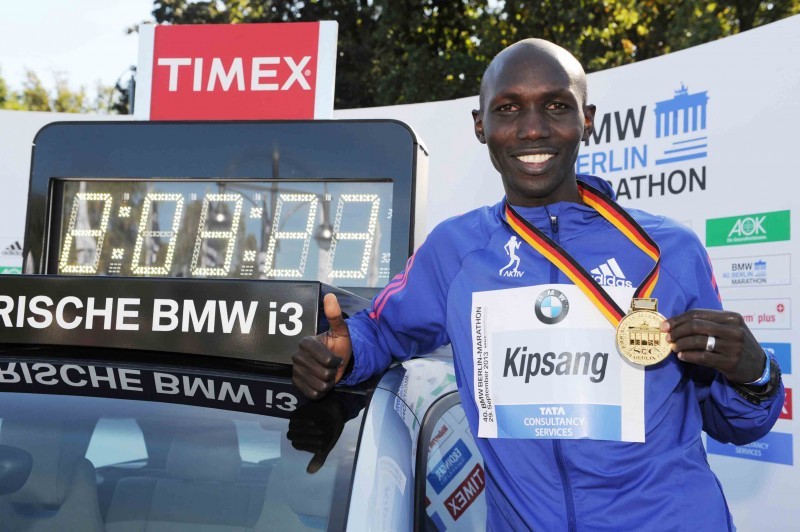 After spending two years being known as the man who came agonisingly close to matching the marathon world record, Wilson Kipsang of Kenya broke that record handsomely in Berlin on Sunday morning, clocking 2.03.23, thus taking 15 seconds off compatriot Patrick Makau’s 2.03.38, set in this same race two years ago.

In only his second marathon, former world 5000 metres track champion, Eliud Kipchoge finished second at the BMW Berlin-Marathon in 2.04.05, taking a minute off his debut best; and another Kenyan, Geoffrey Kipsang (no relation) was third in 2.06.26, also a personal best.

Barely a month after Makau’s world record in Berlin, Kipsang, 31 won the Frankfurt Marathon 2011 in 2.03.42. He went on to win the London Marathon 2012, but was relegated to third in the Olympic race in London three months later.

Now Kipsang is on top of the marathon mountain. And Berlin’s cachet of possessing the fastest marathon course in the world is again emphasized. This is the eighth world record on the course in 15 years.

‘Man for the job’

With four-time winner, and twice world record holder here, Haile Gebrselassie sending the field on its way on a bright sunny morning, with a brisk 8C ( 46F) at the start rising to 13C ( 55F) at the finish, the scene was set for another historic BMW Berlin-Marathon, the 40th in the series.

And Kipsang was just the man for the job. He kept a watching brief for around three-quarters of the race, content to stay at the back of a group of ten East Africans – mostly Kenyans, with a couple of Ethiopians – led by pacemakers, Edwin Kiptoo and Philemon Rono. The latter pair performed their task admirably, going through 10k in 29.16, and halfway in 61.32, some dozen seconds ahead of Makau’s pace (when he was duelling with Gebrselassie) two years ago.

Kipsang is one of the few Kenyans willing to venture a pre-race prediction of a world record. And since he had run within four seconds of the world record, that opinion was maybe not so rash. And although staying at the back of the group, he seemed to be in control of the whole show, choreographing the assault on Makau’s record himself.

Not only was he able to watch his principal rivals, Kipchoge and Geoffrey Kipsang closely, he had the reassurance of knowing that the pacemakers were part of his own training group.

He gave them their head until the wind rose and the pace began to drop after 30k, when Kiptoo dropped out, and two lesser known Kenyans, debutant Wilson Kirwa and Victor Kipchirchir dropped back. And when Rono dropped out at 35k, with the trio of favourites 20 seconds adrift of Makau’s time, Kipsang responded immediately.

He strode to the front, and raised the pace; and from then on, the writing was on the road, both for Makau and for Geoffrey Kipsang and Kipchoge, who were already struggling to keep pace. They managed it for another km, and first Geoffrey Kipsang then Kipchoge drifted back.

Kipchoge rallied briefly at 38k, by which time Kipsang was back ahead of Makau’s pace. But the relative experience of the two men then showed, as Kipsang eased into a winning lead, and concentrated on the record.

It was touch and go for the next two kilometres – one second ahead, then one behind Makau – but a final onslaught from Kipsang, running the stretch from 40k to the end, ie 2.195k in 6min 11 sec, took him well under the previous record.

Kipsang said, “This is a dream come true. Ten years ago, I watched Paul Tergat break the world record in Berlin, and now I have achieved the dream. I felt strong, so I attacked at 35k, because the pace had become a little too slow“.

With so many world record holders here for the 40th anniversary race – Christa Vahlensiek, Tegla Loroupe, Naoko Takahashi (who ran 3.25 today), Geb, Tergat, Ronaldo da Costa, and Makau – it is tempting to wonder who might be the tenth world record breaker here.

Kipchoge suggested himself, saying, „I felt strong, even though I was running much faster than in my debut in spring. I’ve now run 2.04, so I think one day I could train to run the world record”.

There was another Kenyan duel, virtually throughout the whole of the women’s race. But despite some foot problems, Florence Kiplagat prevailed over colleague, Sharon Cherop, and retrieved the Berlin title she won two years ago. Kiplagat won in 2.21.13, easing well ahead in the final stages, with Cherop second in 2.22.38.

Kiplagat said, ”I felt strong in the first half of the race, but then I started getting problems with my right foot, I had a blister which forced me to slow down. I found the weather conditions harder than two years ago here, but I’m still very happy”.

Mikitenko said, I’m very happy to have broken the masters’ world record, but I’m quite sure I can run faster, and improve the record further. There were some problems because of the wind, but I’m very happy”.

But the last word belongs to Kipsang. “Looking at my marathon progress and career so far, I still think I have the potential to run faster. Anything under 2.03.23 would do.