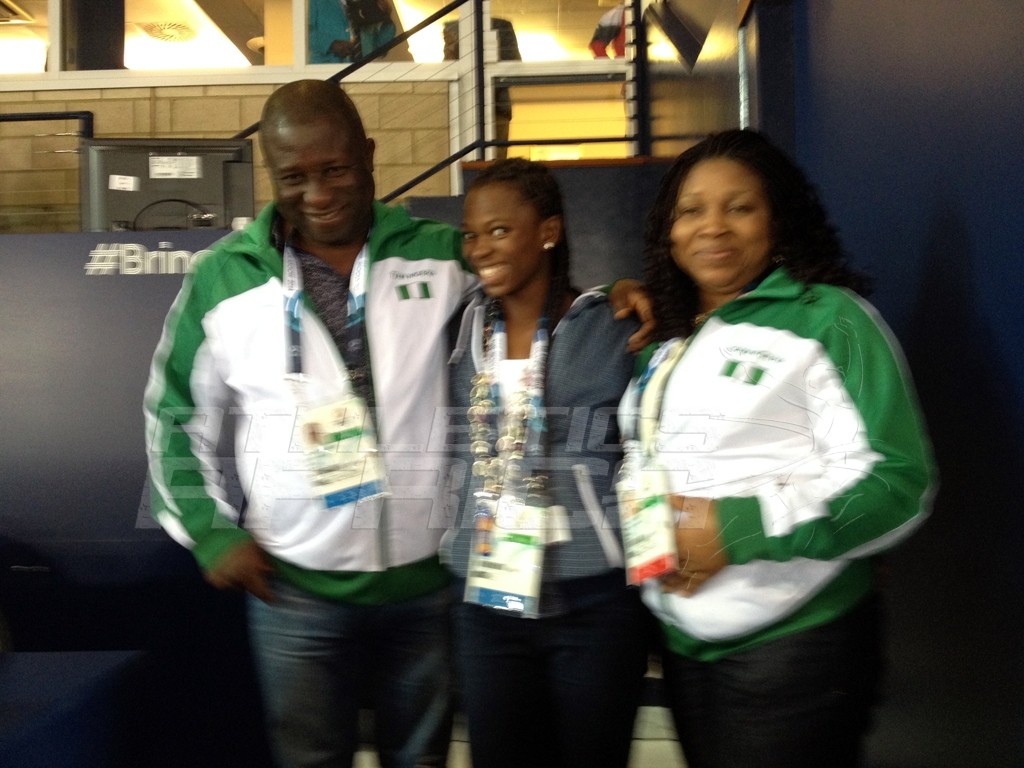 In an informal chat with AthleticsAfrica at the Hampden Park on Saturday, Elegbeleye, who is also Nigeria’s Chef de Mission to [link id=”286″ tax=”post_tag” text=”Glasgow 2014″] Commonwealth Games, expressed satisfaction with the performance of the team that finished seventh on the Athletics medals table with a total of seven medals (3 gold medals, 3 silver medals and 1 bronze medal).

He was pleased with the performance of the women’s team, especially that of the double gold medallist [link id=”158″ tax=”post_tag” text=”Blessing Okagbare”] and the youngsters who came down from the World Juniors and performed creditably well in Glasgow. He said the development bodes well for the country’s chances at the 2016 Olympics in Rio, Brazil.

Elegbeleye was confident that the success of the junior athletes will motivate and improve the Nigeria athletics team chances at the [link id=”369″ tax=”post_tag” text=”Youth Olympic Games in Nanjing”], China later this month.

He was particularly elated at the performances of [link id=”502″ tax=”post_tag” text=”Ese Brume”], who won the women’s long jump gold medal with a distance of 6.56m; Divine Oduduru, who participated in the men’s 4x100m; and Indiana University alum Olumide Olamigoke, who narrowly missed out on a medal by 0.07 metres in the men’s triple jump, jumping 16.56m to finish in 4th position.

The 18-year-old Brume, who flew down to Glasgow after a woeful performance at the [link id=”434″ tax=”post_tag” text=”World Juniors in Eugene”], Oregon – where she failed to qualify for the final with a best jump of 5.18m, justified the AFN’s decision to rest Okagbare for the 200m final by claiming the long jump gold for Nigeria.

However, he was disappointed with the overall performance of the men’s team especially after they lost a chance to win a medal in the 4x100m relay as a result of a poor baton exchange. Only the reigning Africa champion [link id=”166″ tax=”post_tag” text=”Tosin Oke”] won a medal (Silver) in Glasgow, with 24-year-old Richard Okigbazi claiming a bronze medal in Para-Sport men’s Discus throw F42/44.

“The team was in a very good position for a medal. We lost the chance [to win a medal] as a result of that poor exchange of baton,” he said.