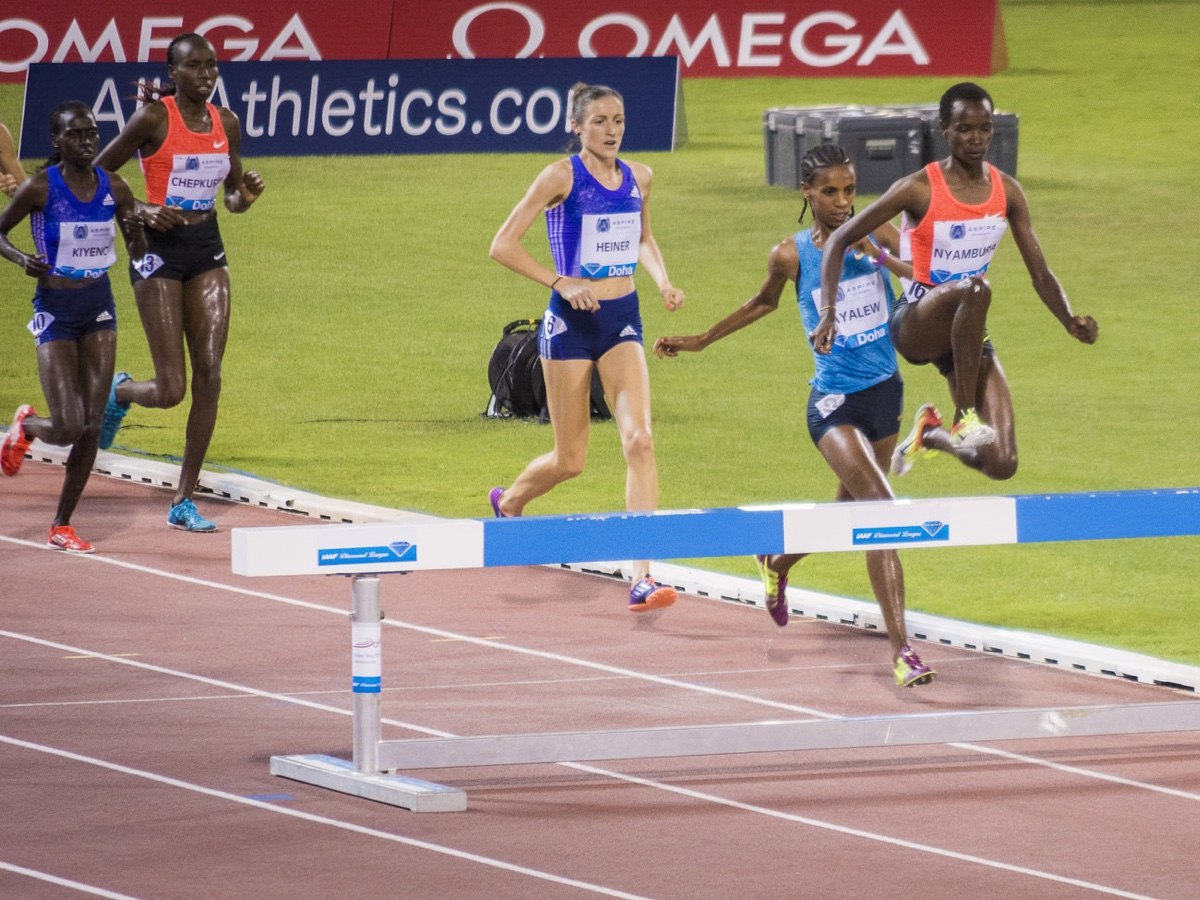 Amidst one of the finest early season displays of speed ever witnessed, Pedro Pablo Pichardo and Christian Taylor produced the best triple jump competition in history at the opening meeting of the 2015 IAAF Diamond League on Friday night.

And the 21-year-old Cuban needed every centimetre to better Olympic champion Christian Taylor who responded with an 18.04 jump with his final effort.

Only five men have now sailed beyond 18 metres and never have two done it the same competition.

“It was a fantastic competition for me,” said Pichardo, who set his previous best of 17.94m in Havana last weekend.

“It is a special day for me,” said Taylor, who improved his personal record eight centimetres.

Pichardo’s performance was just one of 11 world season leading performances and five meeting records to fall at the Qatar Sports Club in what will remembered as one of the best Diamond League competitions in the series that kicked off its sixth season in Doha.

Gatlin, Stowers move up all-time lists
In the men’s 100m, Justin Gatlin continued his comeback with a dominant display as he powered to a 9.74 victory.

Midway through the race there was little doubt that the 2004 Olympic champion, now 33, would extend his win streak in the event to sixteen.

Summarizing much of the evening’s action on the track, Gatlin said, “It was a magical night.”

His performance, a meeting record, elevated him to the No. Five position all-time and was also Diamond League record*.

Michael Rodgers of the U.S. was second in 9.96 with Keston Bledman of Trinidad and Tobago third in 10.01.

In the women’s 100m hurdles Jasmin Stowers continued her rapid rise through the ranks of the event with her dominating victory in 12.35, a sensational world-leading mark that moved the 23-year-old to the No. 7 position all-time. Notably, nobody has ever run so fast so early in the season.

“It’s been a sensational start to the season,” said Stowers, who entered the year as an unknown with a career best of 12.71. “It means a lot competing with such great women and athletes.” Her mark was also a meeting and Diamond League record.

Just a few minutes earlier Allyson Felix brought the crowd to their feet with a sterling run in the 200m, a 21.98 dash that was also a world lead and Doha meeting record.

The Olympic champion had already built a clear led midway through the bend before her trademark smooth, confident cadence down the homestretch carried her through the line.

“It’s a good start, I felt strong and my speed is good,” said Felix, who notched her 11th victory on the Doha stadium track. “It’s so good to be healthy.” Her performance was the fastest ever in the month of May.

The first world lead on the track came courtesy of Bershawn Jackson who just five hours earlier was complaining about how little sleep he’d gotten since arriving in the Qatari capital.  That drowsiness showed early on in the race, but the veteran shook it off quickly.

“What was important today was to have a great race and not the time, but I am glad I broke the meeting record,” said Jackson, the 2005 world champion, whose 48.09 world lead was also a meeting record.

“People doubted me last year but it was injury problems that pulled me back. I proved I can still run fast.”

After a decent start, Jackson faded to fifth 200 metres into the race, only to shift gears midway through the final turn.

Powering down the homestraight, the only remaining battle was between him and the [link id=”142″ tax=”post_tag” text=”LJ van Zyl”]’s meeting record.

Jackson won that one as well as he clipped .03 seconds from the South African’s mark as he crossed the line with his second Doha victory.

Javier Culson of Puerto Rico was a distant second in 48.96, just a scant 0.03 ahead of Irishman Thomas Barr. Further back, Jack Green (49.31) of Great Britain was fourth.

Minutes later, world leads would fall in the both the women’s 1500m and men’s 800 with pre-race favourites falling to upset upstarts.

In the women’s race, it was 18-year-old [link id=”663″ tax=”post_tag” text=”Dawit Seyaum”] of Ethiopia, last year’s world junior champion, who spoiled the latest round of the Sifan Hassan-Abebe Aregawi rivalry.

With Aregawi well out of contention, the Dutchwoman Hassan seemed in control as she passed the bell about two strides ahead of Seyaum, and brought a steady metre-and-half-lead into the backstretch, one she padded as she made her way around the final bend. But the teenager wouldn’t relent.

On her heels from the top of the homestretch, Seyaum moved to the front with about 40m to go, allowed a smile onto her face about 15m from the finish, and fell to the track just beyond the line. But she was still smiling.

Instead, it became a strong platform for [link id=”248″ tax=”post_tag” text=”Ayanleh Souleiman”], the world indoor champion in the 1500m, to shine over a shorter distance.

“I started the season again with a loss, but it doesn’t matter that much to lose in an opening meeting of the Diamond League. I tried for a late kick in the final 200 metre but it just wasn’t there.”

It wasn’t for lack of trying. Farah held back for much of the race’s first half before moving to the front with three laps to go.

But he fell back quickly as the pack switched gears at the bell. With a half lap to go, Farah was well back in fourth, but found his own closing gear down the homestretch when he ran down everyone but Hagos.

In the women’s steeplechase, Virginia Nyambura of Kenya decided that her pace-setting duties weren’t quite enough, so she continued running and went on to win the event in a thrilling sprint finish over Hiwot Ayalew 9:21.51 to 9:21.54, another world lead.

World leads for Bartoletta and Pitkamaki

Tianna Bartoletta won a classy long jump competition in which the top four competitors were separated by just seven centimetres.

The 2005 world champion set the tone and the controlled the competition with a 6.96 leap in the first round, one she improved to 6.99 in the last, the first season’s world lead of the evening.

Shara Proctor took advantage of early evening’s steamy conditions to fly out to 6.95 to equal the British national record she set at the 2012 Olympic trials.

Canadian rising star Cristabel Nettey was third with a 6.93 best, just one centimetre better than another Briton, Lorraine Ugen.

Another world lead on the infield came courtesy of Tero Pitkamaki in the men’s javelin throw. The former world champion underscored his comeback with an 88.62 throw in the final round.

His Finnish compatriot Anti Ruuskanen was second with 86.61.

Elsewhere Sandra Perkovic got her chase for a fourth successive Diamond Race title off to a strong start with a dominating win in the women’s discus throw.

The 24-year-old Croat, the reigning Olympic and world champion, topped the leader board with a 68.10 best, although each of her four measured throws would have sufficed for the victory.

Germany’s Nadine Muller was a distant second with 65.13 with Australian Dani Samuels, a former world champion, third at 64.45.

Likewise in the men’s shot put, where two-time defending world champion David Storl made his season’s debut an auspicious one with his own convincing victory.

The 24-year-old German took control of the competition for good with a 21.51m put in the second round, an effort that held for the lead through the six rounds.

At age 37, four-time Doha winner Reese Hoffa of the U.S. produced a solid 21.30 effort in the third round to finish second, comfortably ahead of meeting record holder Ryan Whiting, who reached 21.06.

World leader Joe Kovacs (20.86) never found his rhythm and was a distant fourth.

Meeting record holder Konstantinos Filippidis of Greece won the pole vault with a 5.75m season best, ahead of Germany’s Carlo Paech and Argentine German Chiaraviglio, who each topped 5.60m.

Francena McCorory pulled off an upset in the women’s 400m defeating Olympic champion Sanya Richards-Ross decisively in 50.21. Richards-Ross, the world leader coming in to Doha, was a distant second in 50.79.

And finally, Abdalleleh Haroun impressed with a dominant win in the men’s Asian division 400m contest, producing a victory for Qatar early in the programme. The 18-year-old clocked 44.85 to win by more than a second.