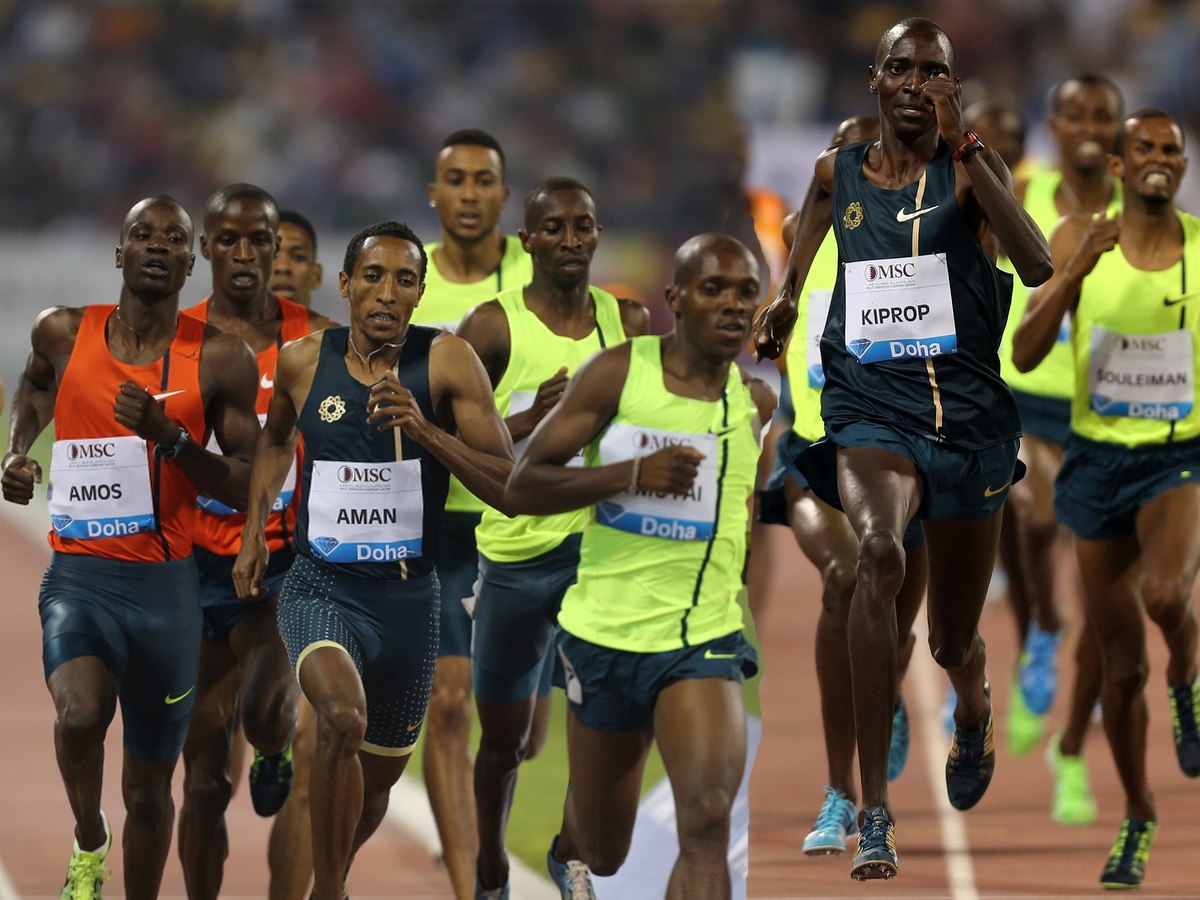 Reigning world champions Asbel Kiprop and Mohammed Aman will meet in a scintillating 800m clash on the Qatar Sports Club track at the Doha 2015 meeting on Friday 15 May, organisers have announced.

The trio are among the latest group of reigning Olympic or world champions who will kick-off their IAAF Diamond League 2015 campaigns at the opening competition of the 14-meeting series which gets underway for the sixth straight year in the Qatari capital.

Both Kiprop and Aman are familiar faces in the State of Qatar.

Kenyan Kiprop has won both the 800m and 1500m in Doha, the former in 2011 and the latter at the meeting’s last two editions. His 3:29.18 performance last year was a meeting record which paved the way to his second straight world title over the distance.

“The fields are always strong and the conditions always very good for fast races. I hope to have another good performance this year. But it will be tough.”

Aman, who’ll have the vociferous support of Ethiopian fans who come out in force each year behind him, is the reigning world 800m champion both indoors and outdoors, and won over the distance in Doha last year in a non-scoring race. The 21-year-old has a 1:42.37 career best to his name from 2013.

The field will also include Nijel Amos of Botswana, the 2012 Olympic silver medallist and last year’s Diamond Race winner in the event. Amos is the fifth fastest man in history courtesy of his 1:41.73 run from London.

Even more familiar with Doha’s inviting early season conditions is Felix, the reigning Olympic 200m champion who’ll be gunning for her third victory on the Doha track in her specialty distance.

“Starting my season in Doha is really a tradition for me, and I’m really looking forward to returning,” said Felix, whose ten victories in Doha include three in the 100m, two in the 200m and five straight in the 400m from 2007 to 2011.

“I love running in Doha where we know the conditions will be just about perfect and the competition excellent.”

Felix suffered a hamstring injury at the 2013 World Championships but bounced back by the end of 2014 with an impressive 22.02 victory at the Brussels leg of the Diamond League, the fastest performance in the world since her victory at the 2012 Olympic Games.

The three-time 200m world champion, 2012 IAAF Athlete of the Year and two-time Diamond Race winner will face Murielle Ahoure of Cote D’Ivoire, who impressed with a pair of silver medal finishes in the 100m and 200m at the 2013 World Championships.

They’ll be joined by rising UK star Jodie Williams who took the 100m world youth and junior 100m titles in 2009 and 2010, respectively.

The women’s 1500m won’t be bereft of star power where one of the sport’s finest rivalries will continue. Leading the field will be Swede Abebe Aregawi, the reigning world indoor and outdoor champion over the distance, who won the Diamond Race in the event in 2012 and 2013.

She’ll take on Sifan Hassan of The Netherlands, who like Aregawi, was born in Ethiopia. 2014 proved to be a stellar season for Hassan who won the Continental Cup, the European title defeating Aregawi, and was at 3:57.00, the fastest in the world.

The pair have met nine times over the distance with Hassan bringing a narrow 5-4 edge into Doha.

Defending Kenyan pride will be Faith Chepngetich Kipyegon, the 2011 world youth and 2012 world junior champion, who clocked a sensational 3:56.98 personal best in Doha in 2013 behind Aregawi.

“These latest names show our commitment to bringing not only the best athletes to Doha, but to providing top class rivalries and competition as well,” said Mr. Dahlan Al Hamad, President of the Qatar Athletics Federation.

“We know that the athletics world will be looking forward to the great men’s 800m race and Abebe Aregawi and Sifan Hassan once meeting in the 1500m.

“And of course, we’re always delighted to invite back Allyson Felix, who has thrilled, competed and won here already so many times,” Al Hamad added.