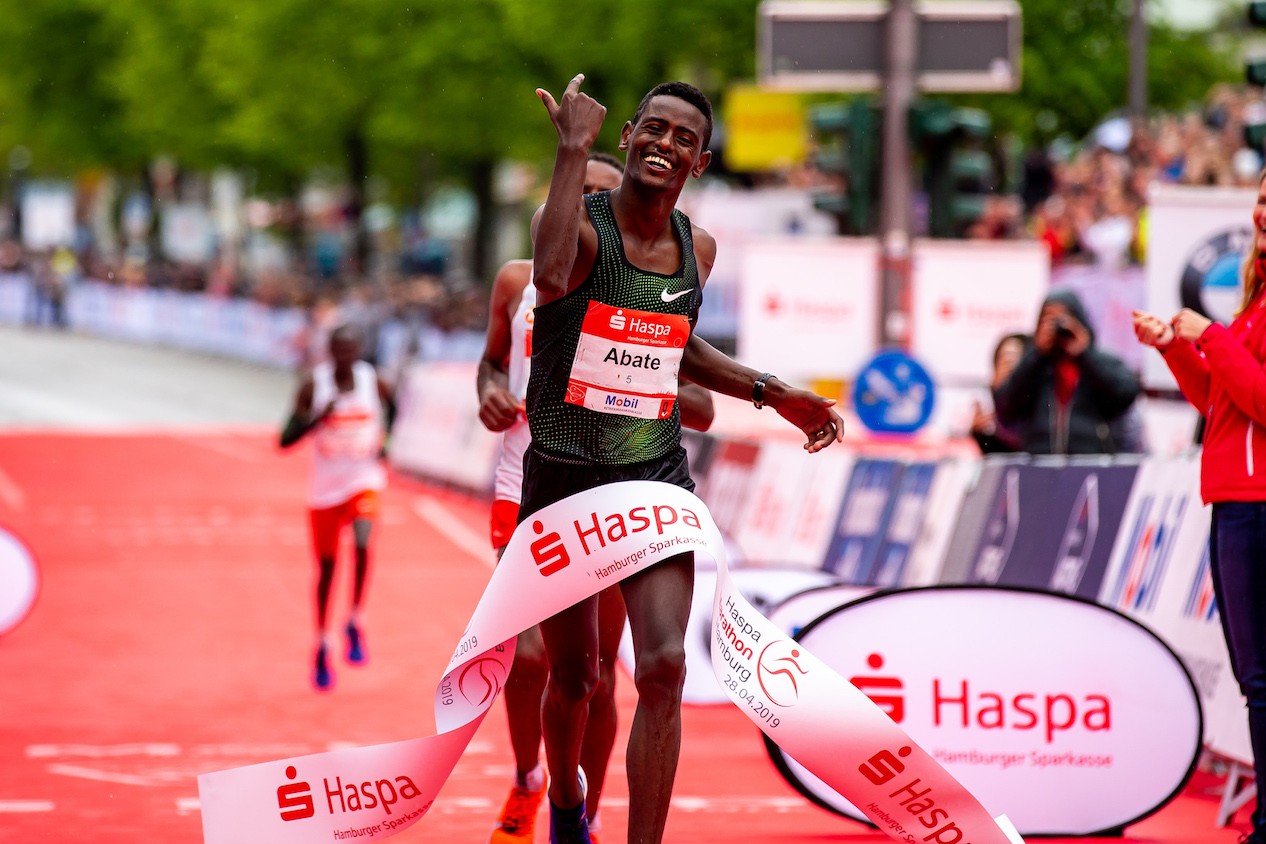 His fellow-Ethiopian crossed the line just one second behind while Uganda’s 2012 Olympic Marathon Champion Stephen Kiprotich was third in 2:08:31.

It was the fourth time in a row that an Ethiopian runner triumphed in the men’s race in Hamburg. Never before were the top three in Hamburg separated by just six seconds.

In contrast to the men, Dibabe Kuma ran away from her rivals soon after halfway. Although slowing in the second half the Ethiopian clocked the sixth fastest time ever run in Hamburg of 2:24:41 despite wet and cold weather.

Kenya’s Magdalyne Masai was second with 2:26:02 while Failuna Matanga of Tanzania finished third in 2:27:55.

A total of 35,000 entries were registered by organisers for the 34th edition of the Haspa Marathon Hamburg. This includes races at shorter distances. Around 14,000 ran the classic distance in Germany’s biggest spring marathon.

In tough conditions with more rain than had been forecasted the race never really developed a steady rhythm, as shown by the early kilometre splits ranging from 2:55 and 3:05 per k. A group 20-strong went through 15k in 44:53 which pointed to a finishing time of just over 2:06.

But by then one of the top names had surprisingly dropped off the pace. Abel Kirui, twice a World champion, was finding the pace too tough and fell away from the leading group before 15k.

The Kenyan had announced before the race that his goal was to break Eliud Kipchoge’s course record in Hamburg: 2:05:30 set in 2013. Those brave words came to naught as Kirui dropped out before 20k.

Another Kenyan star didn’t have the marathon debut he had been hoping for: the double Olympic steeplechase champion Ezekiel Kemboi dropped off the pace shortly before halfway which the big leading group reached in 63:29.

Although Kemboi struggled he did finish but his time of 2:17:39 for 30th place can hardly have met his expectations.

The wet and cold conditions ensured that times under 2:07 were hardly likely but the race turned into an exciting contest with nine runners in the leading pack at 30 kilometres.

This was reduced to five at 35k but the Ethiopian Jiksa Tolosa and Kenya’s Jonathan Korir dropped off the pace soon after. That left the Ethiopians Abate and Abshero, the latter third a year ago, and Kiprotich to contest the title.

Three times the Ethiopians seemed to have dropped the 2012 Olympic champion behind only for Stephen Kiprotich to get back into contention. He only succumbed with 400 metres remaining as Abate and Abshero surged once again with the 21-year-old Abate winning by a tight margin.

“I am naturally delighted to win a marathon for the first time. I had to adapt to the conditions because the weather has been very different for the past few days. But the rain wasn’t a problem for me. Ayele and I helped each other,” said Tadu Abate.

With 14 runners clocking sub 2:12 times the race had a very good depth. 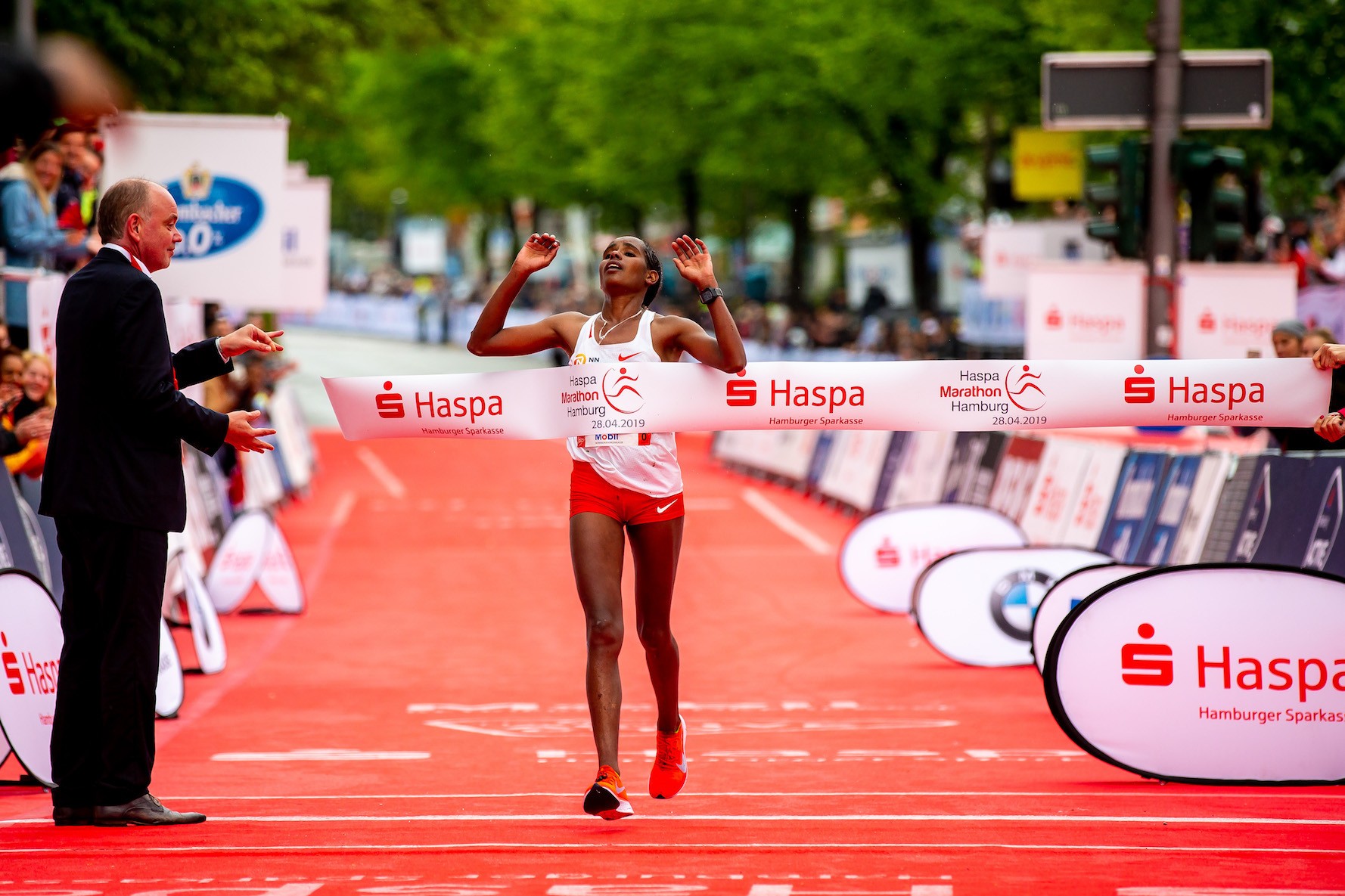 The women’s race produced a very different story. Dibabe Kuma went to the front at the start and stayed there, despite being pursued by the Kenyans Veronica Nyaruai and Jackline Chepngeno.

After a cautious start the pace increased markedly with halfway reached in 71:25, pointing to a finishing time under 2:23. Soon after the Kenyan duo couldn’t maintain the pace set by Kuma who led by 32 seconds at 25k.

The 22-year-old Ethiopian continued to extend her lead, going 1:19 clear by 30k. All this was without the support of pacemakers who, like many others, found the wet and chilly conditions caused muscle problems.

Even Dibabe Kuma slowed in the last ten kilometres but her finishing time of 2:24:42 was still a creditable performance given the conditions.

“I am so happy to have won this marathon. The course is very good,” said Kuma, whose personal
best remains the 2:23:34 she ran in Ljubljana last year.

Runner-up and third place remained in doubt right through to the closing stages.

Magdalyne Masai of Kenya, who finished in 2:26:02, and the Tanzanian Failuna Matanga, who took third in 2:27:55, moved up from fifth and sixth places at halfway to finish on the podium.

In contrast the day turned into disappointment for Jessica Augusto. The Portuguese had won the Haspa Marathon Hamburg title in 2017 but dropped out because of muscle problems at 27k.