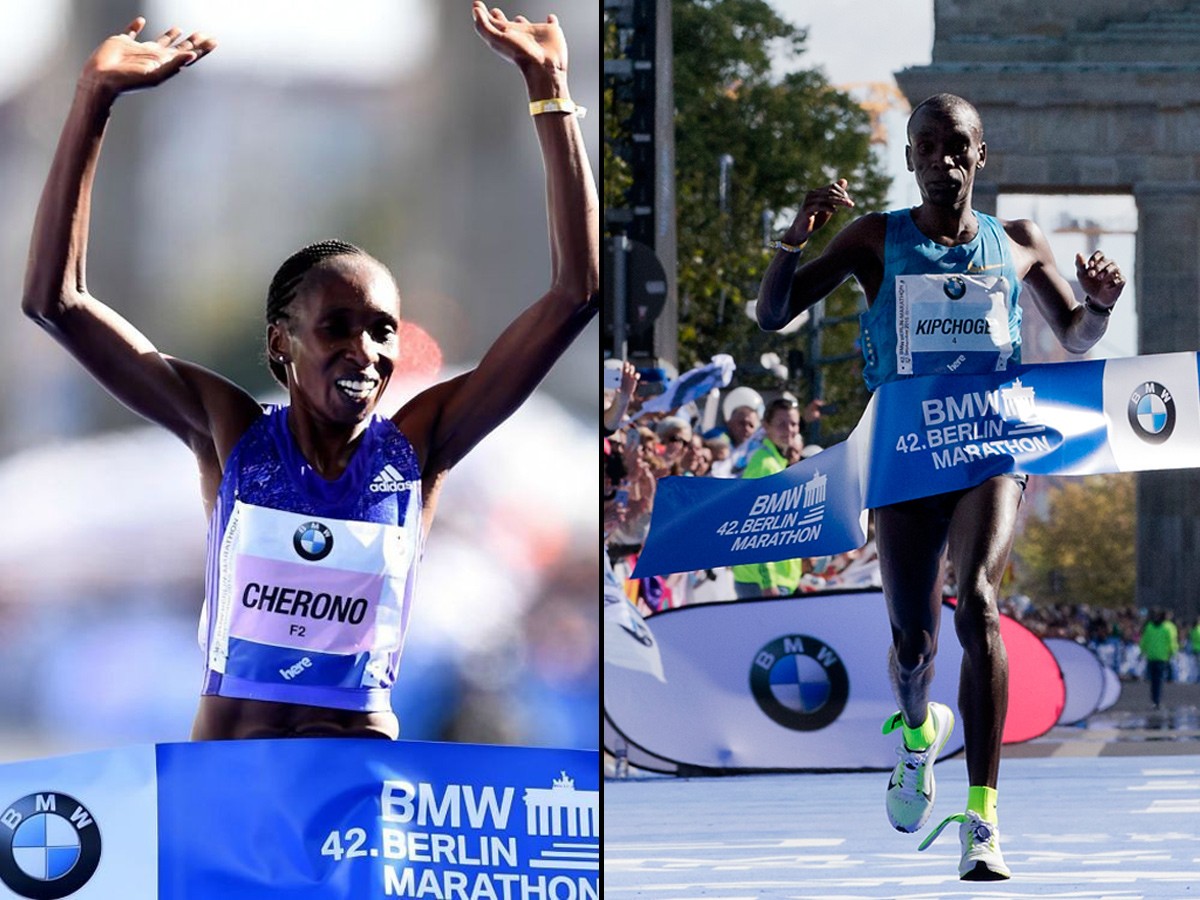 Eliud Kipchoge with his insoles flapping about and Gladys Cherono - men's and women's race winners at the 42nd BMW Berlin Marathon.

A Kenyan double in a major marathon is hardly unusual but there was a majestic quality about the manner of victory for both Eliud Kipchoge and Gladys Cherono on the streets of Berlin in the 42nd edition of the BMW Berlin-Marathon.

He achieved this while both his insoles were flapping about, half out of his shoes, from kilometre 16, although the runner himself admitted he had been aware of a problem within the first kilometre.

His fellow Kenyan Eliud Kiptanui achieved a big lifetime best for second place with 2:05:22 ahead of the Ethiopian Feyisa Lelisa, who clocked 2:06:57.

[link id=”347″ tax=”post_tag” text=”Gladys Cherono” target=”_blank”] smashed the 2:20 barrier in only her second marathon, joining the exclusive club of now 18 women who have achieved this distinction.

Taking into account both winning times, this edition of the BMW Berlin-Marathon achieved seventh place in the all-time marathon list for quality of performance.

A grand total of 41,224 runners lined up on the start line at 9 o’clock on Sunday morning for this latest edition in the Abbott World Marathon Majors series which is also an IAAF Gold Label event, the highest category of road race.

As the pacemakers went about their work in the early stages, the main talking point was the state of Eliud Kipchoge’s shoes: the bright yellow footwear had acquired a distinctive and unwanted accessory: both insoles had worked their way out of the shoes and were flapping around his ankles with every step.

“It wasn’t a good day for me in these shoes, although they’re actually very good. I tested them in Kenya but just had bad luck on the day. I had problems from the first kilometre,” explained [link id=”297″ tax=”post_tag” text=”Eliud Kipchoge”], who may well have threatened the world and course record of [link id=”566″ tax=”post_tag” text=”Dennis Kimetto”] from last year but for this.

An attack on the world record began to look out of reach when the lead group went through halfway in 61:53 since the plan had been for a split of 61:30.

Despite his handicap, [link id=”297″ tax=”post_tag” text=”Eliud Kipchoge”] pushed the pace after David Kogei, the last pacemaker, dropped out at 29 km.

Kipchoge’s surge split the leading group and set up the decisive move when he ran 2:48 for the 32nd kilometre. That took him well clear of his training partner [link id=”425″ tax=”post_tag” text=”Emmanuel Mutai”].

The latter was then overtaken by Eliud Kiptanui and Feyisa Lelisa and finished fourth in 2:07:46.

“My goal was the world record but it wasn’t to be today. Nevertheless I’m delighted with this win and a personal best. I would love to return to Berlin and improve my time,” said Eliud Kipchoge, who finished second in the [link id=”296″ tax=”post_tag” text=”BMW Berlin-Marathon”] two years ago in what remained his personal best of 2:04:05 until today.

The improvement of five seconds took him to ninth on the all-time rankings for the fastest marathons.

Gladys Cherono Kiprono was always to the fore among a quartet who formed the women’s leading group.

The race had become a duel before 20 km as Cherono and Kebede drew clear. After a halfway split of 70:15, Cherono increased the pace with 10 km to run and broke away from her Ethiopian rival. That injection of pace also helped her go under 2:20.

[link id=”347″ tax=”post_tag” text=”Gladys Cherono”] ran through the Brandenburg Gate and across the finish line in 2:19:25, the third fastest time ever run by a woman in Berlin and just 13 seconds slower than the course record set by Japan’s Mizuki Noguchi ten years ago.

“I didn’t expect to run so fast and am delighted to win and the way I did it,” said the Kenyan, who achieved the fastest women’s marathon time since April 2012.