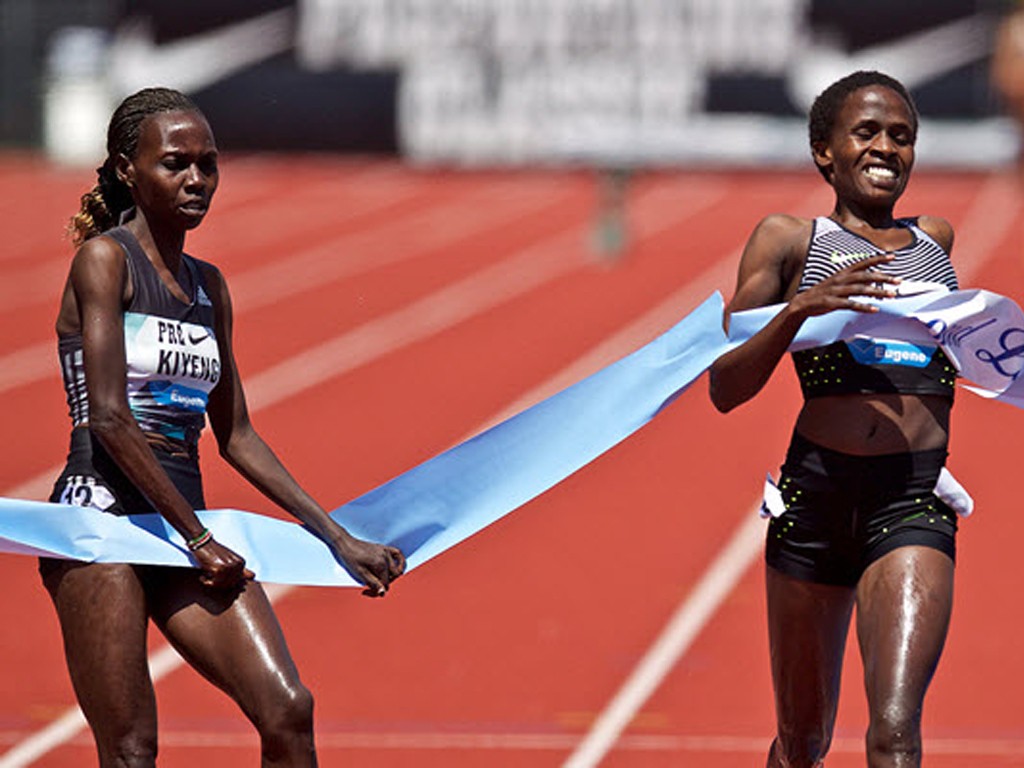 Ruth Chebet and Hyvin Kiyeng missed the existing record by only one second in Eugene / Photo credit: IAAF Diamond League

Bahrain’s Ruth Chebet and Kenya’s Hyvin Kiyeng played the leading roles as they both missed the existing record by only one second last Saturday. But on 16 June there could be a fourth world steeplechase records at BAUHAUS-galan – Stockholm’s Olympic Stadium.

Chebet, the Kenyan teenager who started to compete for Bahrain three years ago, became the second woman to break the nine-minute barrier after clearing the 28 barriers that make up the 3000 metres steeplechase.

But World champion Hyvin Kiyeng Jepkemoi was only four hundredths of a second behind her, closing a big gap over the last 150 metres at the Prefontaine Classic in Eugene.

That was a great breakthrough for the reigning World junior champion who qualified for the Beijing 2015 World Championships final last year at age 18.

She started the season with a 9:21-PB that she lowered to an Asian Record 9:15.98 by winning the Shanghai Golden Grand Prix in mid-May. The new continental record stands at 8:59.97.

Kiyeng Jepkemoi grabbed the world title in Beijing last summer in a thrilling finish with four women in less than a second.

In Stockholm she will be pushed by a great field. Olympic silver medallist, Sofia Assefa, of Ethiopia, is unique with four straight World Championships finals.

Kenyan, Virginia Nyambura, secured the Diamond Race last year after wins in Doha, Birmingham and Lausanne as well as podiums in Rome and Monaco.

Chebet et al have a challenging Stadium Record to chase, 9:10.36, set by Habiba Ghribi in 2012. A successful attempt would be rewarded with the 72th diamond in the history of international athletics’ meets in Stockholm.

The 1912 Olympic Stadium has hosted a steeple World Record over three consecutive decades.

He did that in 1975, six days after his first World Record and one year ahead of his Olympic Gold in Montreal, the most recent gold by a Swedish male runner.

Peter Koech recorded the first electronically timed World Record in the event in 1989 when he posted 8:05.35 in Stockholm.

Home fans will enjoy the close battle between European silver medallist, Charlotta Fougberg, who lives in Sweden’s second city, Gothenburg, and Finland’s Sandra Eriksson who is based in Stockholm.