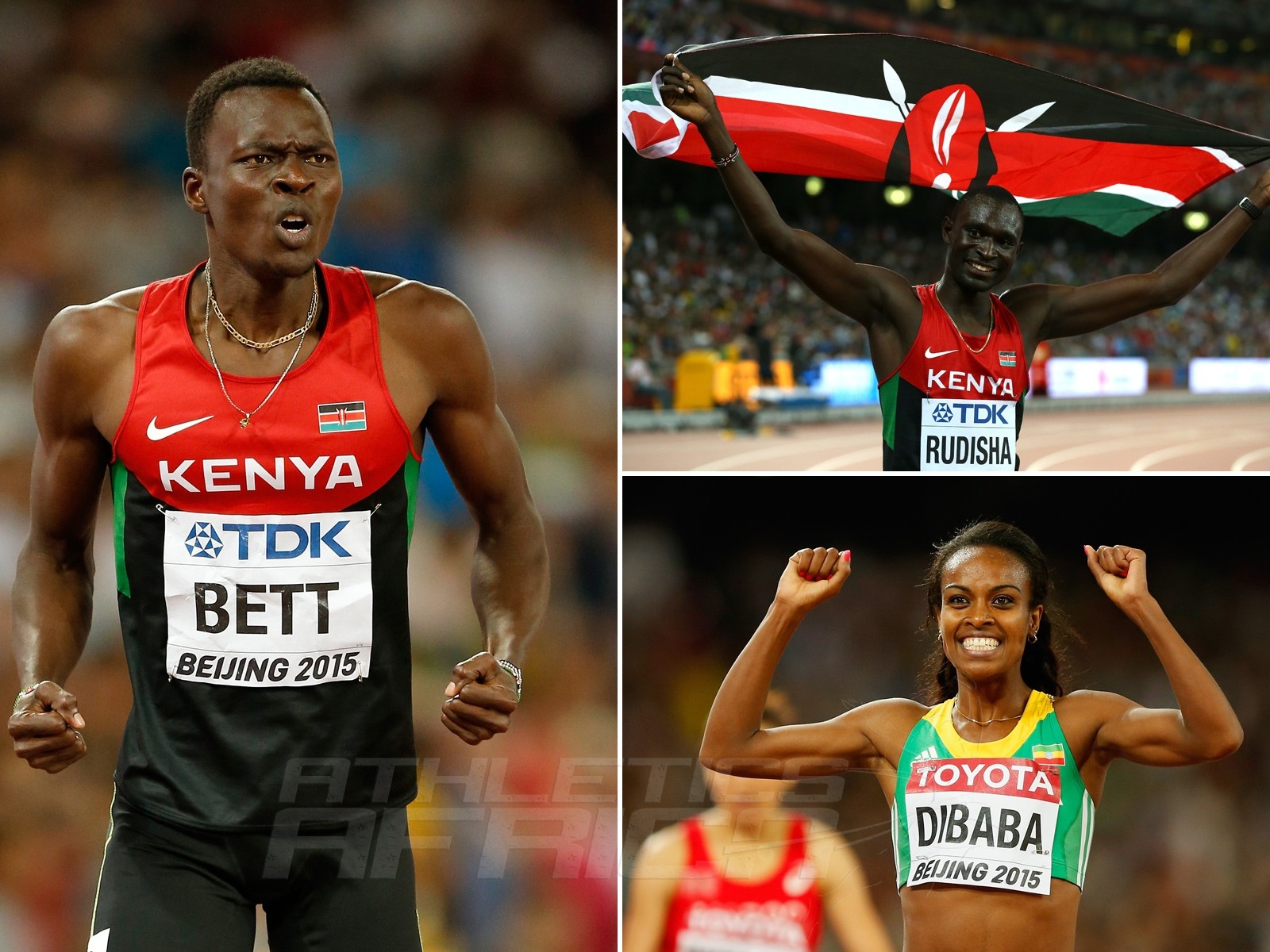 African winners on Day 4 at the 2015 IAAF World Championships in Beijing, China / Photo credit: Getty Images for the IAAF

Commonwealth champion [link id=”404″ tax=”post_tag” text=”Faith Chepngetich Kipyegon”] from [link id=”81″ tax=”category” text=”Kenya”] fought her way to the finish line to take silver medal in 4:08.96 ahead of European champion Sifan Hassan of The Netherlands, who settled for third in 4:09.34.

Kenya’s Olympic champion, David Lekuta Rudisha ran a 51.67 seconds last lap to reclaim the world title with victory in the men’s 800m in a time of 1:45.84.

David Rudisha, who won the world junior title in Beijing in 2006, was majestic as he finally made a successful comeback after two injury-ridden years with another world championships gold medal.

Poland’s 2014 European champion Adam Kszczot took the silver medal with a time of 1:46.08 while the 2015 world leader Amel Tuka grabbed the first IAAF World Championships medal ever for Bosnia and Herzegovina with bronze in 1:46.30.

Kenyan champion Ferguson Cheruiyot Rotich, who defeated [link id=”198″ tax=”post_tag” text=”Rudisha”] at the Kenyan trials in July, spent too much power too early in the race and faded to fourth place in 1:46.35.

“After all these disappointments am delighted about this gold medal, it means a lot to me. It has been a broken season for me. The injury I had wasn’t allowing me to speed off as you know I am a front runner,” said Rudisha after the race.

“When I have the speed like today I can run a tactical race like, whether it’s fast or slow and finish off strong. My speed is back to best and my legs are getting stronger. I have been working a lot on my speed, my confidence and I am glad am where I would wish to be.”

“They were the top favourites coming here and I was expecting to race them, but that is how this race is,” said Rudisha.

“The 800m race is an unforgiving race. Any small mistake you are out. It’s not like the Diamond league where you have the chance to rectify your mistakes in the next meeting. At World championships you have no chance until the next two years,” he added. 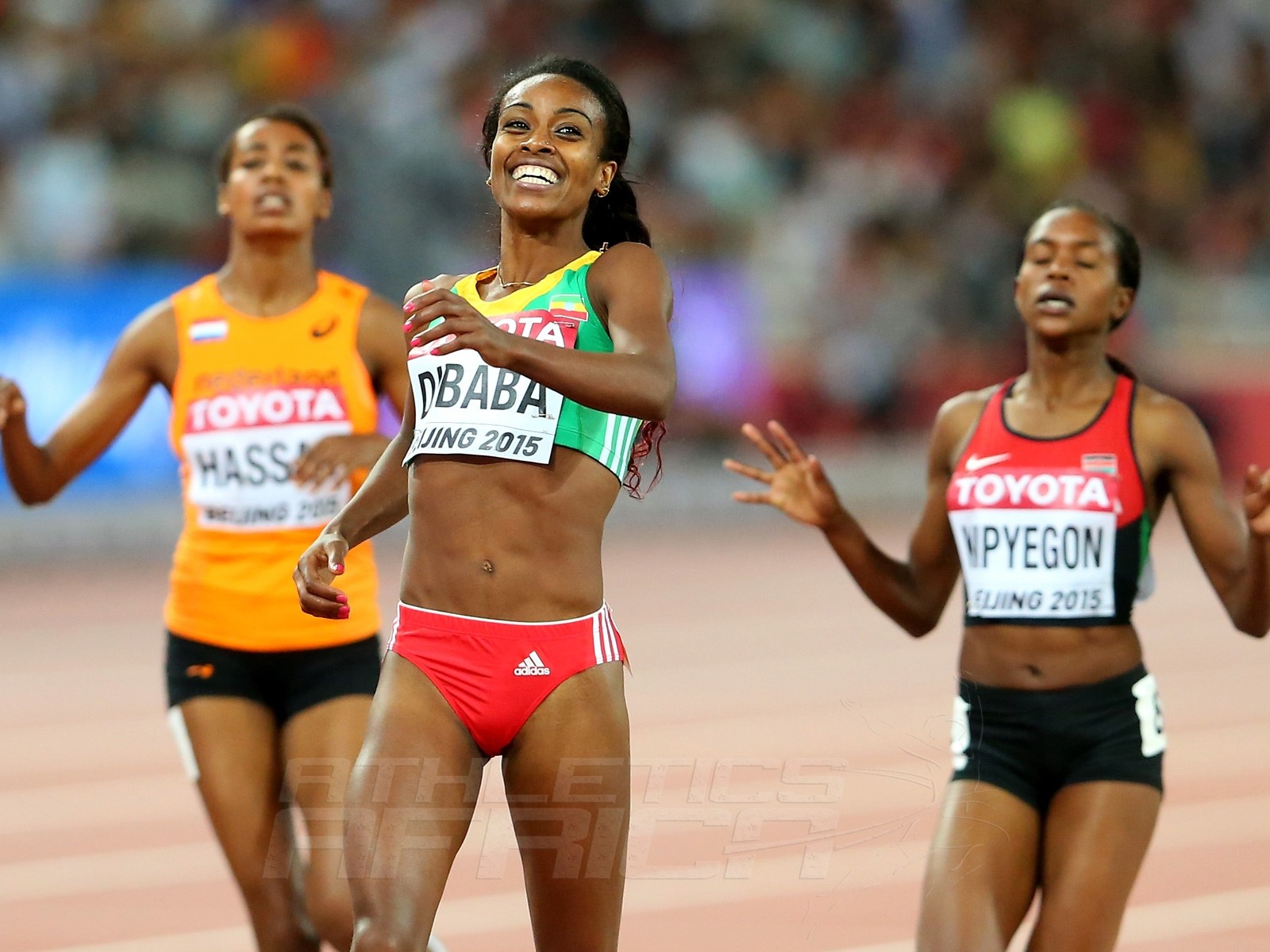 Women’s 1500m final on Day 4 at the 2015 IAAF World Championships in Beijing, China / Photo credit: Getty Images for the IAAF 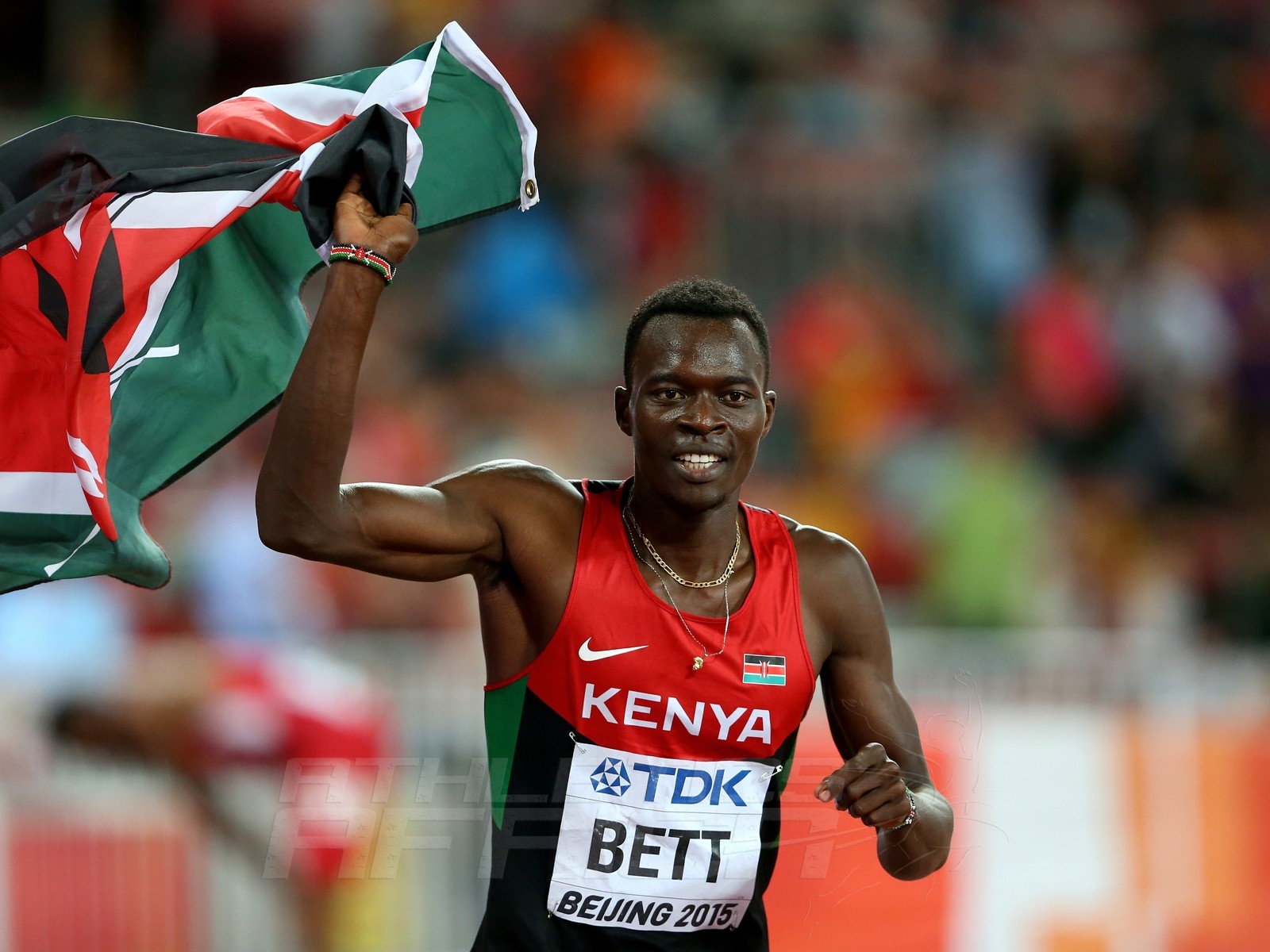 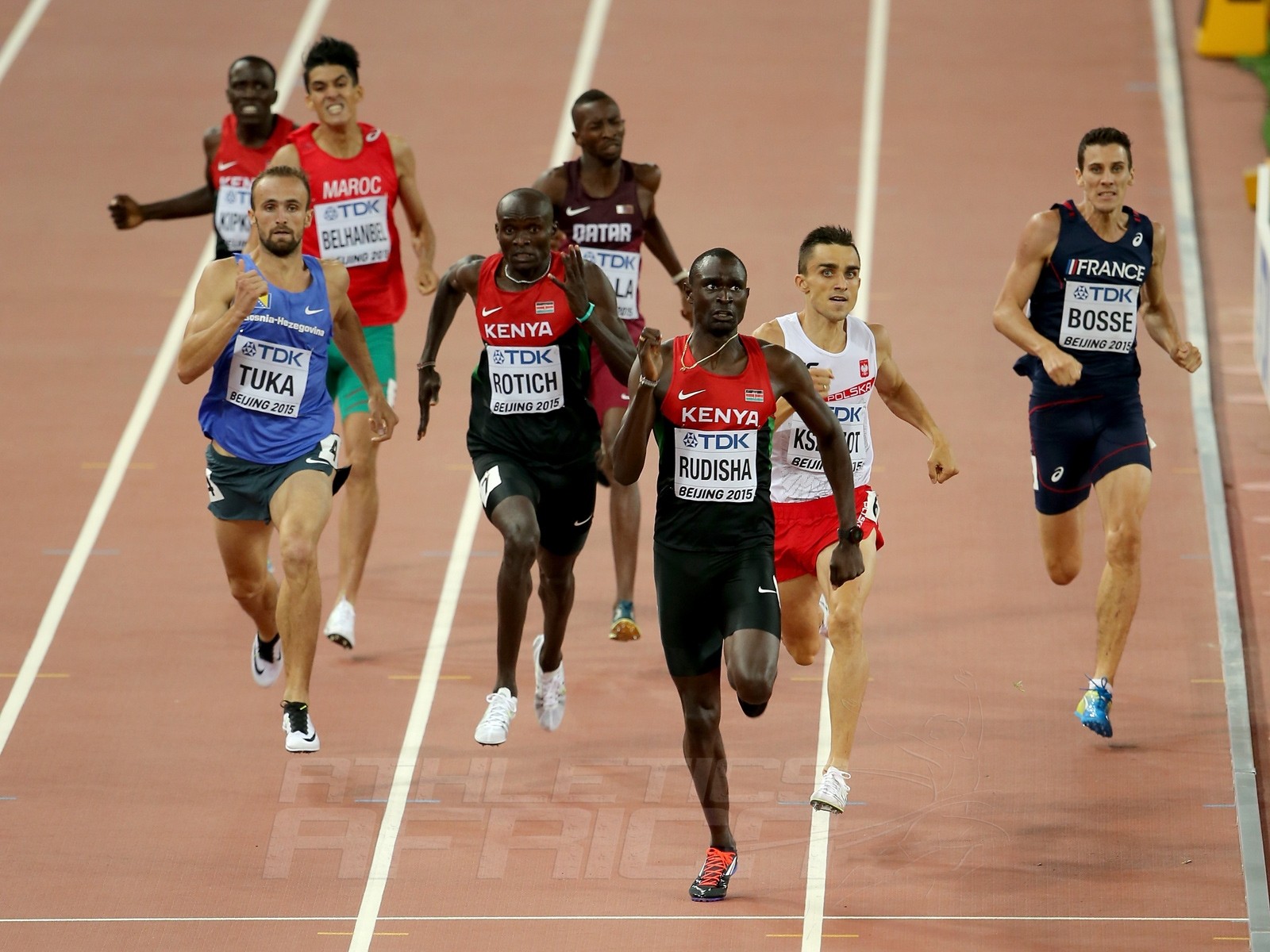 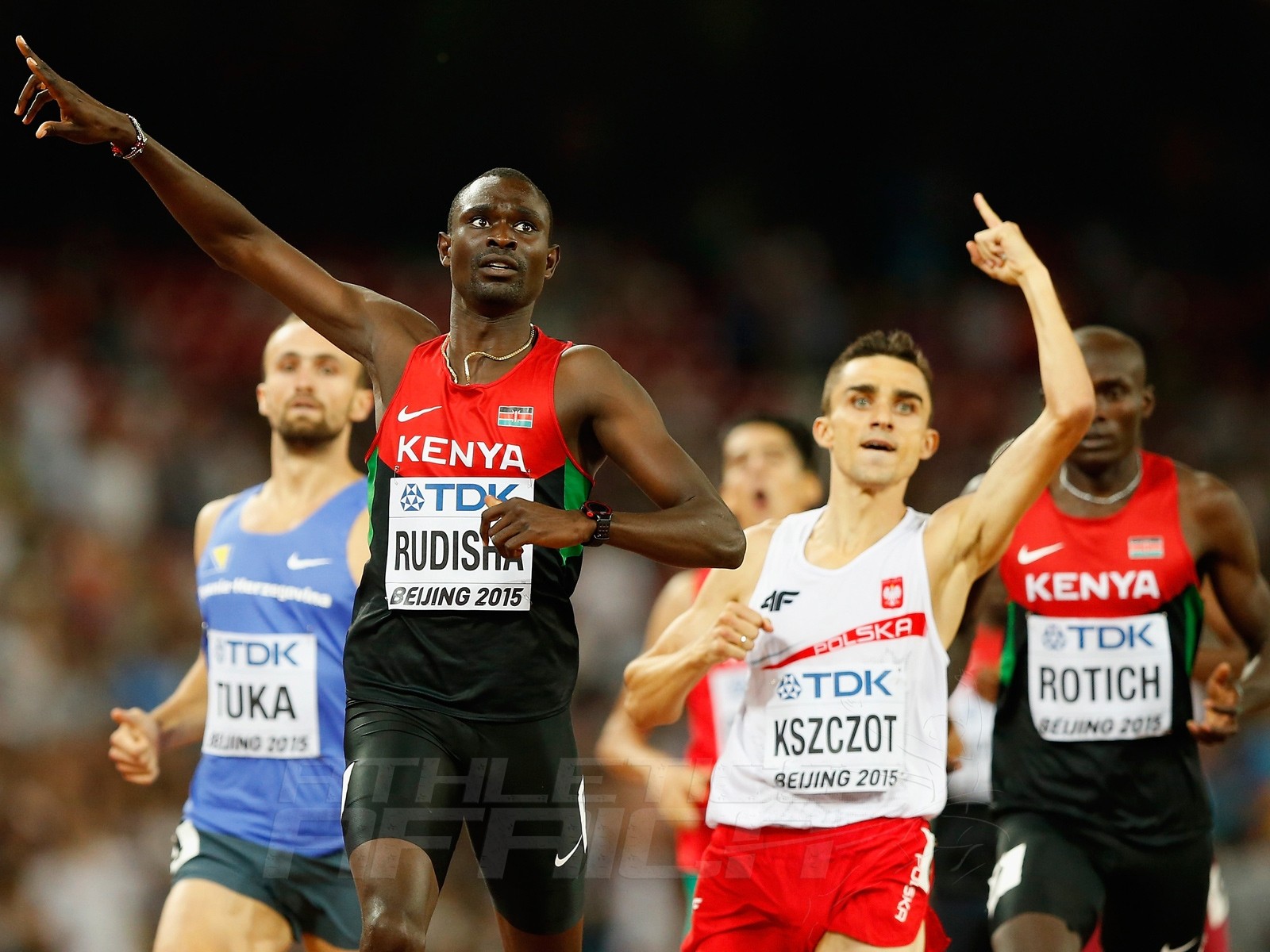 Kenya’s [link id=”196″ tax=”post_tag” text=”Nicholas Bett”] wrote his name into the history books with a stunning finish off the final hurdle to win the men’s 400m hurdles in a national record and world-leading time of 47.79 secs in Beijing.

Bett, running blind from Lane 9 and not seeing anybody until about the last 100 metres, took 0.44 off Erick Keter’s Kenyan record which had stood for 22 years since the 1993 IAAF World Championships.

Bett’s winning mark was also the fastest time in the world since the last final in Moscow two years ago.

Denis Kudryavtsev clocked 48.05, taking 0.01 off a Russian record which had stood for 17 years, to take the silver medal in 48.05 ahead of Jeffrey Gibson, from The Bahamas, who took third place in a national record of 48.17, his second successive national record after running 48.37 in the semi-finals.

USA’s 2007 and 2009 world champion Kerron Clement finished in fourth place in 48.18 while another Kenyan Boniface Mucheru Tumuti came fifth in 48.33.