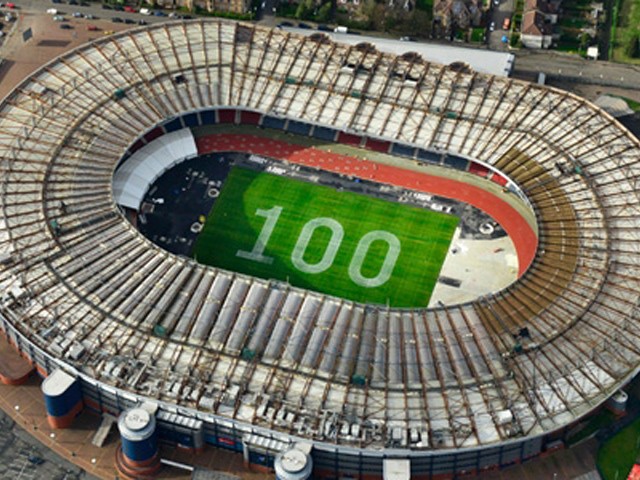 Glasgow 2014 organisers today marked 100 days to go until the start of the XX Commonwealth Games with a stunning aerial shot of Hampden Park, Scotland’s National Stadium temporarily transformed into an Athletics venue for the Games.

The venue for Track and Field had a giant ‘100’ painted onto the grass infield for an iconic image which shows the still in-construction running track for the first time.

Hampden will be the centrepiece of the [link id=”286″ tax=”post_tag” text=”Glasgow 2014 “]Games, from July 23 to August 3, 2014, with more than a thousand athletes going all out for Gold and glory in over 48 events in seven days of competition.

A revolutionary solution has raised the stadium surface by almost two metres, gaining the width and length required for a world-class Athletics arena.

The aerial pictures also offer a view of Lesser Hampden, which has seen the construction of a new pavilion and will provide athletes with warm-up facilities.

With the clock counting down to the start of the Games, Glasgow 2014 will later today reveal the creative elements that will form the Glasgow 2014 Commonwealth Games Medal Ceremony, including the unveiling of the athletes’ ultimate prize – the Medals themselves.

Lord Smith of Kelvin, KT, Glasgow 2014 Chairman, said: “It is now just 100 Days to Go until the start of the Glasgow 2014 Commonwealth Games, the biggest sporting and cultural festival Scotland has ever hosted and the UK’s next big sporting occasion.

“We are entering the home straight now and these last 100 days are our opportunity to do the final work necessary to ensure that we deliver an outstanding Games for Glasgow, Scotland and the Commonwealth.”

Hampden Park closed its doors in December and diggers moved in to remove the stadium’s turf. Around 6,000 steel stilts were put in place to raise the surface by about 6ft (2m), creating the width and length required for an IAAF-approved track.