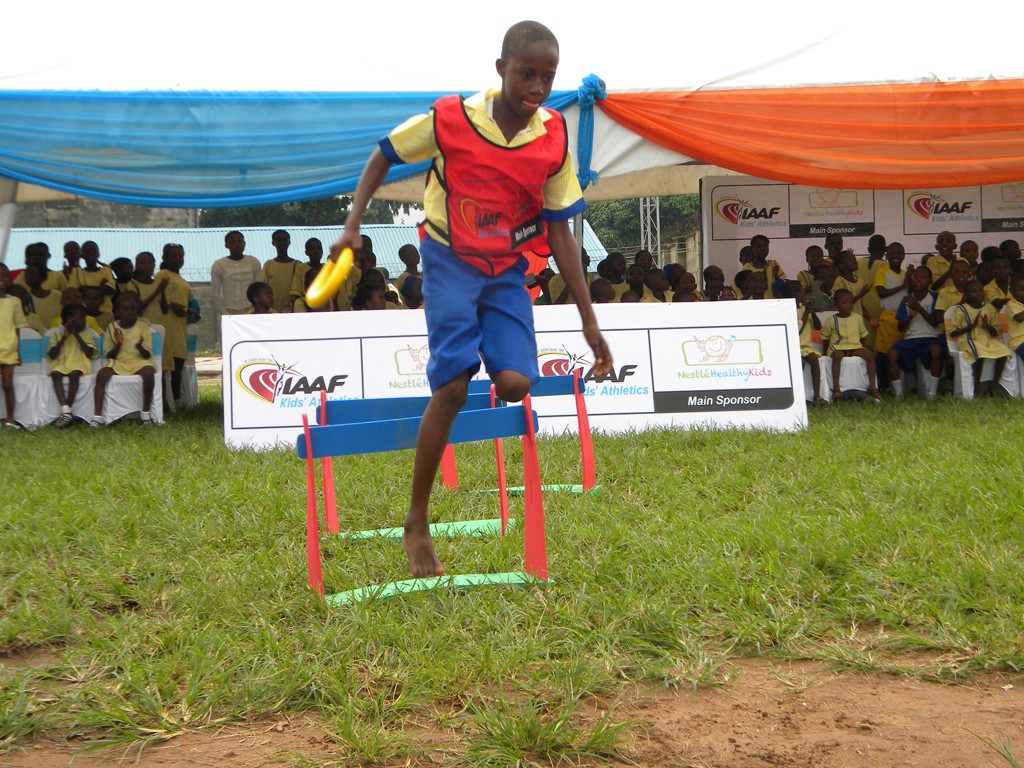 Flag off of the IAAF/Nestle Healthy Kids Athletics in Lagos on 25/07 2013. Photo Sunday Eshiet

The dwindling fortunes being witnessed in Nigeria’s athletic scene could soon be a thing of the past with the newly activated Nestle/IAAF Kids Athletics programme, stakeholders have posited.

At the official launching of the global initiative in Lagos Nigeria on Thursday July 25, 2013, the Nigerian Sports Minister, Honourable Bolaji Abdullahi, challenged the Athletics Federation of Nigeria (AFN) to seize this new opportunity to produce fresh big names that would replace the likes of Yusuf Ali whose long jump record and remained for over two decades.

Represented by the Director in-charge of Youth Development in the NSC, Alhassan Yakmut, the Minister was full of praises for Nestle for coming to the aid of athletics in the country.

“I want to say a big thank you to Nestle for this noble project which I hear is a global thing, here in Nigeria I will like to appeal to the AFN and other bodies concerned that we have to seize this opportunity and make the best from it. The sports minister’s representative stated.

On his part, the AFN President Chief Solomon Ogba reiterated that the target for his board remains building a lasting legacy that will endure the test of time which is why the Federation has decided to go back to the grass roots where talents abound.

Represented at the flag-off ceremony by the AFN Vice President, Alhaji Tunde Abdulkareem, the Athletics Federation board said they aim to produce the Mary Onyali’s, Falilat Ogunkoya’s, Yusuf Ali’s and Blessing Okagbare’s of the next generation from the newly activated Nestle programme.

“We believe that with such a program in place we are on course,” said Abdulkareem.

“This partnership is expected to go a long way to produce future Olympians that will represent our nation in the nearest future”.

In his own remarks, the Managing Director and CEO of Nestle Nigeria Plc, Mr Dharnesh Gordhon explained that the new programme hopes to ‘catch them young’ for three age categories; 7-8 years, 9-10 years and 11-12 years.

“Nestle will provide the financial support for the further development of IAAF Kid’s Athletics which is one of the biggest grassroots development programmes in the World of sports,” Mr Dharnesh stated.

The Nestle -IAAF Kids programme among other things hope to make athletics the number one participation sports in schools and also attract and sustain the potential sporting stars of tomorrow.