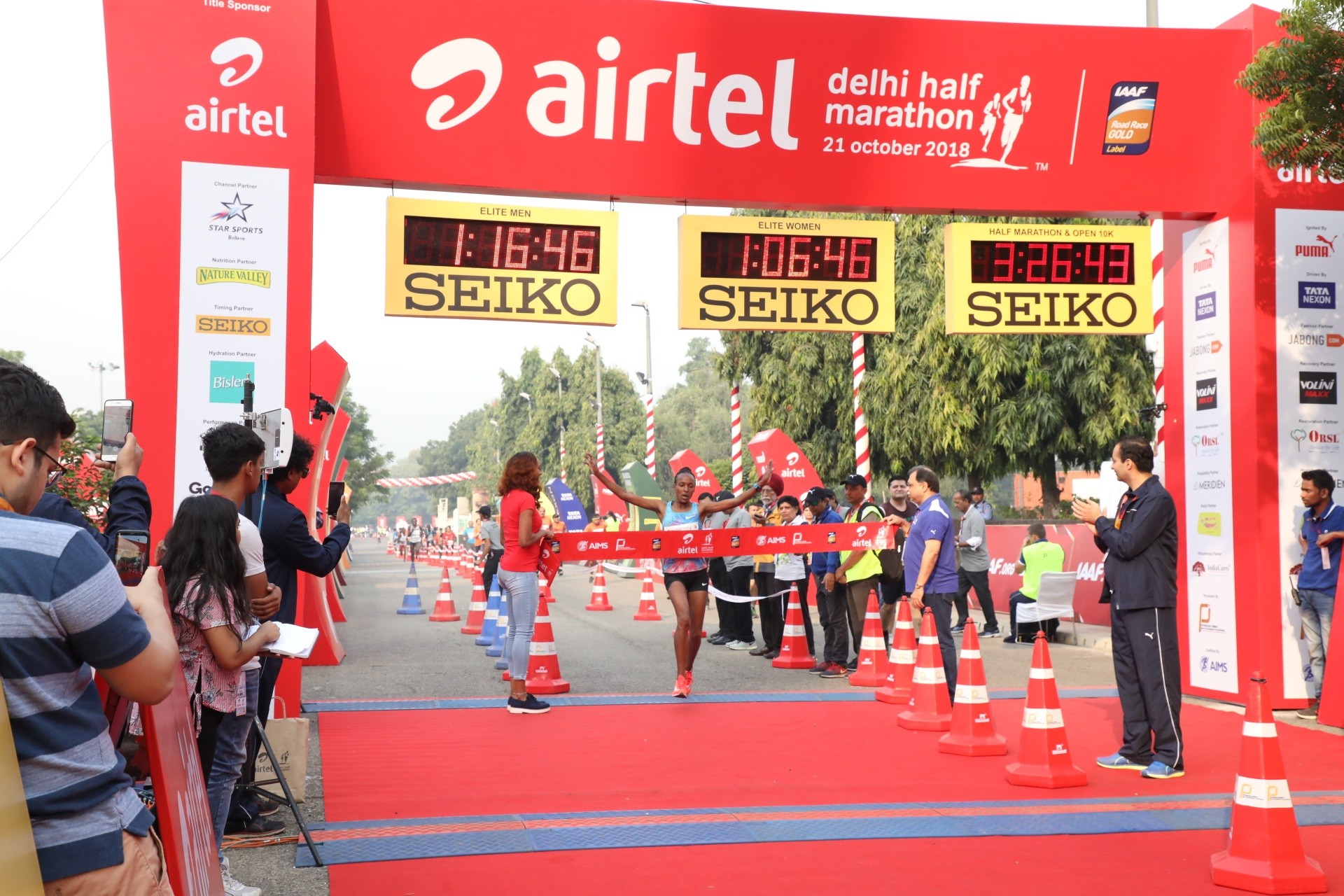 The pre-race publicity for the Airtel Delhi Half Marathon 2018 focussed on a duel between Ethiopia’s Tirunesh Dibaba and Kenya’s Joyciline Jepkosgei, quite rightly considering their careers and 2018 racing records, but Dibaba’s compatriot Tsehay Gemechu hadn’t read the script and flew to a course record of 1:06:50 on Sunday.

Gemechu, running her first half marathon, took four seconds off the nine-year-old previous record for the IAAF Gold Label Road Race, set by Kenya’s Mary Keitany in 2009, to take the USD$27,000 first prize in the richest half marathon in the world.

In a race full of drama and surprises, the 20-year-old Ethiopian outsprinted the world record holder Jepkosgei in the final few hundred metres, the latter taking second place in 1:06:56, with Ethiopia’s Zeineba Yimer running a strong final five kilometres to take third in 1:06:59.

The first shock was the sight of the three-time Olympic champion Dibaba visibly starting to struggle as early as the 5km mark, clinging on to the back of the women’s leading group.

She was still hanging on at 10km as a pack of eight, assisted by male pacemaker Timothy Kutto, went through that checkpoint in 31:42 but she soon became detached and ceased to be a factor in the women’s race.

At 19km, Teferi had a 12-second advantage over the chasing pair of Gemechu and Jepkosgei who seemingly were battling for second place.

However, with little more than one kilometre to go, Teferi started to slow dramatic and was soon barely raising her gait above walking pace.

Teferi drifted to the side of the road and with about 700 metres to almost came to a halt as Gemechu and Jepkosgei sped past her before dropping out due to dehydration, although she recovered quickly after getting treatment.

Gemechu then showed her speed honed over three quick and high quality 10km races earlier in the year and shook off the world record holder for 10km and the half marathon as the finish line in the Jawahrlal Nehru Stadium approached.

“To be honest, I hadn’t changed my training to do this race so I’m surprised that I won and ran so fast,” said the beaming Gemechu.

“When we went past Teferi, I actually thought it was a tactic, that she was slowing and was going to run with us before sprinting,” she added.

Jepkosgei confessed that she had not even noticed Teferi as she went past her, focussing on her immediate Ethiopian rival Gemechu and thinking that they were battling for second place.

“I was just focusing on my own race and I didn’t notice her (Teferi),” said the Kenyan. “I may not have won but I’m happy with my race and the time,” she added.

Preceding his compatriot across the line, Andamlak Belihu started the Ethiopian success story in the Indian capital on Sunday with an assured run over the final third of the race, having pushed the pace from just after the halfway point.

At 15km, passed in 42:41, four men were together – Belihu and his fellow Ethiopian Amdework Walelegn, Kenya’s Daniel Kipchumba and Eritrea’s Aron Kifle – but soon Belihu pushed again and only Walelegn could follow him.

The two 19-year-olds stayed together, although Belihu always looked the more comfortable and confident, until the final 250 metres when the eventual winner turned the screw again and crossed the line in 59:18 with Walelegn finishing four seconds behind him in 59:22.

“After finishing second last year, I came here determined to win and I was looking at the course record (59:06 by Ethiopia’s Guye Adola in 2014) but the pacemakers in the first half of the race didn’t do a good job,” said Belihu, despite the fact that the leaders were taken through 10km in 28:01.

“As for next year, I’m not going to move up to the marathon just yet. I have the World Cross Country Championships and 10,000m on the track at the world championships next summer as my targets,” he added.

Kipchumba and Kifle also broke the hour in Delhi with 59:48 and 59:50 in third and fourth respectively, to emphasise the depth and quality of the race and potential for running quick times on the course.