The Eyes of the World turn to Vienna: “There is only one Kipchoge“ – AthleticsAfrica 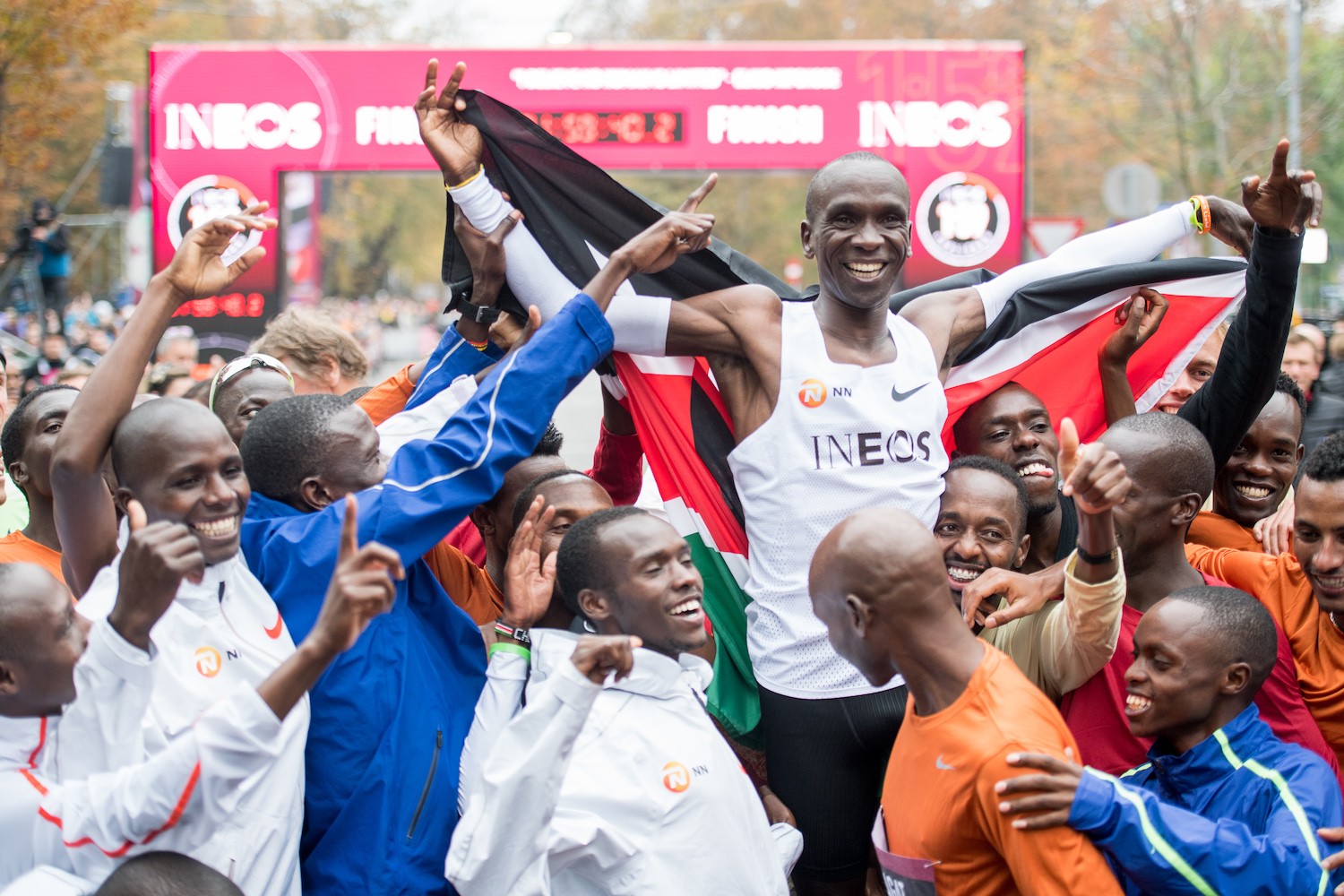 Eliud Kipchoge broke one of the greatest barriers in sport history in a thrilling performance in Vienna when 34-year-old Kenyan became the first to run the classic marathon distance in under two hours.

To the jubilation of the spectators this exceptional athlete ran 1:59:40.2 in the INEOS 1:59 Challenge in Vienna’s Prater Park on Saturday.

It was a run which made the world hold its breath in fascination and will give the entire sport of running a huge boost. Although the time cannot be accepted as an official world record, the performance is unique: Eliud Kipchoge ran a marathon in under two hours.

The event was made possible by its British title sponsor INEOS, who covered all financial costs and the organizing team of the Vienna City Marathon who conjured up magic to stage this event.

“We are proud of you,” said Kenya’s Vice-President William Ruto to Eliud Kipchoge at a party on Saturday evening near the finish line in Prater Park.

The Vice-President had travelled to Vienna specially to experience Eliud Kipchoge’s run. That showed something of the importance which this race had for Kenya. It was for Kenyans the equivalent of what would be winning the football World Cup for Germans.

“I stood at the finish line and looked down the road. The clock was ticking and showed 1:58 – you were nowhere to be seen…” explained William Ruto about the closing stages. “I asked myself: Where are you? What are we going to say if you don’t do it? Thank you, that you have made this possible!” Ruto added to the amusement of the guests: “You must give yourself time to recover – but we all need to recover from our anxiety.”

The Vice-President added: “We are celebrating here in style in Vienna – but that is nothing compared to the joy in Kenya.” Videos online showed thousands of people freaking out at a public viewing in Eldoret.

In the capital Nairobi, the traffic came to standstill in some parts because people were dancing in the street. And even in Vienna there were people outside Eliud Kipchoge’s hotel at one in the morning, singing at the top of their voices: “There’s only one Kipchoge.”

Wolfgang Konrad, head of the Vienna City Marathon which takes place in April each year, said: “Thank you, Eliud! This is indescribable. This event will be remembered for generations. Everyone who was at the finish line couldn’t help but be thrilled.

Vienna is now the home of the fastest marathon in the world and will always be linked with the first 1:59 marathon. I am sure many runners, now they know these surroundings, will want to run here. The entire race is a fantastic worldwide advertisement for the sport of running and Vienna.”

Eliud Kipchoge thanked everyone involved who had supported him on the way to achieving his marathon dream – especially his pacemakers: “We came together as a team and that’s what made it possible. I’ve showed: No Human is limited. I was the first. But I now believe that there will be other athletes who will run under two hours.”

Before the INEOS 1:59 Challenge, Eliud Kipchoge, had made clear that this would not be his last marathon. In all probability the Kenyan will run at the Olympic Games in Tokyo next year where he is the defending champion in the marathon.

Given the brutal weather conditions which can be expected in Tokyo in mid-summer, his Dutch manager Jos Hermens commented: “We then have to see how he comes through them.”

For that reason it is not foreseeable at present when and if at all Eliud Kipchoge might undertake another attempt to attack the two hour barrier under conditions which confirm to record requirements. The asphalt which was laid specially for the race on Prater Park’s newly tarmacked Hauptallee should certainly last for a couple of years.