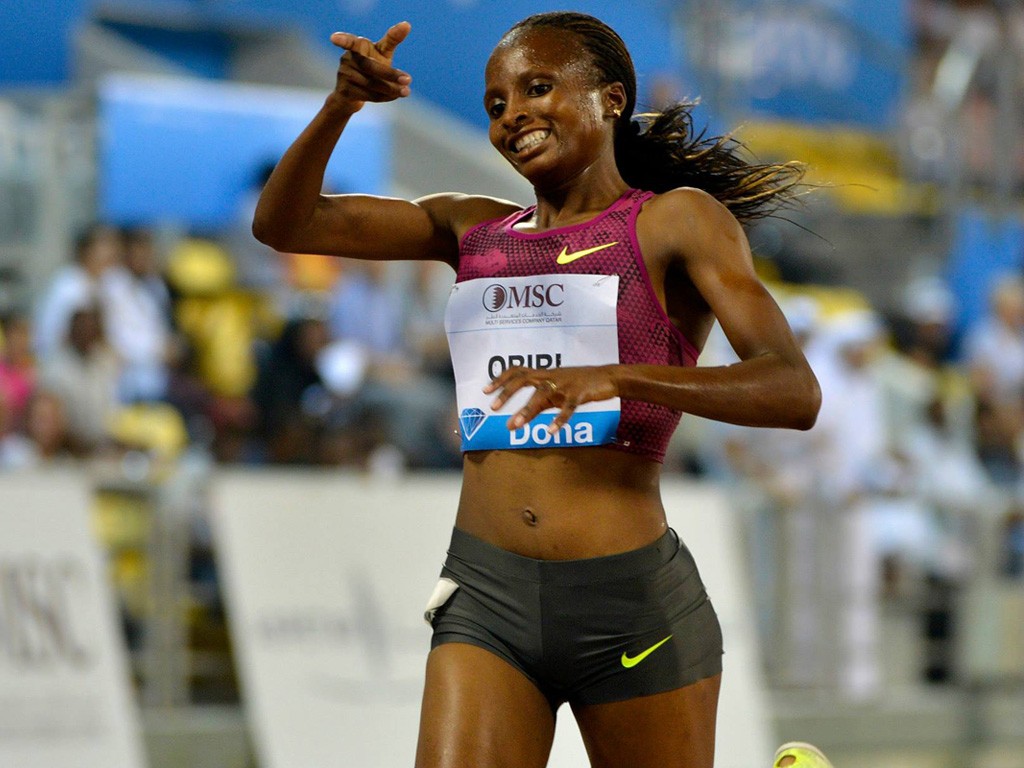 Hellen Onsando Obiri sets a new African and Kenyan record in the women’s 3000m at the Doha leg of the 2014 IAAF Diamond League on Friday night as she led a Kenya sweep home.

Hellen Obiri and her Kenyan compatriots absolutely crushed the world Indoor 3000m champion and record-holder, [link id=”379″ tax=”post_tag” text=”Genzebe Dibaba”] of Ethiopia in the last 200m as the Ethiopian collapsed into 6th place at the finish, despite running a personal best.

Almaz Ayana finished as first Ethiopian home in fifth place – her time of 8:24.58 being a personal best, as was Dibaba’s effort of 8:26.21, well inside her previous best outdoor mark from last year of 8:37.00.

“I don’t know what went wrong,” Dibaba said after the race. “I didn’t feel good from the beginning of the race.”

I am proud that I managed to break the meet record and I am also aiming to attack my PB this season. My biggest target is to defend my world title in Beijing next year. Now, important competition will be the World Relays for me.” [Asbel Kiprop]

However, the major upset of the day was not the defeat of the World indoor record-holder, Genzebe Dibaba, but the crushing victory of little-known Nigerian-born [link id=”147″ tax=”post_tag” text=”Kemi Adekoya”], running for Bahrain, ahead of more established names.

Kemi Adekoya clocked a world leading 54.59 secs to win the women’s 400m hurdles with Jamaica’s Kaliese Spencer second in 55.07 and Eilidh Child of Great Britain third in 55.43 secs. Race favourite, Lashinda Demus of the USA could only finished fourth in a season’s best 55.67 secs.

Adekoya, 21, who has been training all winter in Bahrain, said she ‘did not expect to win the race’.

“There are so many great professional athletes running here and I was so scared to run against them. I can tell you I really pushed like never before. And I am ready to show even more of it.

“I am aiming at 53 seconds now and I know I am able to do it. It will surely happen. The heat was no problem for me and I hope that I will fight for the Diamond Trophy also at later meetings,” she added.

Kiprop’s compatriot Silas Kiplagat, who had set the meeting record of 3:29.63 the previous year, moved through to take second place in 3:29.70, with Souleiman being rewarded in third place with a national record of 3:30.16.

“Everybody was running so fast and all the guys were so strong today. With all the great atmosphere, full stadium, great weather – I think it was the race to see here in Doha today, says Asbel Kiprop after the race.

“I am proud that I managed to break the meet record and I am also aiming to attack my PB this season. My biggest target is to defend my world title in Beijing next year. Now, important competition will be the World Relays for me.”