Lagat and Alemu triumph at the Tata Mumbai Marathon 2019 – AthleticsAfrica 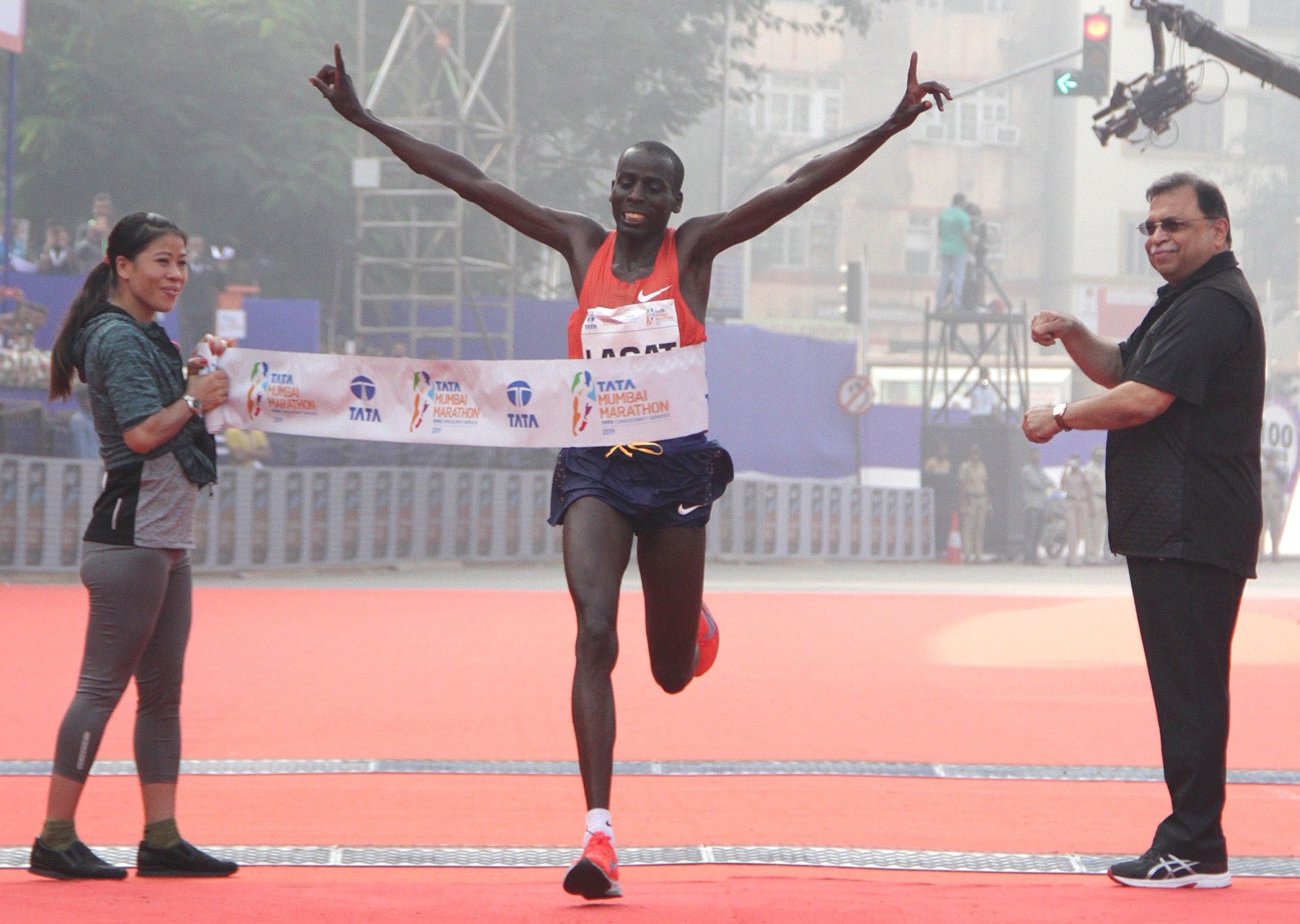 Kenya’s Cosmas Lagat and Ethiopia’s Worknesh Alemu surprised the pundits and produced outstanding performances in hot conditions to triumph at the Tata Mumbai Marathon 2019, winning in 2:09:15 and 2:25.45 respectively.

Both marks were the second fastest winning times in the history of the IAAF Gold Label Road Race, the pair taking first prize cheques of USD $45,000 in India’s richest road race.

With temperatures higher than expected and reaching 23 degrees Celsius when the gun went, the men’s race naturally started steadily and a large pack of 14 runners – including three pacemakers – went through 10km in 30:53, 20km in 1:02:18 and the halfway point in 1:05:15.

However, Lagat made a decisive surge just before 29 kilometres and quickly put daylight between himself and his rivals as well as partially splitting up the leading pack.

Lagat passed 30km in 1:32:34, assisted by two pacemakers who he kept instructing to go faster, with a chasing pack of seven men 11 seconds behind.

The remaining pacemakers were to drop out at around 32 kilometres but Lagat bravely pressed on and kept on increasing the gap, to almost 40 seconds by 35km, although later he admitted that despite feeling strong, he spent much of the final 10 kilometres running scared.

“It was a good moment to make a break, but I also knew there were good runners behind me and from 35km I was never sure how close there were to me or whether they were coming back to me,” reflected Lagat.

In fact, at 38km he had almost a minute’s lead before Ethiopia’s Aychew Bantie edged away from his compatriot Shumet Akalnew in the closing kilometres to clinch second and reduce the winning margin to 50 seconds by the finish.

Lagat crossed the line in 2:09:15 for his third win over the classic distance in six outings – his other two victories also coming in hot weather conditions in the Spanish city of Sevilla – with Bantie second in 2:10:05 and Akalnew third in 2:10:14.

“I thought Lagat might come back to us in the last kilometres because he had changed his pace so quickly and he ran so fast (between 29km and 35km) but after 35km I knew I was running for second place,” said Bantie.

Pre-race favourite Abera Kuma, the fastest man in the field with a best of 2:05:50, drifted away from the leading pack just after 30km and from that point was never in contention for a place on the podium, eventually finishing seventh in 2:13:10. 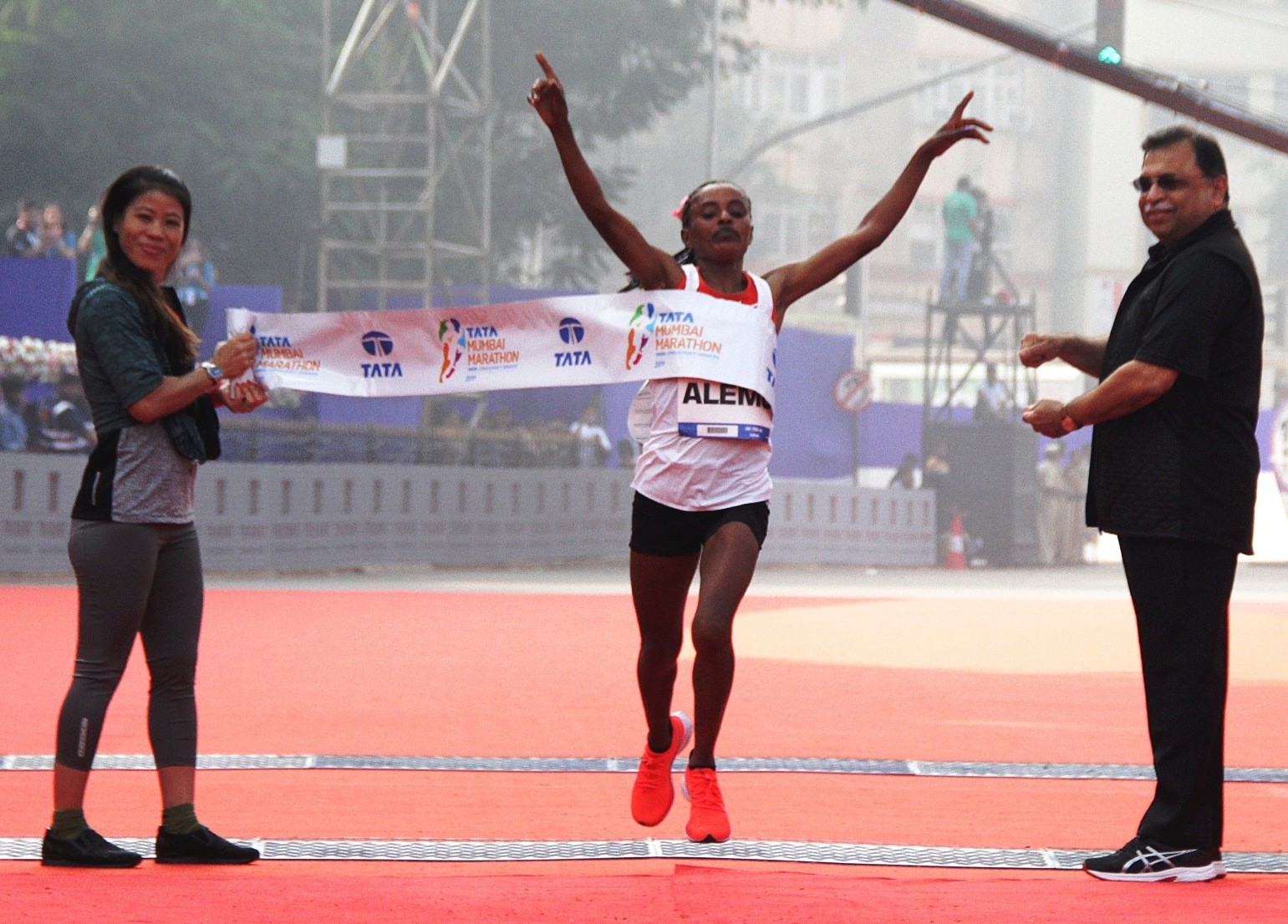 In contrast to the men’s race, the leading women started with a flourish and the sizable leading pack with their male pacemakers went through 10km in 34:28, 20km in 1:08:42.

Four women were still in contention at 30km (no official halfway split given) – Alemu and her Ethiopian compatriots: pre-race favourite Amane Gobena, Birke Debele and Mergetu Alemu – which was passed in 1:43:14, still giving hope that the course record of 2:24:33 set by Kenya’s Valentine Kipketer in 2013 could be challenged.

Mergetu Alemu soon dropped off the pace and a couple of kilometres down the road so too did Debele but Gobena dogged hung for two kilometres more until Worknesh Alemu made a second and decisive surge just before 35km.

Alemu shook off Gobena but given the credentials of her rival and the intensity of the conditions, with temperatures by now having risen to 26 degrees, nothing was certain but she maintained her focus to clock an impressive personal best of 2:25:45 and finishing 24 seconds ahead of the 2018 Tata Mumbai Marathon champion, who finished second in 2:26:09 despite later saying that she had been suffering from stomach problems over the final 10 kilometres.

Debele hung on for third in 2:26:39 as Ethiopian runners filled the first seven slots.

India’s Sudha Singh finished eighth in 2:34:56, an Indian best in Mumbai, a personal best and the second fastest time by an Indian woman ever, just 13 seconds away from the Indian national record.

As magnificent as Singh’s performance was by local standards – and she booked her place on the team going to the IAAF World Championships 2017 in September – she might be left to rue her cautious first half, running more than seven minutes behind the leading pack, before uncorking a huge negative split by almost six minutes from the halfway point onwards. 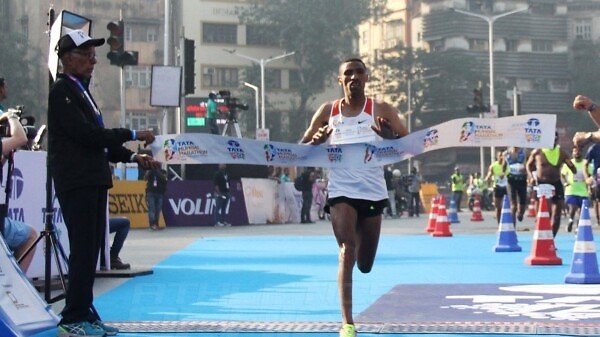 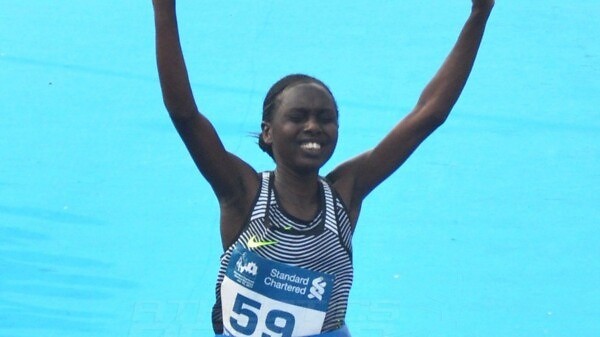