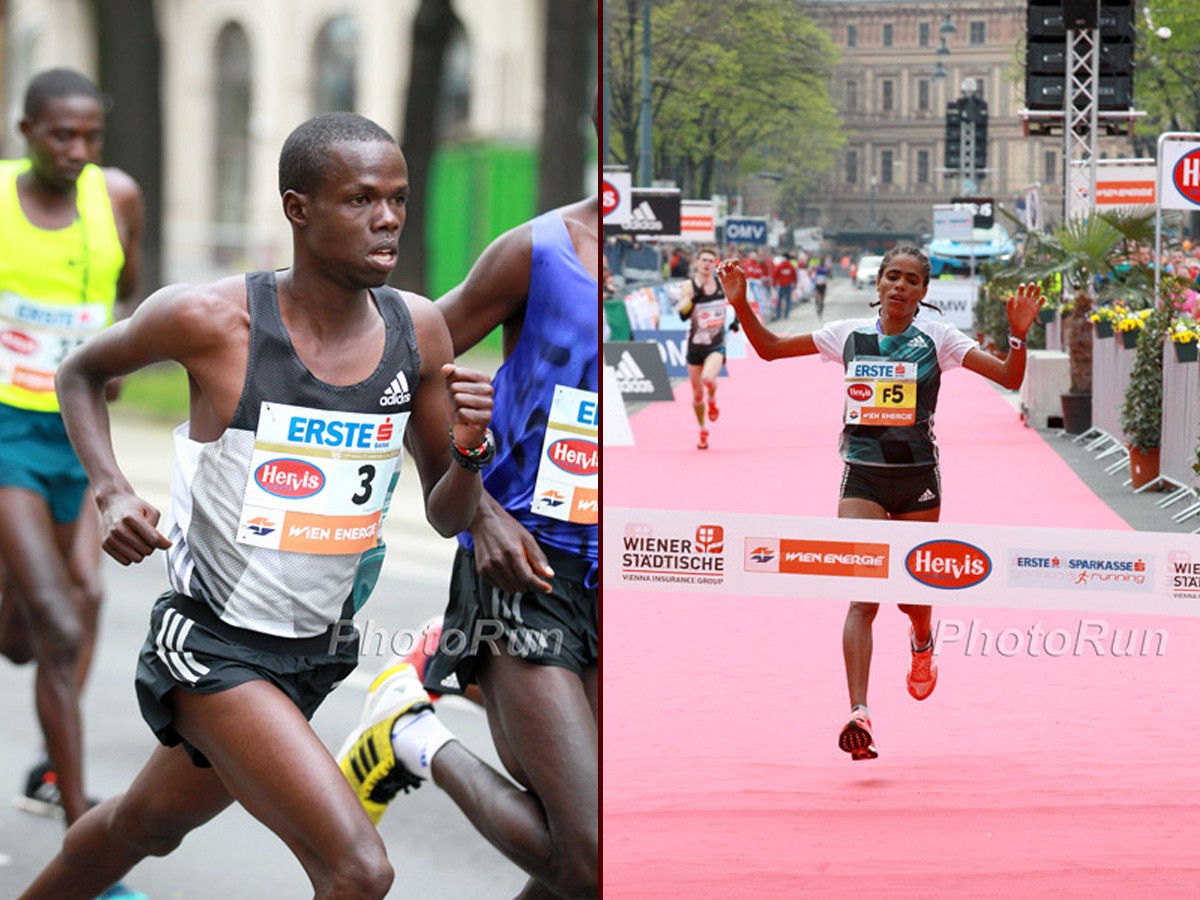 Robert Chemosin won the Vienna City Marathon, clocking a fine 2:09:48 in very windy conditions. After two Ethiopian victories in the past two years this edition was dominated by the Kenyans again.

This is the second highest entry figure in the history of the race and just around 200 runners short of the record. It is the fourth time in a row that the [link id=”116″ tax=”post_tag” text=”Vienna City Marathon “] registered more than 40,000 athletes.

Despite the wind blowing off banners on the course before the start of the race the men’s leaders tried their best to stick to the planned pace.

In wind gusts of up to 45 kilometres per hour a group of two pacemakers and seven contenders reached the half way mark in 63:59. While they were still on course for a sub 2:08 finish hopes for a fast time were soon blown away.

A 30k split time of 1:31:35 indicated that the winning time would be more like 2:09 than 2:07 and with continuing winds the pace dropped further.

While highly regarded debutant David Kogei of Kenya, who features a half marathon PB of 59:46 was dropped before the 20k mark and later dropped out with back problems at 30k, the fastest runner in the field lost contact just before the 30k mark.

It looked decisive as he was able to build a lead, but Chemosin and Cheruiyot caught him again. Without Simotwo’s efforts the winning time would probably have been around 2:11 instead of sub 2:10.

But the Kenyan had lost too much energy with his surges and could not respond when Robert Chemosin broke away with three kilometres to go.

The best result of the day came in the women’s race and it was a surprise that Shuko Genemo was the one who produced it. Right from the start the Ethiopian was running in the leading group, passing 10k in 34:17.

Fellow-Ethiopians Ruti Aga, Guteni Shone and Meseret Kitata as well as Kenya’s Doris Changeywo were also in the group. While Kitata fell behind before 15k it was then Shone who was dropped just before half way (72:10).

The women’s leaders were running a pace that was not far off the 16 year-old course record of 2:23:47. But in the blustery conditions there was no chance to improve this time.

Changeywo, who had entered with a PB of 2:44:26 from her debut race in Singapore, lost contact after 25k and was then a minute behind the leaders at 30k.

“It was cold and windy, which made it difficult to run fast. In perfect conditions I could have run 2:22 today,” said Shuko Genemo.