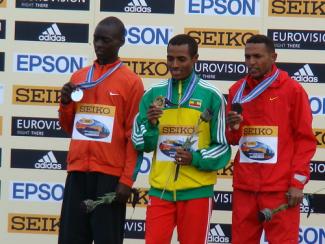 Ethiopia’s Kenenisa Bekele has won a record sixth senior men’s 12km title and US$30,000, despite a series of obstacles, at the 36th IAAF World Cross Country Championships at Holyrood Park in Edinburgh.

Bekele overcame, in turn, a missed connection flight from London Heathrow, an overnight stomach troubles, a dislodged shoe early in the 12km race, and the spirited endeavours of defending champion Zersenay Tadese Tadese’s to regain the title he had won in five successive years from 2002 to 2006, until he lost to Tadese in heat of Mombasa in 2007.

With this victory, he now has a record number of individual World Cross Country titles to 12 (6 Long Course, 5 five Short Course, 1 Junior).

Bekele’s total number of World Cross Country gold medals now stands at 16 and his record total at 27 (16 gold, 9 silver, 2 bronze) ahead of Kenyans John Ngugi and Paul Tergat with five gold medals each.

Bekele said after the race: “It was very tough. In a group, you cannot control your legs. Maybe somebody might tough the back of your legs and your shoe comes off.

“But it was at the beginning of the race, I wasn’t tired and I was able to recover.

“It’s not easy, I have won double gold medals five times at this competition but this one is very special for me. Everybody all over the world wa

s expecting me to win,” he added.

About the flight delay and the stomach troubles, Bekele said: “The day before yesterday, as I was flying in from Ethiopia, there was a delay and I spent the night in London and arrived here yesterday about midday.